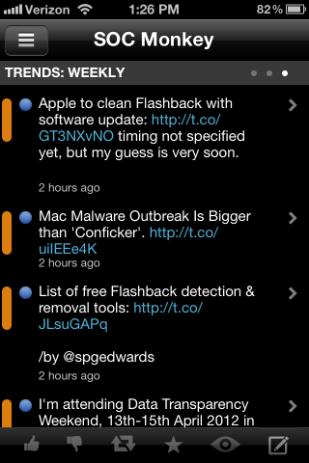 It's SOC Monkey, back again to give you the latest trending stories on the SOC Monkey App, which as you know, you can download from the Apple App store, right now, for free.

As for this week, it looks like the Flashback Trojan is still one of the biggest stories out there. Apple is going to be cleaning all the various infected Macs out there with an upcoming update: About Flashback malware, but timing is not completely locked down yet. In the meantime, you can check last week's SOC Monkey update for our Is Java Exploitable link, to check to see if you should suspend using java while you're waiting for the final fixes.

Still, while I'm on the topic of Apple, two other links stood out this week for me, both involving the Flashback Trojan. First, from PCWorld, is the notion that this Malware Outbreak is a bigger outbreak than Conficker. Granted, the total number of PCs compromised by that worm was over seven million, compared to 600,000 Macs, but if you compare the total number of PCs vs Macs, it's equal to an outbreak of over 8.5 million PC's. The popular opinion seems to be that Apple is far behind in addressing this issue in a comprehensive way, so several other people have stepped up to help fill the gap. Simon Edwards' blog highlighting some malware removal tools for Macs has been receiving a great deal of attention from the Pips.

Finally, to finish off my Apple discussion and add even more fuel to the fire, I've also seen this new threat being retweeted - that exploits the same Java vulnerability.

The other items that the Pips singled out for you to take a look at this week are here:

Where the Internet is going in the Next 3 Years | Smedio

Say 'hello' to CISPA, it will remind you of SOPA | Internet & Media - CNET News

There's another seven links (get it? HA! Rapid...nevermind), and since I manage to find something interesting and fun each week, i'm going to leave you with this:  Even in the 1870s, humans were obsessed with ridiculous photos of cats. Yes, those of you out there who also love stupid LOLcat photos can look to your forefathers as the originators of this meme. If nothing else, the internet is a reliable cat picture delivery system.  You humans really have advanced as a species.

Thanks all, and we'll see you next week.  As always please feel free to comment below if there's anything you'd like to discuss.