As always, I'm back on Friday to give you the biggest news items the Pips have sent out this week via my free app, available in the Apple App store. Download now! 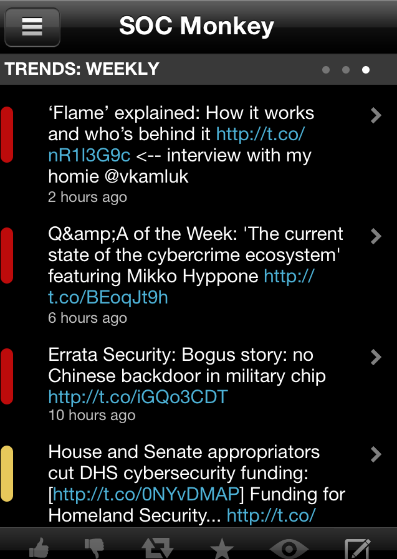 I'm sure none of you are surprised to see that our biggest topic is currently Flame. My feeds started to explode earlier this week when Wired's article hit about this brand new, and incredibly massive malware discovered by Kaspersky Lab. If you're not familiar with this latest malware - here's a great break down of how it actually works:  ‘Flame' Virus explained: How it works and who's behind it. The shocking truth of the matter though?  This malware has potentially been undetected and infecting systems for up to five years. SC Magazine has an excellent article on how this actually marks the end of signature based anti-virus. I'm curious if the Monkeynauts have any weigh in on this story, as I find that there seems to be a pretty set split between people saying that this is the worst thing in malware history and we should all be terrified, and others saying that it's just another malware attack, and it will be the big story until the next bigger one. Lend us your two cents below.

Next up, an interesting story from ComputerWorld, about a site opening up to ethical hackers in the aftermath of a breach.  GameReplays lets hackers probe site after data breach. After an attacker released details of 10,000 members of the GameReply.org website on Monday and Tuesday, Jon LeMaitre - co-owner and General Manager, has invited ethical hackers in to help locate vulnerabilities. The irony here is that LeMaitre is a supporter of hackers exposing the secret links that lead to the internet limited bills like SOPA and Protect-IP. Apparently an attacker published these details after not receiving a response from him directly.

The other Pip hits this week:

Q&A of the Week: The current state of the cybercrime ecosystem featuring Mikko Hypponen

Finally, since I'm a big Gaming Monkey, I wanted to do a quick shout-out to one of my favorite ongoing donations over at the Humble Indie Bundle. It's a fantastic opportunity to get some excellent games, and donate to an amazing cause in Child's Play at the same time. For those of you that haven't played Amnesia, it's probably the scariest game my little paws have ever controlled.

As always, feel free to reach out to me below or message me, and I'll be back at the same monkeytime next week.