Welcome back to your work week after what I assume was a long Blackhat/Defcon adventure for many of you. Now that you can safely use your mobile devices again, feel free to download my App from the Apple App Store. 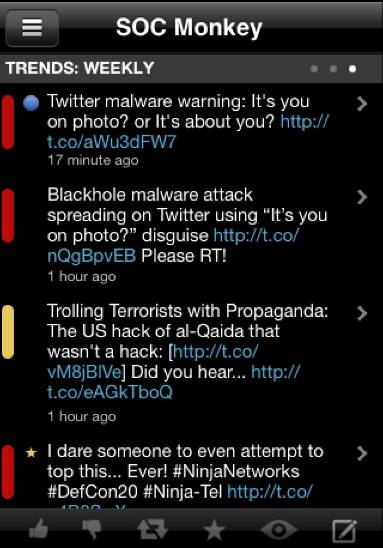 Twitter tops the charts this week, with a few stories about a new malware making the rounds: Twitter malware warning: It's you on photo? or It's about you? I actually received four of these tweets over the weekend and all of them, according to the article, would have redirected me to a Russian website hosting the code for the Blackhole exploit kit. I refrained from clicking any of them (as should you), because no matter how attractive a monkey I might be, and how much I enjoy a good photo of myself, i'm also a very skeptical one.

Next we've got an article from one of the best in the business, Brian Krebs, on the increasingly complex role malicious software is playing when it comes to espionage: Tagging and Tracking Espionage Botnets. The article includes an excellent breakdown of the current distribution and communication of Government focused spy software, as well as an interview with Joe Stewart of Dell SecureWorks. The article is a bit long, but as it's one of the top mentions on the app this week, it's proving to be a valuable read. Also, for those of you who were at Blackhat, Krebs himself might look familiar: Pen and sword equally mighty for science fiction's Stephenson.

Shifting from Blackhat to Defcon for a moment, this story: A Phone Network Just for Hackers, from the Wall Street Journal shows the high bar Defcon keeps setting each year for creative and innovative party invites and user badges. Ninja Networks set up their own private cell network at the conference, and handed out 650 Ninja-Tel phones as invitations. The phone idea was a throwback to the original hackers at Defcon - the phone phreakers of the past. There's also a great breakdown of the features and look of the phone itself on this YouTube video from technology site TheVerge. Even those these phones don't work outside of the conference space, I'm assuming quite a few people wanted to get their hands on this incredibly hackable phone. Did you get one?  Let us know what you've done or plan to do with it in the comments.

The pips also enjoyed these stories:

Infosecurity - All your speech belongs to Apple

Strike Back At Hackers? Get A Lawyer|DarkReading

Finally, I'll leave you with this bit of hilarity:Is a Computer Worm Causing Iranian Nuclear Facilities to Blast AC/DC's 'Thunderstruck' At Night? This just might be the perfect storm of all Information Security news articles.  First, it's on Gawker, which means we're sharing headline space with various Real Housewives of various US Cities. Second, the article itself is simply breathtaking. A virus that randomly starts blasting AC/DC at full volume might be the most amazing troll moment ever. I don't know what the average Nuclear scientist listens to on Pandora while he's working, but a sudden explosion of Thunderstruck probably turns some heads. I can't stop picturing people in full radiation suits, rocking some serious air guitar. I kind of hope one of the scientists is just pranking his stuffy colleagues, and we'll hear a retraction soon.  Either way? Best story of the week.

That's my review this week - we'll see you back here next time!