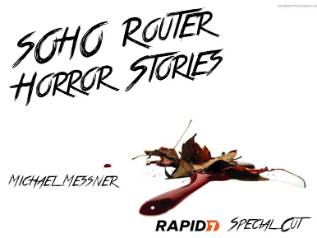 This Thursday, it's my distinct pleasure to host Mike @s3cur1ty_de Messner for a German-language webcast about SOHO router security. For those not familiar with him, Mike is the author of the most comprehensive German Metasploit book (published by dpunkt) and worked several years as a Metasploit trainer. His personal passion is poking holes into the kind of routers you (and your CEO) have at home. These types of systems are very widely used but are rarely patched - even though they have critical security issues. A few months ago, for example, 420,000 embedded devices were infected by a botnet called Carna and then used for a global Internet scanning project. While the so-called Internet Census was illegal but benign, it outlined the scale of the problem.

In this German-language webcast, Mike is sharing some of his research and is giving live demos of the Metasploit modules he's using. He's covering the following topics:

Reserve your seat in this German-language webcast now - space is limited!