I’m fresh out of re:invent’s keynote delivered by Amazon’s Andy Jassy and all I can say is WOW – what a great start to the conference.  A conference which incidentally is being attended by over 9000 people and with another 9000 watching online from over 57 countries.  Not surprising given AWS boasts customer numbers in the 100,000’s and according to Garnter’s latest IAAS magic quadrant has more than 5X the deployed infrastructure that the next 14 vendors combined. AWS is no longer simply the home of small start-ups running their business on the cloud – evident from a lot of what Jassy covered during the talk but also from the fact the attendees are 1/3 startups, 1/3 mid size orgs and 1/3 large enterprise.

To a packed audience, Jassy announced a number of new AWS services namely Amazon CloudTrail, App Stream and Workspaces.  He also covered everything from the full AWS stack, why people are moving to the cloud, some of their main concerns while doing so, Amazon’s pricing philosophy, benefits of moving, and some of the most prevalent uses of AWS.

Remember, we’re giving away prizes for joining the conversation!

Keep reading for some of the highlights:

Given we are interested in all things Logging, CloudTrail is music to our ears here at Logentries. AWS CloudTrail records the calls made to the AWS APIs using the AWS Management Console, the AWS Command Line Interface (CLI), your own applications, and third-party software and publishes the resulting log files to the Amazon S3 bucket of your choice. CloudTrail also supports forwarding these events to a logging service for deeper analysis. Typical use cases it will allow for, as cited by Amazon include compliance, resource tracking, troubleshooting and security analysis.  We however envisage a whole lot more – exciting news indeed!

Amazon Workspaces, a virtual desktop service on AWS, was also announced. The service allows access from any device, i.e. a laptop, smartphone or tablet and is synchronized so a customer gets persistent sessions. This allows a customer to end one session on a laptop and start another on a smartphone. Amazon also claims it is half the price of an on premise VDI … Amazon has now moved into the virtual desktop space… watch out VMWare!

Finally, Amazon AppStream is another new service – for mobile developers – allowing them to stream their games and apps from the cloud to any mobile device. Jassy described the issue that mobile developers regularly face where they often have to provide watered down user experiences to end users on less sophisticated or older devices.  According to Amazon, AppStream means an application is no longer constrained by the compute power, storage, or graphical rendering capabilities of the device.

Number 1 Priority when moving to the cloud – Security

According to Jassy, it’s no longer a question of ‘if’ organizations will move to the cloud, but a matter of ‘when’, and who will be first. And the number 1 priority that organizations  have when doing so is ‘Security’.

Naturally, AWS, is very security conscious and with strict security controls to its data centers, and has been designed and managed in alignment with regulations, standards, and best-practices. However, Jassy also spoke about the ‘network effect’ they see around security – essentially the more customers they get, the more input received on security capabilities, and ultimately the better the service gets for all. Expect to see a continued strong focus around security especially as AWS continue to go after more and more large enterprise customers.

A reminder of the benefits of the cloud

Jassy also announced new research from AWS showing a 32% reduction in total application downtime when people move to AWS and also reminded the room about why public cloud was such a good idea in the first place:

Why Organizations Move to the Cloud – Agility

While the number one question organizations have when moving to the cloud is security, the main reason FOR moving is agility. According to Jassy, you can’t afford to be slow – if you have an idea – you need servers quickly. You need to be able to experiment, fail and try again – I always liked how Samuel Becket put this: “Ever tried, ever failed, no matter. Try again, fail again, fail better.”

With AWS you can spin up as many instances as you need – in parallel – where traditionally you had to wait weeks. This helps create a culture of innovation, where you can experiment often and fail without risk, and pushes the entire organization to invent.

Jassy claims that as IT teams move to the cloud, they can concentrate more on adding value rather than racking and stacking – and more of the organization’s employees are free to think about new ideas to add value for customers.  The cloud essentially unleashes innovation up and down the organization.

As a message to anyone looking to AWS competitors Jassy also claimed that it’s not only compute and storage that provide agility but also services (e.g. DB services, big data analytics, queuing, email, workflow, monitoring, notifications…), with deep feature capabilities that allow for IT teams to better concentrate on their core business. Amazon don’t just build the service and sit still – in fact they have had 235 releases in relation to service enhancement this year to date (up from 61 in 2010, 82 in 2011, and 159 in 2012). Another key factor to being agile is the ability to scale globally which again is something that AWS have a big head start on.

AWS have made 38 cost reductions to date. Why? Customers never say… “I wish I could pay more”.

The AWS View of the Future

They say a picture paints a 1000 words – here’s one I captured on my iPhone from today: 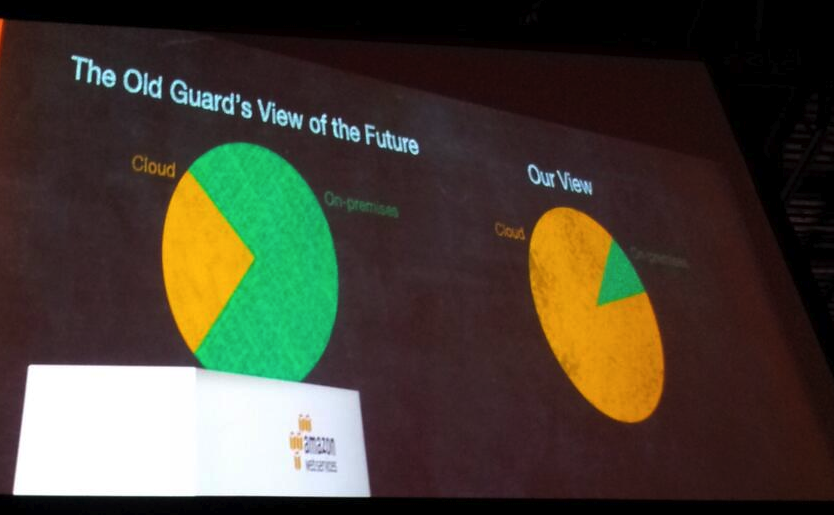 The AWS view is that its not a matter of IF, but WHEN organizations move to the cloud, and who will be first.

The parting message from Jassy was: “Go out an make it happen! AWS is going to be there every step of the way.”