This post is the seventh in a series, 12 Days of HaXmas, where we take a look at some of more notable advancements in the Metasploit Framework over the course of 2013. 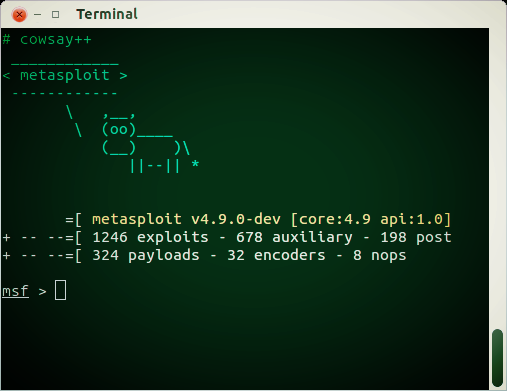 Today is the last day of the year, so there's no better time to get all weepy and sentimental about Metasploit development over a glass or four of champagne. I continue to be amazed, honored, and humbled by the amount of talent, skill, and brute force labor that goes in to keeping the Metasploit juggernaut rolling. With that, here's a quick stat check of what we've been up to.

We successfully published three major releases of Metasploit over the course of the year. April saw the release of Metasploit 4.6, which solidified full integration with the Kali Linux distribution as well as coverage for the OWASP 10 (2013 edition). In July, we released Metasploit 4.7, which introduced firewall egress testing and the automation oomph introduced by Metasploit Pro's MetaModules. In November, we published Metasploit 4.8 which boasts much better integration with Nexpose (Rapid7's delightful vulnerability scanner) for vulnerability validation capabilities.

Coincidentally, we ended the year in 2012 with exactly 2012 modules, across exploits, auxiliary and post modules, and payloads. We're ending 2013 with 2448 modules; that's just about 1.2 modules a day, every day. Major target categories that got attention were client-side browser and file format exploits (made easier now with the new BrowserExploitServer mixin), a bunch of new cross-platform web application server-side exploits, and of course the SAP modules that we've been yammering about since October. We also now have a huge trove of new SOHO router scanners and exploits, which are themselves a subset of our newly extended ARM and MIPS embedded device target support which Juan talked about yesterday.

OJ talked at length earlier this HaXmas about the Windows Meterpreter overhaul, but did you know that we've made significant advances with Java Meterpreter and landed the brand new and most excellent Python Meterpreter? Yep, and the Android Meterpreter is still coming along, too. It's been a great year all around for Metasploit payloads -- we have over 100 payloads new to 2013, so if you haven't peeked in on those lately, now's a fine time to catch up.

Finally, but most importantly, we've had some amazing support from the open source security community over 2013. We've had 204 committers over the year to Metasploit, more than any other year. The depth of talent, drive, and commitment among these committers really and truly does astound me every day. Y'all are the reason why Metasploit is where it is today.

The top 25 commiters (according to git logs) are:

Oh, that's some sweet, sweet SEO right there. Thanks to every single one of you for your contribution of your time and expertise to the Framework!

Oh, and hey, we released the final Metasploit update for the year just now, too -- 13 new modules this week, including the veristle intelligence-gathering DNS scraper module from zeknox and an exploit for Red Hat CloudForms from Ramon. Thanks guys!