The State of Logging on Docker

Last week I wrote a post on how to log from Docker containers. In short I was playing around with Docker and wanted to try to figure out how to get some log data from my containers into my Logentries account. I tried the following approaches:

Interestingly I got some great feedback from the Docker community on this post. Mostly asking why I didn’t run rsyslog outside the container on the host. In order to do this you can bind a volume to the container and then write logs from your process to that mount point. 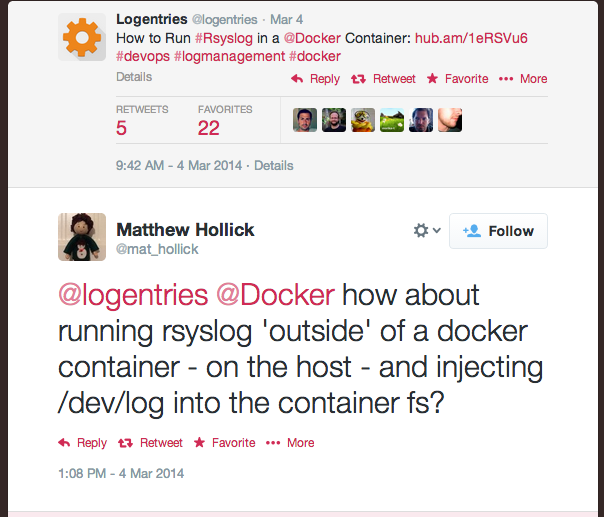 This approach means I do not need to run any other processes inside my container and can capture logs from all containers via a single rsyslog daemon. Binding a volume to the container is described in more detail in a nice post on Tim Gross’ blog.  Tim does call out a security concern with this approach however – “attaching a volume from the host slightly weakens the LXC security advantages. The contained process can now write outside its container and this is a potential attack vector if the contained process is compromised.”

Although, according to the baseimage-docker guys, “there is no technical reason why you should limit yourself to one process – it only makes things harder for you and breaks all kinds of essential system functionality, e.g. syslog.” In fact baseimage-docker ships with syslog-ng preinstalled so that important system messages do not get lost. I have not had the chance to hook this up to Logentries yet, but intend to soon so keep an eye out here!

After looking around further I also found that another approach is to run a log collector inside a container on your host machine and expose a named pipe as a volume that other containers on that host can mount and write to. There’s a great post on HNWatcher on how to run a log-stash forwarder in a container, which will allow you to collect and forward logs from any other container on the same host.

So in summary if you are trying to get at your docker log data right now you have a number of options:

All that being said, keep your eyes peeled. It looks like there is more coming down the track from the Docker developer community – check out some interesting discussions, on how ideas around improving access to container logs are developing on the docker-dev mailing list.