This whole week in Vegas it seems everywhere you look there's a security convention - while Black Hat might be the biggest, both Def Con and BsidesLV are overlapping a bit during this busy week. I visited BsidesLV yesterday, as well as its con-within-a-con PasswordsCon, up the Strip at the Tuscany suites. The panels at Bsides spanned a really wide range of topics, from detailed how-to-hack panels to more social programs, like setting up a 501(c)(3) non-profit.  (You can see the schedule here: http://www.bsideslv.org/schedule/.) 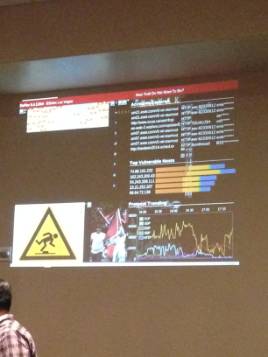 A big draw for a lot of people was socializing in the chillout room, keeping an eye on the Wall of Sheep and the Capture the Flag scoreboard, or spending time in the Lockpick village that FALE hosted. I also ended up spending time at PasswordsCon (aka #Passwords14) panels, which had a lot of fascinating tactical content. There's no question why passwords are top of mind for a lot of security practitioners nowadays--the oft-quoted Verizon DBIR statistic about stolen credentials being the #1 attack vector in 2013 for one thing. The conversation at Passwords14 was led by top researchers and practitioners in the field, many of whom presented original research and gave a lot for us all to think about on the known issues with password efficacy, the many different authentication methods out there, and how policies and compliance mandates actually affect security in the real world.

One of the sessions I attended was by Bruce Marshall: "How Forced Password Expiration Affects Password Choice." He started by asking attendees if people had a strong opinion on password expiration policies, and most of the room already did. There are a lot of anecdotes about how password policies lead to sub-optimal user behaviors (writing down passwords on post-its, using simple password iterations e.g. password1, password2...) but Bruce actually presented researched statistics to back up what a lot of us already suspected:

So what to do about it?

Bruce noted that for a small organization, a password expiration policy is a good "gap filler," meaning it's an easily-implemented and enabled control. And honestly, it can be better than nothing.

But to some degree, Bruce says, the practice is so entrenched and has gone unquestioned for so long that it has become a de-facto best practice, but it's time to re-examine the practice and try new methods. He notes that many organizations are making changes: Some are making the frequency of password changes much longer (a year or more) but requiring heftier, longer passwords.

Bruce also noted that better intrusion prevention and more robust profiles of user behavior will go a long way in making sure the person logging in to an account actually is who they say they are.

That's all from me for now - I'm off to BlackHat this morning. I'll be tweeting from many of the sessions today from my handle @mvarmazis – and if you see me with the bright red backpack around the show floor, say hello!