This post is the eighth in a series, 12 Days of HaXmas__, where we take a look at some of more notable advancements and events in the Metasploit Framework over the course of 2014.

A week or two back, Mercurial inventor Matt Mackall found what ended up being filed as CVE-2014-9390.  While the folks behind CVE are still publishing the final details, Git clients (before versions 1.8.5.6, 1.9.5, 2.0.5, 2.1.4 and 2.2.1) and Mercurial clients (before version 3.2.3) contained three vulnerabilities that allowed malicious Git or Mercurial repositories to execute arbitrary code on vulnerable clients under certain circumstances.

To understand these vulnerabilities and their impact, you must first understand a few basic things about Git and Mercurial clients.  Under the hood, a Git or Mercurial repository on disk is really just a directory.  In this directory is another specially named directory (.git for Git, .hg for Mercurial) that contains all of the configuration files and metadata that makes up the repository.  Everything else outside of this special directory is just a pile of files and directories, often called the working directory, written to disk based on the previous mentioned metadata.  So, in a way, if you had a Git repository called Test, Test/.hg is the repository and everything else under the Test directory is simply a working copy of of the files contained in the repository at a particular point in time.  An nearly identical concept also exists in Mercurial.

Here is a quick example of a simple Git repository that contains has no files committed to it.  As you can see, even this empty repository has a fair amount of metadata and a number of configuration files:

If you then add a single file to it called test.txt, you can see how the directory starts to change as the raw objects are added to the .git/objects directory:

This is where the trouble begins.  Both Git and Mercurial clients have had code for a long time that ensures that no commits are made to anything in the .git or .hg directories.  Because these directories control client side behavior of a Git or Mercurial repository, if they were not protected, a Git or Mercurial server could potentially manipulate the contents of certain sensitive files in the repository that could cause unexpected behavior when a client performs certain operations on the repository.

Unfortunately these sensitive directories were not properly protected in all cases.  Specifically:

Basic exploitation of the first vulnerability is fairly simple to do with basic Git commands as I described in #4435, and the commits that fix the second and third vulnerabilities show simple examples of how to exploit it.

But basic exploitation is boring so in #4440 I've spiced things up a bit.  As currently written, this module exploits the first of these three vulnerabilities by launching an HTTP server designed to simulate a Git repository accessed over HTTP, which is one of the most common ways to interact with Git.  Upon cloning this repository, vulnerable clients will be convinced to overwrite Git hooks, which are shell scripts that get executed when certain operations happen (committing, updating, checkout, etc).  By default, this module overwrites the .git/hooks/post-checkout script which is executed upon completion of a checkout, which conveniently happens at clone time so the simple act of cloning a repository can allow arbitrary code execution on the Git client.  It goes a little bit further and provides some simplistic HTML in the hopes of luring in potentially vulnerable clients: 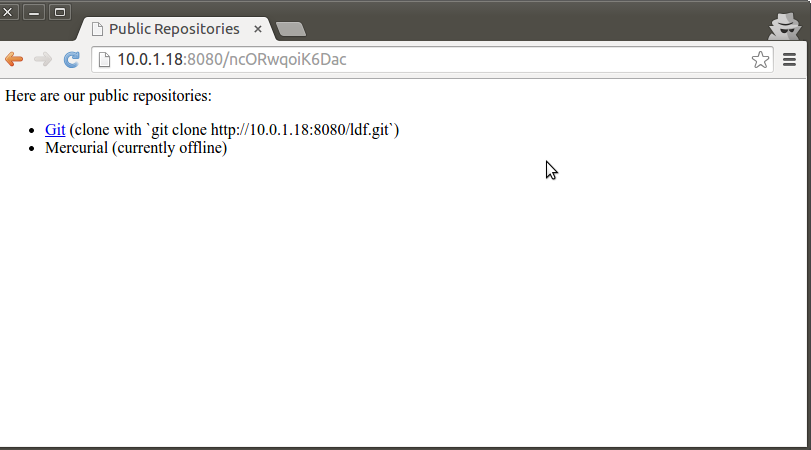 And, if you clone it, it only looks mildly suspicious:

The module has the beginnings of support for the second and third vulnerabilities, so this particular #haxmas gift may need some work by you, the Metasploit community.