Ubuntu &amp; Logs at the Core of IoT

I always think of Internet of Things as a world of devices with (wireless) internet connections all communicating with each other. All such devices spew out logs (as all software and hardware components do) as they run – akin to exhaust fumes from your automobile (before it was an electric one of course…). However the log data is not simply waste, as is the case of your car fumes, and in fact can act as both telemetry data for monitoring purposes as well as an intermediate language for intercommunication between devices. Thus, with the Internet of Things we ultimately get the ‘Internet of Logs’… 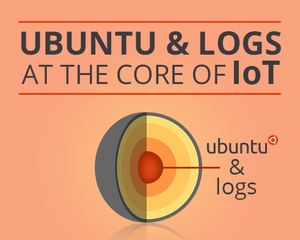 An open question when it comes to IoT is: who will become the dominant OS platform for such devices? Ubuntu has recently raised their hand with the arrival of Ubuntu core for IoT devices. Ubuntu Core is a slimmed down version of your regular Ubuntu with application isolation and ‘snappy’ transactional updates – it is available on all your popular cloud platforms including AWS, Azure and Google Compute Engine and is even supported by the new Raspberry Pi2 announced on Monday.

I personally made the switch to Ubuntu in the mid-nineties as with many others upon the arrival of windows vista… 🙂  Since then Ubuntu has become one of the most popular client desktops amongst linux users. When it comes to the cloud Ubuntu is even more dominant claiming about a 70% footprint in any public cloud. It will be interesting to see how the IoT battle plays out – but with Ubuntu already being 6 times more popular than the next OS on container platforms like Docker, you would certainly not bet against them when it comes to powering the next generation of IoT devices.

At Logentries we are long time Ubuntu users, both as a client desktop as well as within our development and production environments. In fact today we are excited to release our first Linux Ubuntu Community Pack to give you immediate visibility into your Ubuntu logs when using Logentries. The pack contains out-of-the-box dashboards, tags for important events and alert notifications providing insight into user login activity, root access patterns, as well as common error and warnings. Take a look and let us know what you think!