The Hidden Costs of Open Source 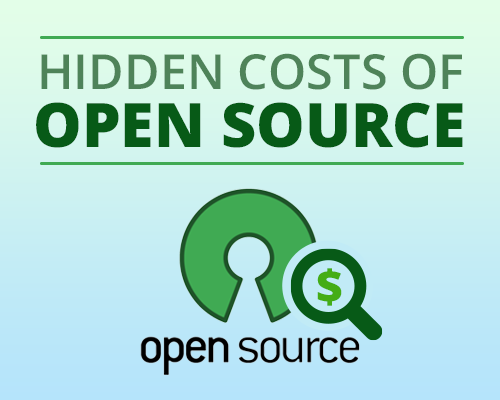 Open source projects allow us to adopt technology without a lot of hoops.  We get to leverage a strong community base, and potentially support the growing group committed to building even better solutions, which can have the added benefit of notoriety. But there is one problem – open source is not as it seems. While it might appear free to begin with, it does come with cost down the road in real dollars, pain, risk, and time.

Many companies are open-source first. Where every new challenge is faced with the question, “is there an open source tool to help us?” This is driven by the notion of free support for the dev community and the interest in speed of adoption. And often, their love is rooted in the original spirit of open source which is not the dominant driving force today.

There are three types of open-source technologies:

The constant across all of these is the unknown and instability of the solution.

The reality is, to really dive into an open-source project you will likely have to settle with a commercial interest one. You probably will be blindsided at some point by the need to “upgrade” in addition to your overall, sometimes ignored, costs. These include adaptation of the tool for you, and security planning. Often these hidden costs are higher than if a commercial solution was purchased. And if it is a cloud solution, the cost difference could be equivalent to the days of licensing enterprise software (CAPEX) compared to cloud competitors (OPEX) which can be a savings many times over.

Open source is a powerful tool, and no comprehensive development environment will be without some valuable open source components. The key is knowing that there often is a motive, and even when there isn’t, there will always be a trade off and some hidden costs. The idea is that you are deliberate about adopting open source, and not adopting just because it is easy. And you should always compare the open source tool with a commercial pay for alternative, in order to better decide and weigh the costs. You might be surprised to find that the paid offering is a clear winner.