The Power of IOT with a Query Language 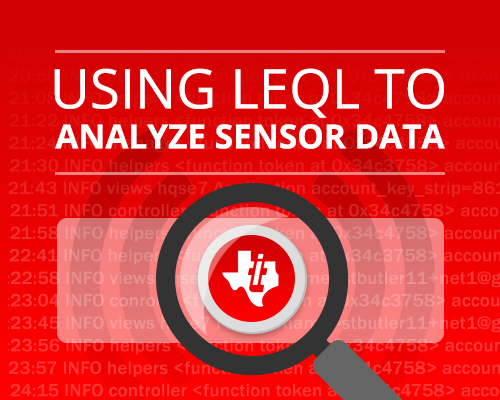 This is one of a series of IoT blogs that show how easy it can be to integrate a range of real sensor devices with Logentries. The focus of this blog is to show how the Logentries Query Language (LEQL) can be used to search and analyze that data. A separate blog will also show the usefulness of the alerting functionality in Logentries, where labels can be set that will display with matching events/data, alerts can be sent to a range of destinations (including webhooks) and anomalies or inactivity can be detected.

The volume and variety of sensor data, usually unstructured or semi-structured makes it a challenge to collect and store the data, but also to analyze such an amount of data. Viewing the collected sensor data at a point in time is important, but the value is increased if it can be put in context over time periods from a single source or across multiple sources, especially if easy to use tools and languages are made available to allow data scientists and domain experts to work with the data from sensors.

This blog will show how to use LEQL from the Search bar in the UI, but the same functionality will be available over our REST Query API, including language features such as groupby designed for heavy hitters, e.g. the sensors sending the highest readings, to be selected from a large data set.

The SensorTag data is sent as a message like the following:

Note that keys are extracted from the logs, e.g. payload.object, and will appear as suggestions as you construct the where clause of your LEQL request.

More detailed information on LEQL can be found at https://logentries.com/doc/search/, but for the purposes of this blog, it can be considered as a query language consisting of:

The LEQL request will also contain:

The SensorTag supplies data from a range of sensors, but where allows us to create a simple request to query only one of the sensors, with a greater than condition to make it more specific, as below: 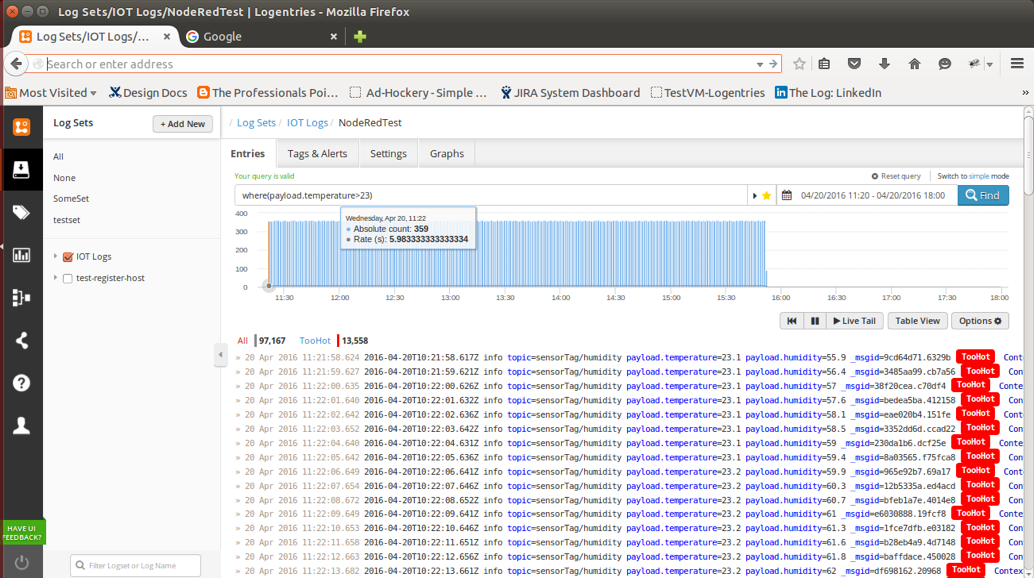 Note that the displayed events also have a label called “Too Hot” which was also added for all log events > 23. 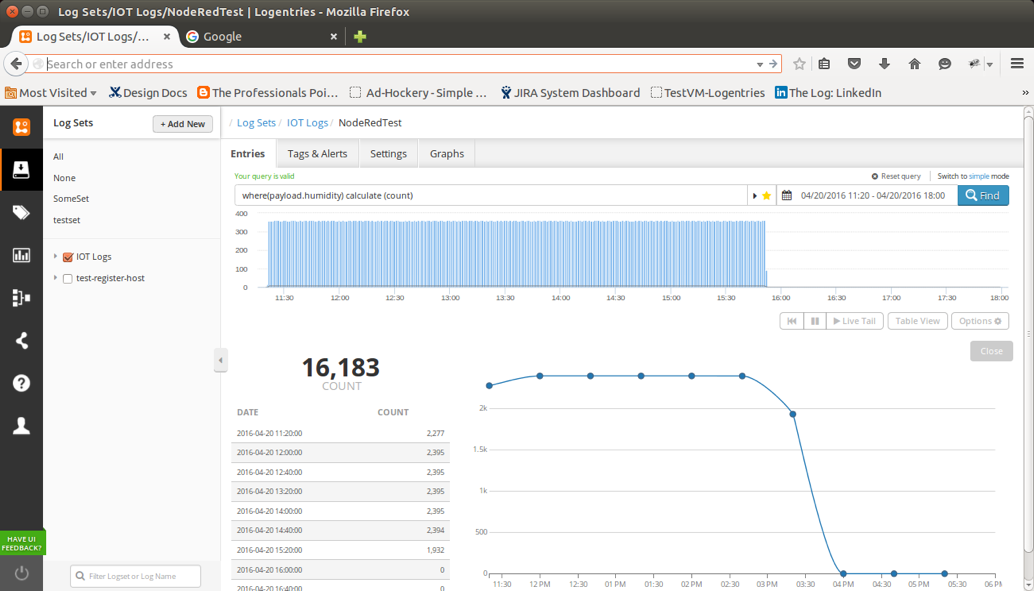 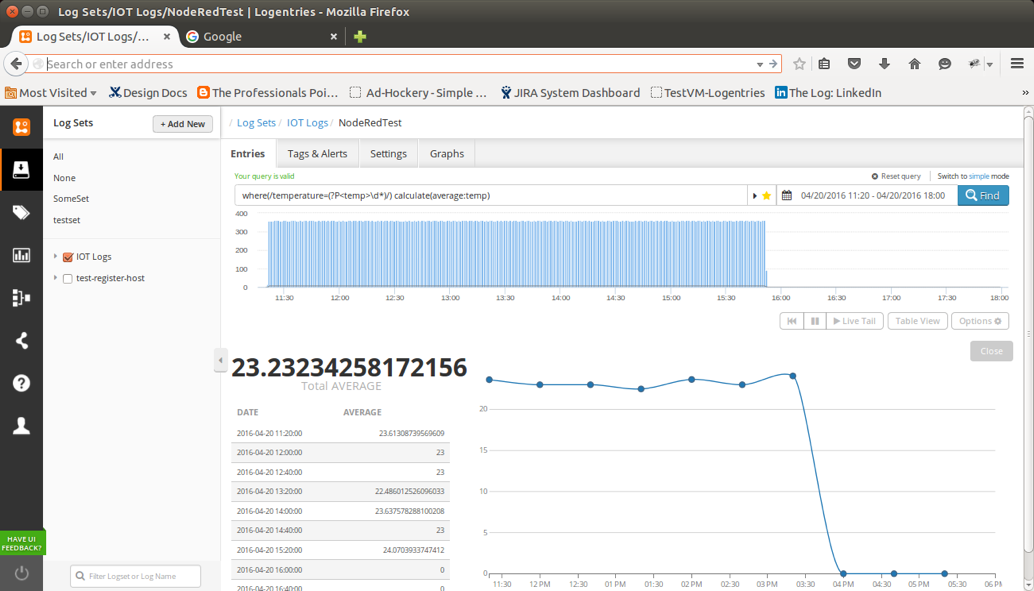 Having reviewed the average temperature readings, I now want to look at temperatures above 22 and group particular temperature values to see which occurs most frequently, for which I use groupby 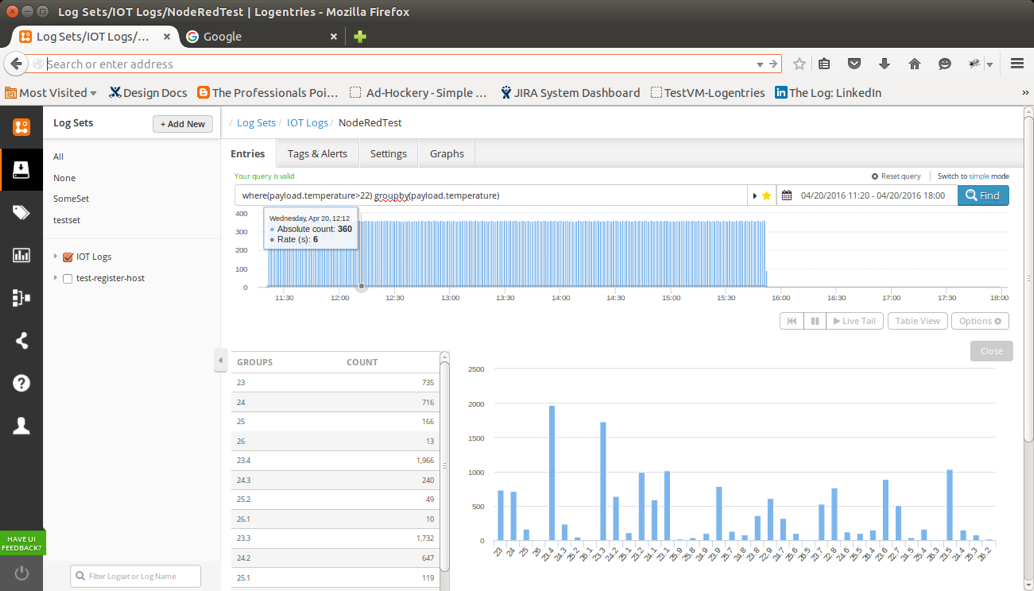 But I decide that is not a useful grouping, so I use the same regular expression as above and groupby to get a count in a set of temperature ranges/groups, using the request below: 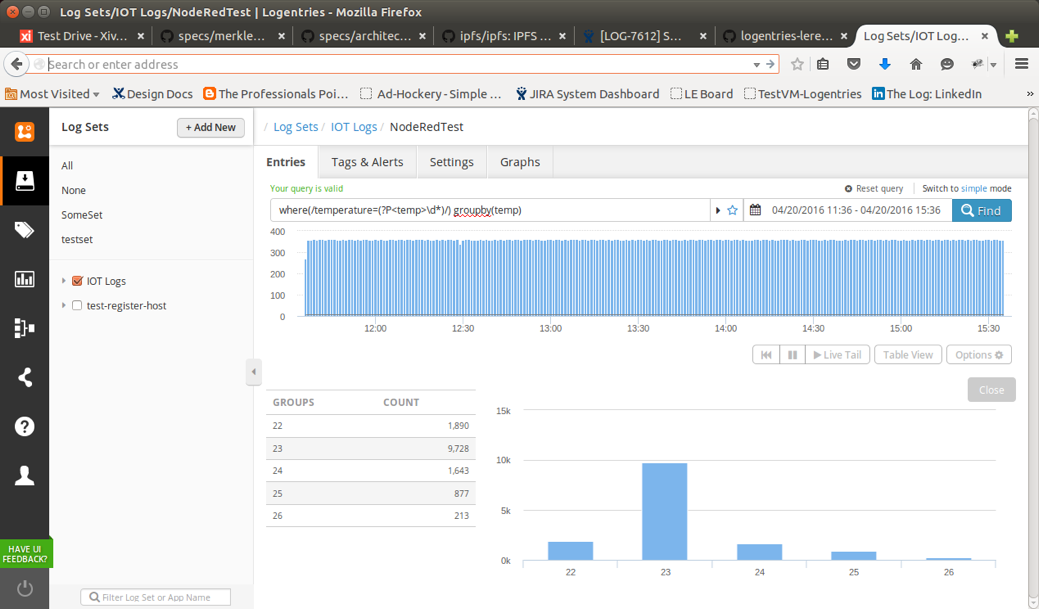 Another example of groupby would be where I want to group the number of requests by the type of sensor – I use a regular expression to extract the type that follows “sensorTag/” into type and do a groupby on type, which shows that during the period under test, all the sensors were reporting at the same frequency, which can then be adjusted as appropriate for each sensor. 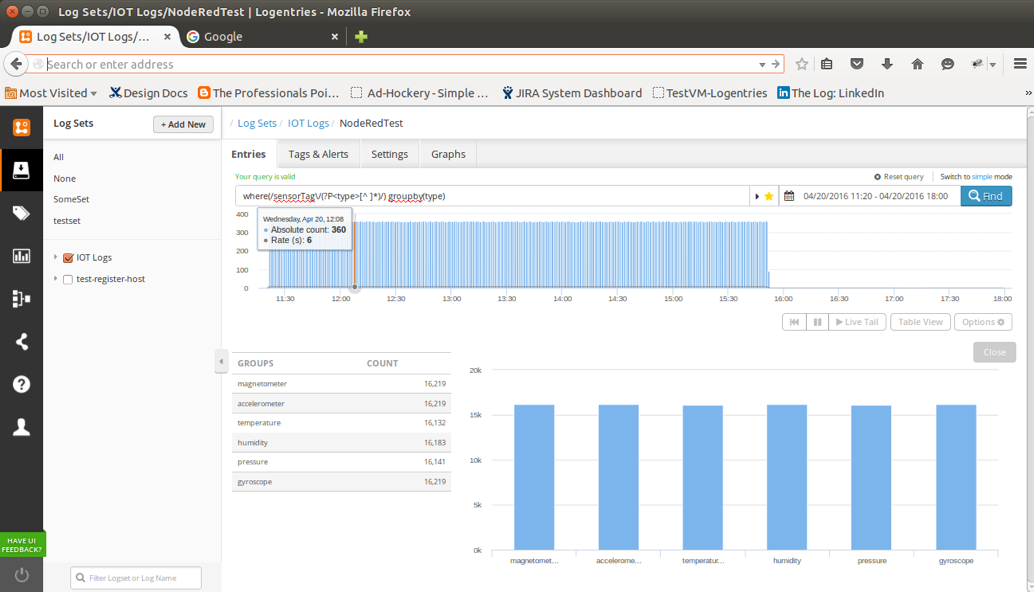 While the groupby has shown  that there are no real outliers outside the range 22-26. I can also use the LEQL percentile function to explicitly exclude outliers from the search functions in time ranges, by selecting a 99th percentile search for payload.temperature=value key value pair, as below: 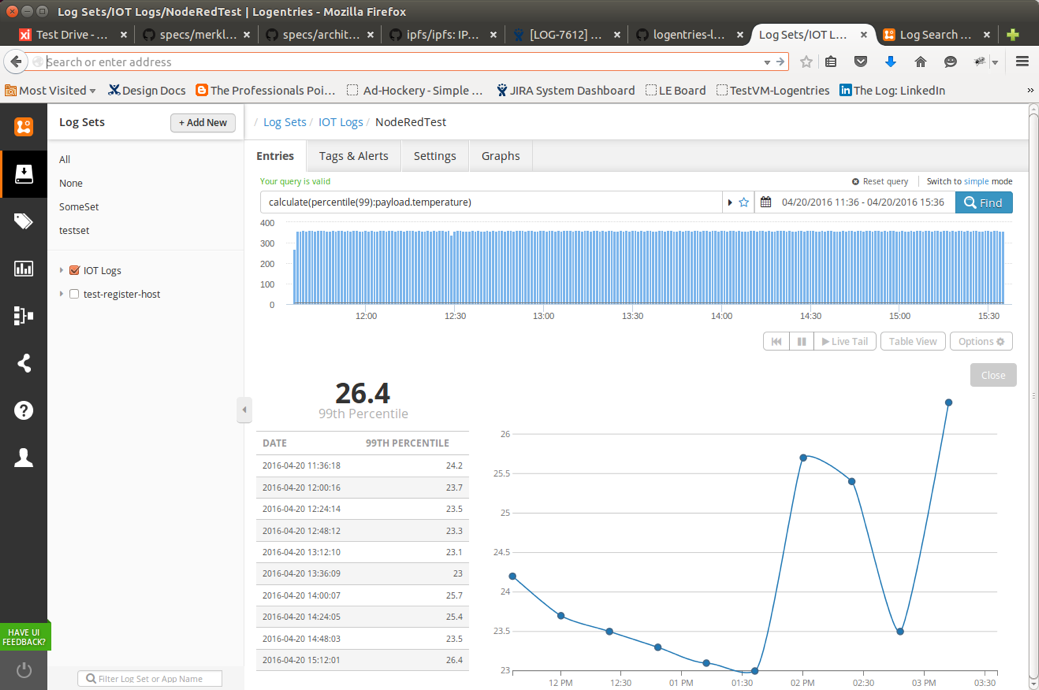 The LEQL functions we have seen until now are useful for periodic/regular sensors like temperature where the readings are less likely to have sudden abrupt changes in value. An accelerometer may, however, undergo rapid changes in short time periods and we may want to isolate those times for further analysis. This is where timeslice comes in. The following request breaks the count for the overall from/to period into 5 time slices: 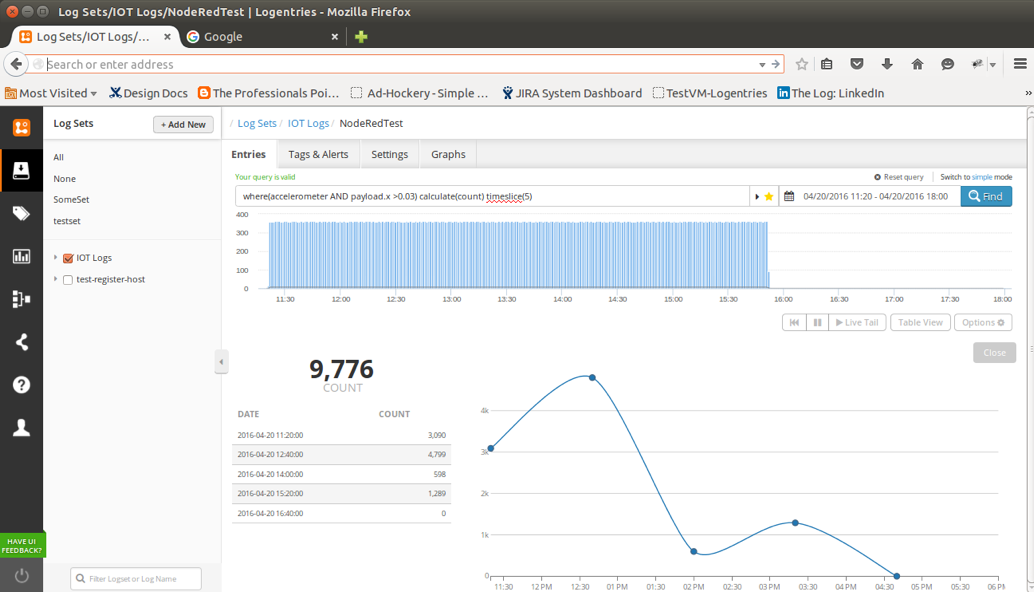 This indicates that there were periods with rapid changes (I shook the SensorTag device  🙂 ). I can narrow those ranges down with more timeslices and I can then do more specific “where” searches in the time ranges of interest: 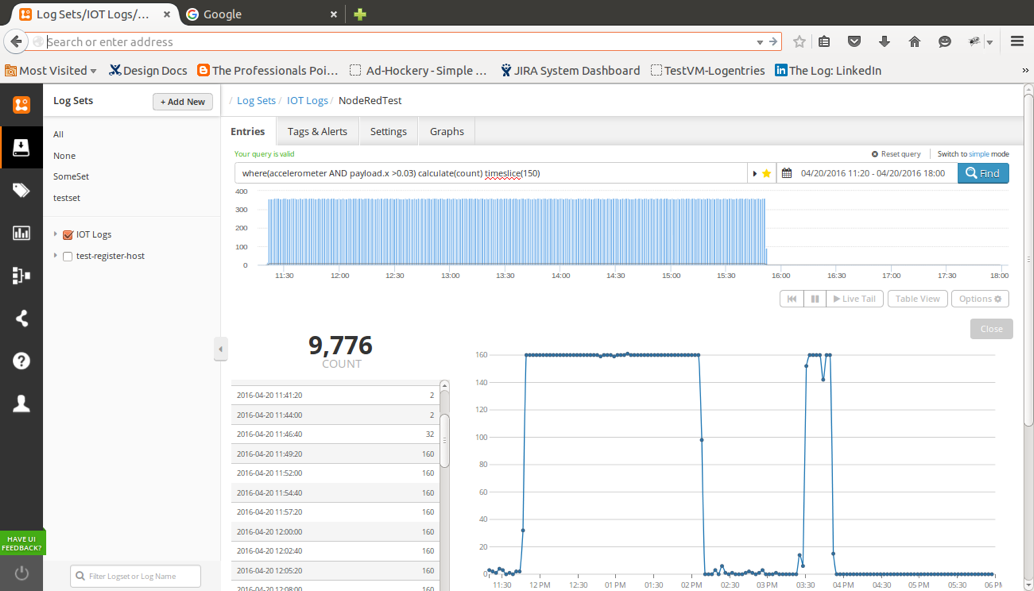 This Blog has shown how easy it is to search and analyze real sensor data sent to Logentries using LEQL – these same queries can be used in dashboards in the UI that update the data at regular periods. Future blogs will show how to generate alerts from this sensor data, including inactivity and anomaly alerts and also provide examples of how to send data to Logentries from more devices.