The UNITED Security Summit will kick off this year with an opening keynote from four-star General Stan McChrystal, a renowned expert on leadership, vision, and teamwork. 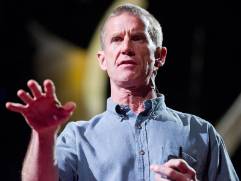 Anyone familiar with General McChrystal knows what an amazing, unique experience it is to hear him speak. Just check out his TED talk, “Listen, learn…then lead."

A one-of-a-kind commander and bestselling author, General McChrystal is widely praised for creating a revolution in warfare that fused intelligence and operations. Wired Magazine called him “a warrior and visionary who turned a bulky bureaucracy into a fast-moving force that helped wipe out Al-Qaeda in Iraq and is credited with turning the tide of that war as well as the one in Afghanistan.”

With field-tested leadership lessons that stress a uniquely inclusive model – one focused on building teams capable of relentlessly pursuing results – General McChrystal fits in perfectly with this year's UNITED theme: Empowered. His keynote is sure to be one of the highlights of the event! Register now, and show up early to snag a seat.