Today, I'm happy to announce the latest research paper from Rapid7, National Exposure Index: Inferring Internet Security Posture by Country through Port Scanning, by Bob Rudis, Jon Hart, and me, Tod Beardsley. This research takes a look at one of the most foundational components of the internet: the millions and millions of individual services that live on the public IP network. 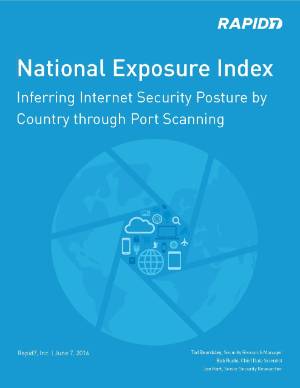 When people think about "the internet," they tend to think only of the one or two protocols that the World Wide Web runs on, HTTP and HTTPS. Of course, there are loads of other services, but which are actually in use, and at what rate? How much telnet, SSH, FTP, SMTP, or any of the other protocols that run on TCP/IP is actually in use today, where are they all located, and how much of it is inherently insecure due to running over non-encrypted, cleartext channels?

While projects like CAIDA and Shodan perform ongoing telemetry that covers important aspects of the internet, we here at Rapid7 are unaware of any ongoing effort to gauge the general deployment of services on public networks. So, we built our own, using Project Sonar, and we have the tooling now to not only answer these fundamental questions about the nature of the internet and come up with more precise questions for specific lines of inquiry.

Can you name the top ten TCP protocols offered on the internet? You probably can guess the top two, but did you know that #7 is telnet? Yep, there are 15 million good old, reliable, usually unencrypted telnet out there, offering shells to anyone who cares to peek in on the cleartext password as it's being used.

We found some weird things on the national level, too. For instance, about 75% of the servers offering SMB/CIFS services - a (usually) Microsoft service for file sharing and remote administration for Windows machines -  reside in just six countries: the United States, China, Hong Kong, Belgium, Australia and Poland.

It's facts like these that made us realize that we have a fundamental gap in our awareness of the services deployed on the public side of firewalls the world over. This gap, in turn, makes it hard to truly understand what the internet is. So, the paper and the associated data we collected (and will continue to collect) can help us all get an understanding of what makes up one of the most significant technologies in use on Planet Earth.

So, you can score a copy of the paper, full of exciting graphs (and absolutely zero pie charts!) here. Or, if you're of a mind to dig into the data behind those graphs, you can score the summary data here and let us know what is lurking in there that you found surprising, shocking, or sobering.