For the past several years, Rapid7's Project Sonar has been performing studies that explore the exposure of the NetBIOS name service on the public IPv4 Internet.  This post serves to describe the particulars behind the study and provide tools and data for future research in this area.

Originally conceived in the early 1980s, NetBIOS is a collection of services that allows applications running on different nodes to communicate over a network.  Over time, NetBIOS was adapted to operate on various network types including IBM's PC Network, token ring, Microsoft's MS-Net, Novell NetWare IPX/SPX, and ultimately TCP/IP.

For purposes of this document, we will be discussing NetBIOS over TCP/IP (NBT), documented in RFC 1001 and RFC 1002.

NBT is comprised of three services:

The UDP variant of the NetBIOS over TCP/IP Name service on 137/UDP, NBNS, sometimes referred to as WINS (Windows Internet Name Service), is the focus of this study.  NBNS provides services related to NetBIOS names for NetBIOS-enabled nodes and applications.  The core functionality of NBNS includes name querying and registration capabilities and is similar in functionality and on-the-wire format to DNS but with several NetBIOS/NBNS specific details.

Although NetBIOS (and, in turn, NBNS) are predominantly spoken by Microsoft Windows systems, it is also very common to find this service active on OS X systems (netbiosd and/or Samba), Linux/UNIX systems (Samba) and all manner of printers, scanners, multi-function devices, storage devices, etc.  Fire up wireshark or tcpdump on nearly any network that contains or regularly services Windows systems and you will almost certainly see NBNS traffic everywhere: 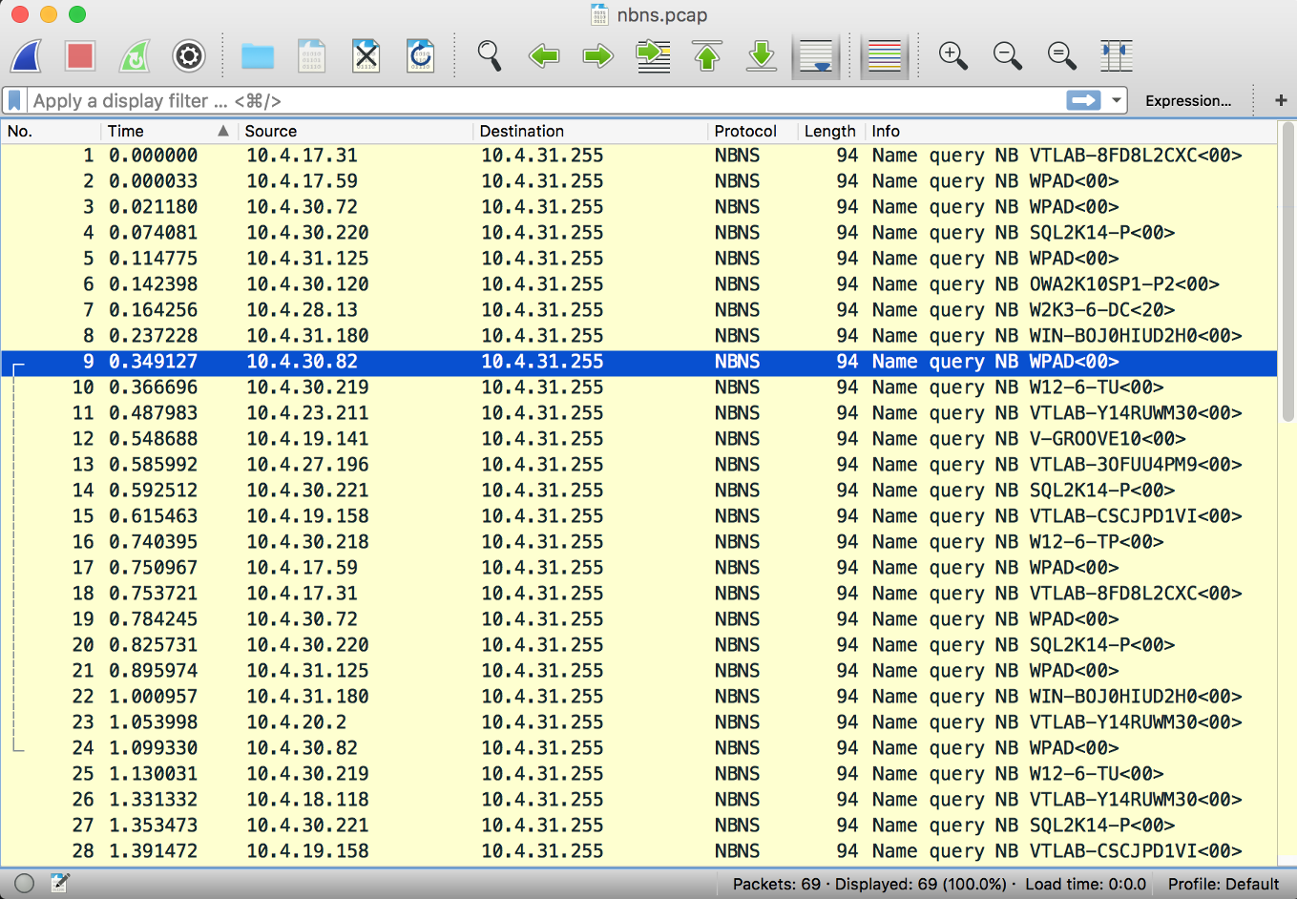 The history of security issues with NBNS reads much like that of DNS.  Unauthenticated and communicated over a connectionless medium, some attacks against NBNS include:

While not exhaustive, some notable security issues relating to NBNS include:

Project Sonar's study of NBNS on 137/UDP has been running for a little over two years as of the publication of this document.  For the first year the study ran once per week, but shortly thereafter it was changed to run once per month along with the other UDP studies in an effort to reduce the signal to noise ratio.

The study uses a single, static, 50-byte NetBIOS "node status request" (NBSTAT) probe with a wildcard (*) scope that will return all configured names for the target NetBIOS-enabled node.  A name in this case is in reference to a particular capability a NetBIOS-enabled node has -- for example, this could (and often does) include the configured host name of the system, the workgroup/domain that it belongs to, and more.  In some cases, the presence of a particular type of name can be an indicator of the types of services a node provides.  For a more complete list of the types of names that can be seen in NBNS, see Microsoft's documentation on NetBIOS suffixes. 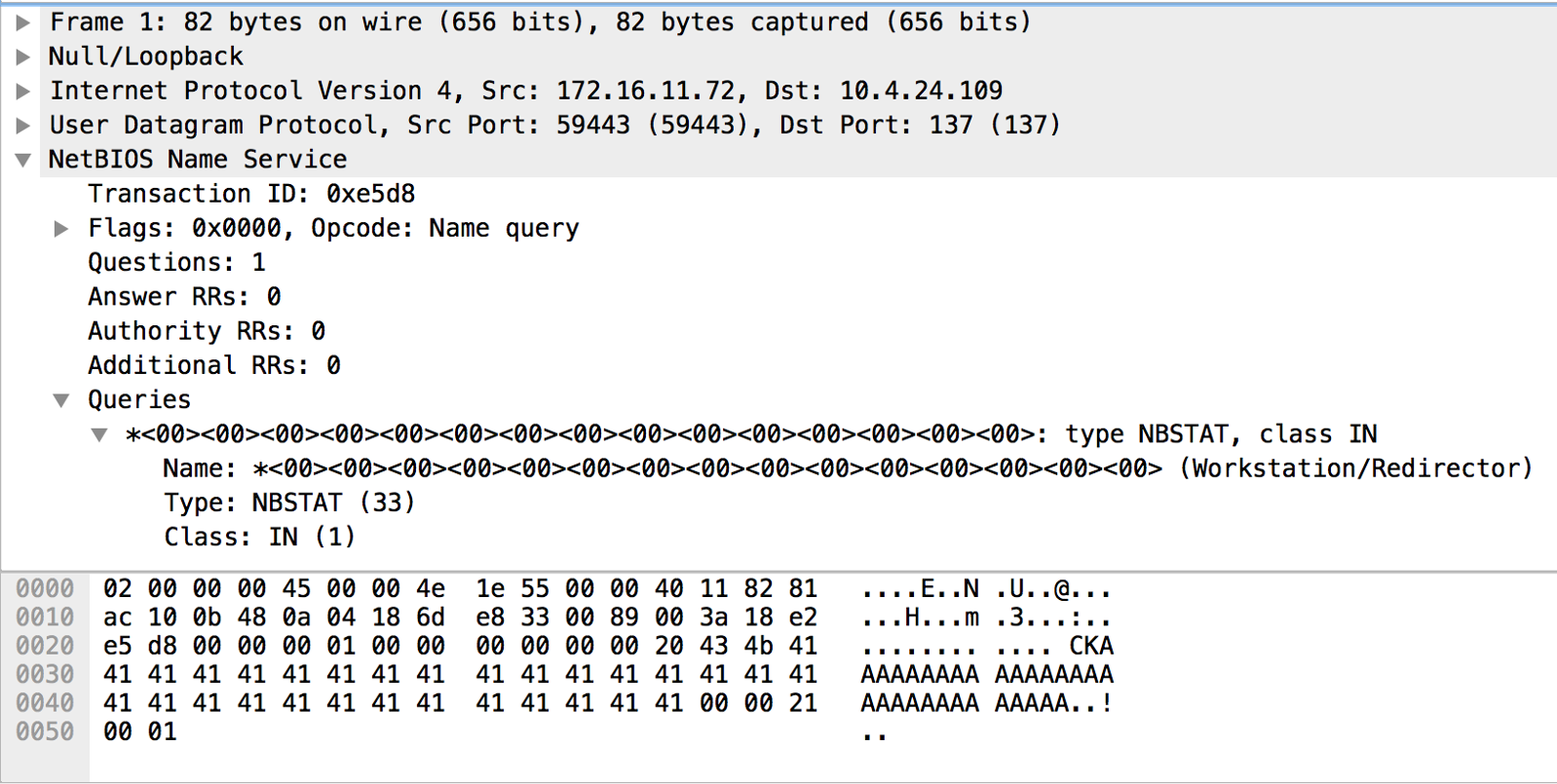 This probe is sent to all public IPv4 addresses, excluding any networks that have requested removal from Sonar's studies, leaving ~3.6b possible target addresses for Sonar.  All responses, NBNS or otherwise, are saved.  Responses that appear to be legitimate NBNS responses are decoded for further analysis.

An example response from a Windows 2012 system: 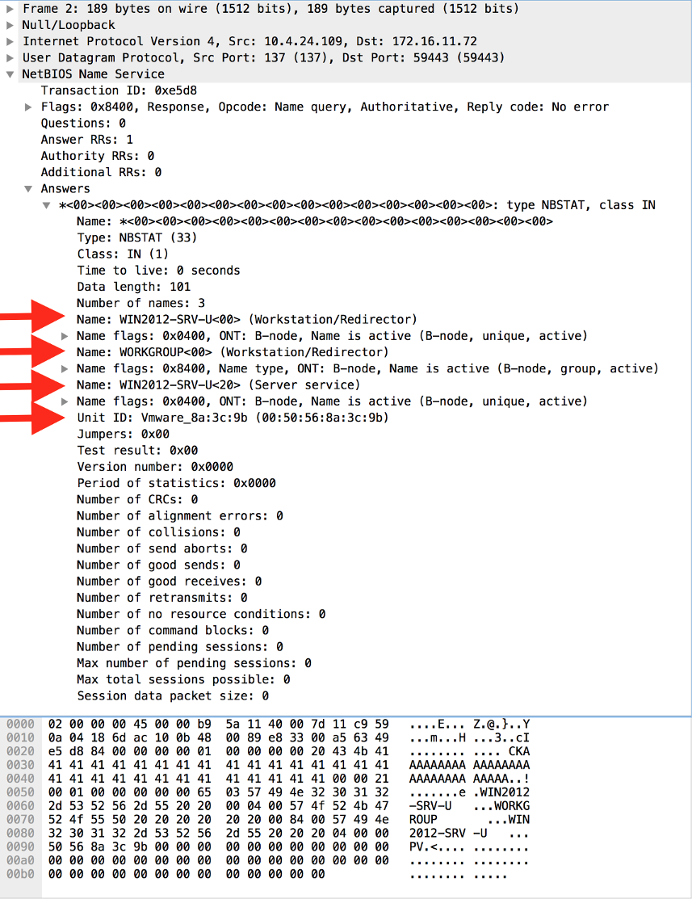 As a bonus for reconnaissance efforts, RFC 1002 also describes a field included at the end of the node status response that includes statistics about the NetBIOS service on the target node, and one field within here, the "Unit ID", frequently contains the ethernet or other MAC address.

NetBIOS, and in particular NBNS, falls into the same bucket that many other services fall into -- they have no sufficiently valid business reason for being exposed live on the public Internet.  Lacking authentication and riding on top of a connectionless protocol, NBNS has a history of vulnerabilities and effective attacks that can put systems and networks exposing/using this service at risk.  Depending on your level of paranoia, the information disclosed by a listening NBNS endpoint may also constitute a risk.

These reasons, combined with a simple, non-intrusive way of identifying NBNS endpoints on the public IPv4 Internet is why Rapid7's Project Sonar decided to undertake this study.

As part of Rapid7's Project Sonar, all data collected by this NBNS study is shared with the larger security community thanks to scans.io.  The past two years worth of the NBNS study's data can be found here with the -netbios-137.csv.gz  suffix.  The data is stored as GZIP-compressed CSV, each row of the CSV containing the metadata for the response elicited by the NBNS probe -- timestamp, source and destination IPv4 address, port, IP ID, TTL and, most importantly, the NBNS response (hex encoded).

There are numerous ways one could start analyzing this data, but internally we do much of our first-pass analysis using GNU parallel and Rapid7's dap.  Below is an example command you could run to start your own analysis of this data.  It utilizes dap to parse the CSV, decode the NBNS response and return the data in a more friendly JSON format:

As an example of some of the output you might get from this, anonymized for now:

There are also several Metasploit modules for exploring/exploiting NBNS in various ways:

For a protocol that has been around for over 30 years and has had its fair share of research done against it, one might think that there is no more to be discovered, but the discovery of two high profile vulnerabilities in NBNS this year (HotPotato and BadTunnel) shows that there is absolutely more to be had.

If you are curious about NBNS and interested in exploring more, use the data, tools and knowledge provided above.  We'd love to hear your ideas or discoveries either here in the comments or by emailing research@rapid7.com.