When cybersecurity researchers find a bug in product software, what's the best way for the researchers to disclose the bug to the maker of that software? How should the software vendor receive and respond to researchers' disclosure? Questions like these are becoming increasingly important as more software-enabled goods - and the cybersecurity vulnerabilities they carry - enter the marketplace. But more data is needed on how these issues are being dealt with in practice.

Today we helped publish a research report [PDF] that investigates attitudes and approaches to vulnerability disclosure and handling. The report is the result of two surveys – one for security researchers, and one for technology providers and operators – launched as part of a National Telecommunications and Information Administration (NTIA) “multistakeholder process” on vulnerability disclosure. The process split into three working groups: one focused on building norms/best practices for multi-party complex disclosure scenarios; one focused on building best practices and guidance for disclosure relating to “cyber safety” issues, and one focused on driving awareness and adoption of vulnerability disclosure and handling best practices. It is this last group, the “Awareness and Adoption Working Group” that devised and issued the surveys in order to understand what researchers and technology providers are doing on this topic today, and why. Rapid7 - along with several other companies, organizations, and individuals - participated in the project (in full disclosure, I am co-chair of the working group) as part of our ongoing focus on supporting security research and promoting collaboration between the security community and technology manufacturers.

The surveys, issued in April, investigated the reality around awareness and adoption of vulnerability disclosure best practices. I blogged at the time about why the surveys were important: in a nutshell, while the topic of vulnerability disclosure is not new, adoption of recommended practices is still seen as relatively low. The relationship between researchers and technology providers/operators is often characterized as adversarial, with friction arising from a lack of mutual understanding. The surveys were designed to uncover whether these perceptions are exaggerated, outdated, or truly indicative of what's really happening. In the latter instance, we wanted to understand the needs or concerns driving behavior.

The survey questions focused on past or current behavior for reporting or responding to cybersecurity vulnerabilities, and processes that worked or could be improved. One quick note – our research efforts were somewhat imperfect because, as my data scientist friend Bob Rudis is fond of telling me, we effectively surveyed the internet (sorry Bob!). This was really the only pragmatic option open to us; however, it did result in a certain amount of selection bias in who took the surveys. We made a great deal of effort to promote the surveys as far and wide as possible, particularly through vertical sector alliances and information sharing groups, but we expect respondents have likely dealt with vulnerability disclosure in some way in the past. Nonetheless, we believe the data is valuable, and we're pleased with the number and quality of responses.

There were 285 responses to the vendor survey and 414 to the researcher survey. View the infographic here [PDF]. 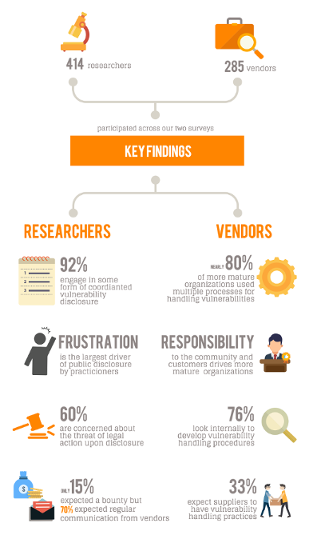 Building on the data for a brighter future

With the rise of the Internet of Things we are seeing unprecedented levels of complexity and connectivity for technology, introducing cybersecurity risk in all sorts of new areas of our lives. Adopting robust mechanisms for identifying and reporting vulnerabilities, and building productive models for collaboration between researchers and technology providers/operators has never been so critical.

The survey data itself offers a hopeful message in this regard - many of the respondents indicated that they clearly understand and appreciate the benefits of a coordinated approach to vulnerability disclosure and handling. Importantly, both researchers and more mature technology providers indicated a willingness to invest time and resources into collaborating so they can create more positive outcomes for technology consumers.

Yet, there is still a way to go. The data also indicates that to some extent, there are still perception and communication challenges between researchers and technology providers/operators, the most worrying of which is that 60% of researchers indicated concern over legal threats. Responding to these challenges, the report advises that:

“Efforts to improve communication between researchers and vendors should encourage more coordinated, rather than straight-to-public, disclosure. Removing legal barriers, whether through changes in law or clear vulnerability handling policies that indemnify researchers, can also help. Both mature and less mature companies should be urged to look at external standards, such as ISOs, and further explanation of the cost-savings across the software development lifecycle from implementation of vulnerability handling processes may help to do so.”

The bottom line is that more work needs to be done to drive continued adoption of vulnerability disclosure and handling best practices. If you are an advocate of coordinated disclosure – great! – keep spreading the word. If you have not previously considered it, now is the perfect time to start investigating it. ISO 29147 is a great starting point, or take a look at some of the example policies such as the Department of Defense or Johnson and Johnson. If you have questions, feel free to post them here in the comments or contact community [at] rapid7 [dot] com.