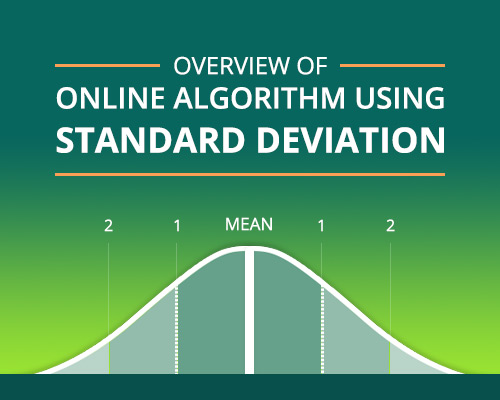 Here at Logentries we are constantly adding to the options for analysing log generated data. The query language ‘LEQL’ has a number of statistical functions and a recent addition has been the new Standard Deviation calculation.

LEQL query example
where(image=debian) groupby(location) calculate(standarddeviation:usage)
An interesting point that relates to this new function is that at the heart of its implementation is the calculation of ‘variance’ of the data using a specific type of algorithm – namely an ‘online’ algorithm. Once the ‘variance’ is found then the Standard Deviation is the square root of this ‘variance’ value. The challenge is finding the ‘variance’ for a sequence of data points, where it is not known before hand how many data points there will be.

An ‘online’ algorithm is one that is designed to handle processing input data that arrives in a sequence, and not as a complete set. Taking log events as a perfect example, this type of data arrives sequentially one event after the other. An ‘online’ algorithm is designed to process each new piece of data or log event as it arrives to produce a final result. Also note that such algorithms are not designed with any assumptions about future data that may arrive, such as how many events or when. These are the unknowns the algorithm designer must take into account.

The study of such problems that gave rise to such algorithms started long before the Internet came into being. It is fascinating to note the dates of when such work was done to generate the algorithms that are so critical to computing, telecommunications and the Internet today. With regard to the ‘online’ variance algorithm, this arose from the work of Scientist B. P. Welford who published a paper in 1962 on “a Method for Calculating Corrected Sums of Squares and Products” with an offered solution where values are used only once and need not be stored.

The following code example is that of an implementation in Java of a class called ‘StandardDeviation’ in which an ‘online’ algorithm is used as the basis of finding the Standard Deviation for a sequence of individual data points. It is based on an implementation example done by Sedgewick and Wayne. There is also a JUnit Test Class with two test methods – each of which use the same sequence of numbers as data – but where one version tests the result for the ‘sample’ standard deviation, and the other the ‘population’ standard deviation.

In the class above the setValues method will accumulate the data as it is fed each value from a sequence, one at a time. The simple, yet significant difference in calculation between ‘sample’ or ‘population’ can be seen in the two methods getVarianceSample() and getVariancePopulation(). Once the variance is found then the Standard Deviation is the square root of this variance.

In the JUnit test class above are 2 almost identical test methods that exercise the Standard Deviation class. Steps [1] to [3] in both methods are identical – [1] there is a new object created, [2] a list of numbers is created, with identical values for both test methods and [3] the list (sequence) of numbers is feed one number at a time to the 'sd.setValues()' method. The difference between the methods is seen in the [4] assertEquals – in one method we get the Standard Deviation using the ‘sample’ variance calculation while in the other method we use the ‘population’ calculation. As can be seen the resulting values are very different.

Note that Logentries does not take any responsibility for the content of external websites.

Use the LEQL analytic function Standard Deviation to examine the distribution of data points in your machine data. Try Logentries today with a free 30 day trial, get started.