Goodbye to the VCR: Rewinding Down Memory Lane 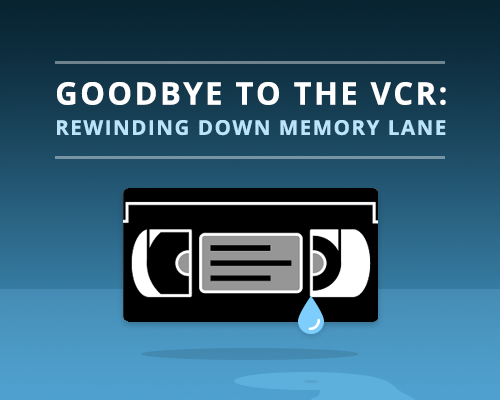 The VHS tape was a thing of a magic that is alien in the world of on-demand media.  It represented a promise of entertainment. A promise only realized when loading the tape into the player and pressing the play button. There was an air of excitement around every video, and you could never be entirely certain about what the video contained.

I was reminded of the mystique of the VCR just this month when I read about its final demise.  Funai Electric, the last major manufacturer of VCR players, shut down production of VCR players this last July.  This news wound me up a bit.  The VCR was such a fixture in my childhood.

I shared this sad news with my children   Their initial reaction was a glassy eyed stare of incomprehension.  My children are all under 10 so the idea of a media that isn’t streaming sounds archaic, and didn’t track for them.  Sure, they understand the concept of a player.  There is a Blu-Ray player collecting dust on the shelf above the TV.  For them to consider that there was something before even that neolithic device, and that its ancestor used tape media (no, not sticky tape I corrected them), was almost earth-shattering.

The VCR player, and its media, was so imperfect when compared to modern technology.  It was fraught with limitations and distribution issues that are no longer a reality in the space of personal media.  It forced experimentation and discovery.

The biggest limitation of the video cassette compared to modern media is its physical existence.  The video rental store always had a finite number of choices dictated by its size and inventory.

This limitation is where the true magic of the VHS started.  Many beloved films of my youth were only discovered because everything else I wanted to watch was already rented.

If I had a nigh-infinite catalog of choices I never would have rented The Adventures of Buckaroo Banzai Across the 8th Dimension.  That movie is such an insane masterpiece of crazy 80s cinema.   By the time the movie ends, love it or hate it, you are never exactly sure of what you just saw.   To this day, I still consider it one of my favorite John Lithgow performances.

I doubt that a small slasher called *Sleepaway Camp II: Unhappy Campers *would have intrigued me in the face of much glitzier fare.  The port-a-potty scene still haunts me.  I was drawn in by a box cover that I feel was one of the best of its genre.  Pamela Springsteen stands front and center with a dangerous expression on her face.  Jason’s mask, Freddy’s glove, and Leatherface’s chainsaw all protruding from her backpack.  How could a movie with that iconography not be amazing?!?

The allure of great VHS box art was often enough to get into a potential customer’s head and guarantee a rental.  After all, VHS box art and a marketing blurb on the back was all the detail you had.  (Un)Fortunately, neither the art or the blurb could be trusted to be accurate.  Every movie watched or rented was a gamble.

Like true gambling, the house always won.  A rented video was usually watched to the end.  No one wanted to go back out to the video store in the middle of the night and rent another movie.  Even if the film was pure trash, you watched it to the end because there was no other option.

The video store was only the surface.  There was an entire network of underground movies that couldn’t be rented or bought.  If you wanted to watch one of these gems (actually they were usually trainwrecks) whose existence was only rumored, you had to get your cousin’s friend’s brother to make a tenth-hand copy of the tape for you.  These films had often been copied so many times that the picture was muddied and dull, giving them a grimy feel that rivaled even the best grindhouse film.  My first introduction to Sam Raimi, and my personal hero Bill Campbell, came from one such tape.  I can vividly remember the afternoon where I watched the travesty that was Evil Dead 2 – a film I love and quote to this day.

After the video store and the second hand film was the “All Night Cable Recording”.  Every neighborhood had at least one father who would put a fresh tape in the recorder on a regular basis, turn on a cable station, and let it record for the full 6 hours of an EP recording.  My friend Tim and I would spend hours watching this badly muddled recordings of movies – good, bad, or bland. Each tape was a potential treasure trove of new entertainment.

The mystique around the VCR didn’t end with mystery.  The VHS tape also harbored the potential for mind scarring tragedy.  Imagine this scenario: An important event like a wedding video, important sports event, child’s birthday, is recorded and put aside to watch in the future.  Fast forward time to when someone really needs to tape something and isn’t pay attention, and they grab the tape that was put aside.  That treasured memory is lost but no one knows it yet.  It isn’t until sometime later when everyone gathers around to relive that memory, and somewhere in the middle of blowing candles out on a birthday cake, the screen goes fuzzy, and the child party is replaced by the final episode of Family Ties (or worse).  This risk scarred the public consciousness to the point that sitcom episodes were made about it, such as “Everybody Loves Raymond”’s Tenth Anniversary episode.

The closest my kids will come to this excitement is the random YouTube clip.  The joy of discovery that the VHS tape offered doesn’t exist anymore.  Almost every piece of media has been summarized, scrutinized, and railed against somewhere on the Internet. Technology always winds forward. The great technologies of today soon become the obsolete paper weights of tomorrow. The VCR had its time and it was magical.

What’s your favorite VCR memory?  What movies did you discover through the world of VHS tapes?  Let us know in the comments section.