The Generosity of Thought: Caring and Sharing in the Open Source Community

I want to share something with you that is pretty amazing. But, before I do, allow me to provide the backstory. 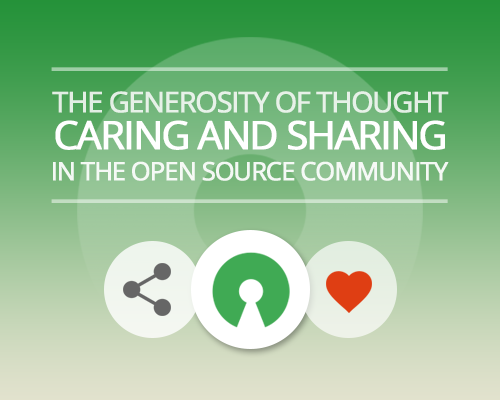 I’ve been using Open Source Software (OSS) for a while now. I started with the big ones, Apache, Maven, MySQL, etc…. But, as time went on and my work became more specialized, I started using smaller projects. When you use the big projects such as Maven and Apache, there’s a boatload of books, videos and articles that you can use to learn what you need to. However, the smaller projects don’t have the same breath of resources. Thus, sometimes it can be a real chore getting Open Source Software up and running for mission critical work.

My working style is to not beat around the bush when I can’t get code to work. When I hit a wall, I go to the source, no pun intended. When I am jacked up, I contact the project by posting a question/issue on StackOverflow or GitHub, Sometimes I write the project’s creators directly.

Now, here is where it gets amazing.

It’s my practice when I get help with paying work to compensate those that help me. On more than one occasion I’ve contacted OSS contributors to pose some pretty complex problems. When a question gets answered to my benefit, I inquire about an amount I can send to the helping party as compensation. And to date, every time I have done so, I have been declined.** That’s right! My offer to pay has been refused!** But, I insist and typically end up sending an Amazon Gift Card.

Still, the experience was pretty amazing so much so that the pattern piqued my curiosity. I needed to find out what was going on. So I asked a few of the people that have helped me to learn more. Here is what they told me.

Brandon Goode, is the publisher of the Open Source project, Dynamoose. Dynamoose is a modeling tool for Amazon Web Service’s DynamoDB. Dynamoose allows NodeJS developers to work with data in DynamoDB through abstract models. Brandon spends about 2 to 10 hour a week answering questions about Dynamoose. I know, I am one of the people he’s helped out. I asked Brandon why he spends the time answering questions about his project without expecting compensation in return. He replied:

“I enjoy helping other get their project working and I get a lot in return too. The community is the best QA department I’ve ever worked with. Not only will they help find bugs and flawed logic, but they will fix it. It’s a cool feeling to know others are using your work. “

He is not the only one. Consider Jeremy Whitlock.

Jeremy Whitlock participates in many significant Open Source projects, Kubernetes, Node.js, OpenAPI (formerly known as Swagger), and Subversion, to name a few. I got to know Jeremey when using Swagger-Tools. As is my practice, when I hit the wall, I write to someone in the know, in this case, Jeremy. As has become my experience, Jeremey was more than helpful. Turns out that Jeremy splits his time working on Open Source projects supported by his employer as well as taking care of his own work. Jeremy spends anywhere from 4 to 20 hours a week supporting his personal projects. When asked why, this is what he told me.

“I like to pay it forward. OSS has helped me so much and so I want to help the OSS community. I also think OSS is great on the resume and so being involved with the right communities, like Kubernetes and Node.js, looks great.”

Again, as is the case with Brandon, Jeremy enjoys professional benefit from helping others. But, with his talents and experience, Jeremy could ignore the calls for help on his Issues page and in his InBox. He would not suffer a bit. Yet, he doesn’t. Why? The notions of sharing, helping the next guy out, and taking care of the community loom large on Jeremy’s horizon.

Which brings us to Seth Kenlon.

“Open Source is the natural state of humanity”

In addition to the days a week that Seth spends making code for his projects and the other projects to which he is a contributor, he devotes about 8 hours a week answering emails from those using his software. Of course, I asked him why. He reports:

“Open source is the natural state of humanity. We humans don’t really want to be greedy and hoard knowledge and power. We just do that when we get scared of starving or scared of not being recognized for what we do, or whatever we fear. But deep down, most people want to share. … I contribute to open source because I believe it’s the correct way for society to manage itself, to provide itself with tools and technology, and to improve the lives of its members.”

Wow. There’s not much more to say after such remarks.

A Call to Action

When I first started to experience the extreme generosity of thought extended to me by the Open Source Community, I got a sense that something more than slinging code was going on. I have come to believe there is. At the heart of it all is the notion of community. There are those of us on the planet that think that a community is a collection of people with common interests, who make contributions that provide benefit to the individual as well as to the group.

Sounds just peachy, huh? But beware, there is an another point of view that asserts that if someone can get something for nothing, he or she will.

The Open Source community has, to date, been a working example of the former: community members making contributions for the benefit of all. But, there is a rub. In order to be a contributor to an Open Source project you need to have the time to make a contribution. Or to put it another way, you need to have the time to volunteer in order to be a volunteer. Sadly, many of us don’t. We have mortgages to pay and kids to feed. We don’t have employers or sponsors that will subsidize an OSS effort. Or, our college coding days are well over. We need to get paid for the work we do. The car payments demand it.

But still, for those of us that have to make a buck to get over and use our spare time to coach our kid’s Little League, do we really want to be that person who think it is perfectly alright to get something for nothing? I know that I don’t. Thus, I send the Gift Card.

So, the next time you download a piece of Open Source Software that becomes a part of your professional life, or your issue gets answered on GitHub, seek out the person helping you out and help him or her out, even if it’s onlu sending a $5 Gift Card or a free movie ticket. At least do something. Make the effort, please. Because, as we have learned out on the terrain, a community in which taking exceeds giving ain’t!