Roots and Culture: Logging and the Telephone Bill 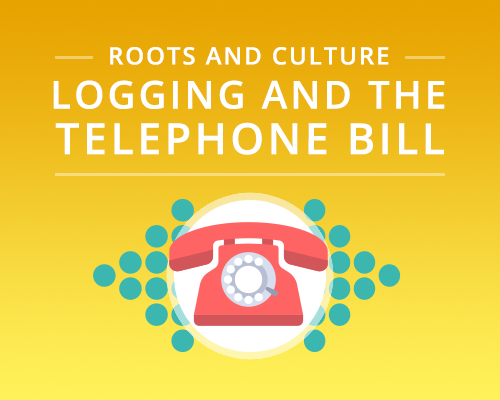 Telephone systems were the Internet before there was an Internet.

By 1920 millions of people were exchanging data on a worldwide network using a device that connected on demand. Sounds like the Internet to me.

But unlike the current day Internet, the telephone system cost money to use. Alexander Graham Bell’s investors wanted it that way. That’s why they gave him the money. Thus, people who used the telephone system had to pay for it. So going as far back as 1877, every month millions of people were billed for the service they used. This might not seem like a big deal, but think about this: each of those millions of bills were calculated, printed and sent without the aid of any digital computing or magnetic storage whatsoever. It’s an amazing fact to ponder. And being the tech-head I am I wondered, how was a telephone bill created back then? So I did some research and it turns out that at it was all about logging.

Allow me to elaborate.

How a telephone system works 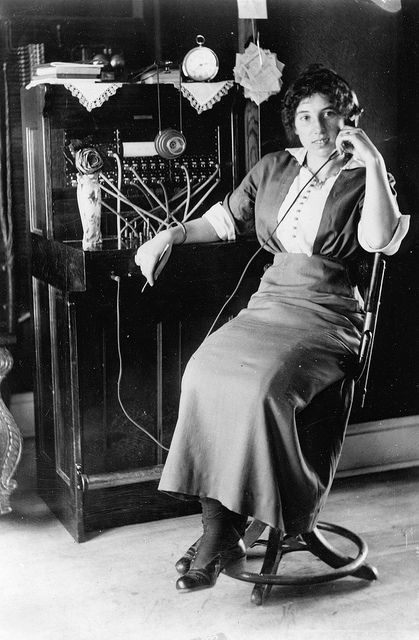 A telephone system works on a single principal: connecting one telephone to another with a single wire. In the old days before electronics came along, this connection was facilitated by a human called a telephone operator connecting two parties using a physical device called a switchboard.

Your telephone wire along with all the other telephone wires in town were connected to the switchboard that was controlled by the telephone operator. The operator knew everybody’s wires. When you wanted to make a call, you picked up your telephone and said, “Please connect me to Joe”, for example. The telephone operator knew your wire and she knew Joe’s wire. She took your wire and Joe’s wire and connected the two wires by physically plugging the jack at the end of each wire into a set of holes that shared a common connection in the switchboard. Also, the operator wrote down on a piece of paper the time the called started and that you initiated the call. This piece of paper was called a toll ticket. The operator listened in to the call at intermittent intervals, monitoring the conversation to determine when the call ended. When the call ended, she disconnected the wires from the switchboard and made an entry on the toll ticket noting the end time of the call. Your call was logged using the toll ticket. Let me repeat this again so it sinks in, your call was logged using the toll ticket

Using the “get me Joe” technique was great as long as the operator knew your wire and Joe’s wire. But, things grew. Operators went from supporting a hundred people to thousands. Thus one office might support multiple switchboards. Also, people wanted to call friends, family and business associates who were in other offices. Thus, a more formal structure was required. So, each telephone wire, a line, was given a number. And, the office, also known as the exchange, was given a number too.  Hence, a numbering system was created that facilitated calls between exchanges. The format of the numbering system was:

XX is the identifier of the exchange

Y YYYY is the identifier of the customer’s telephone line 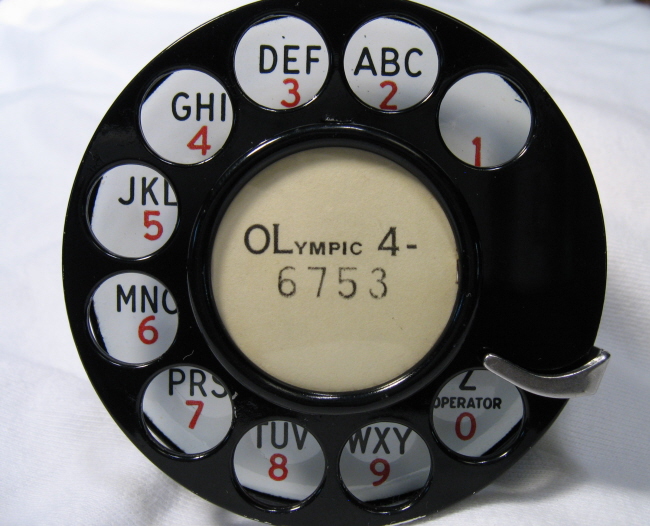 With exchange identification in place, a customer called up the operator and said, “Please get me Olympic 4-6753”.  In those days the first two digits of the number, which represented the exchange, were given a character value, and friendly name. For example, as shown in Figure 2 below, the identifier 65, which corresponds to the letters OL on an old rotary telephone, was assigned the name, OLympic. 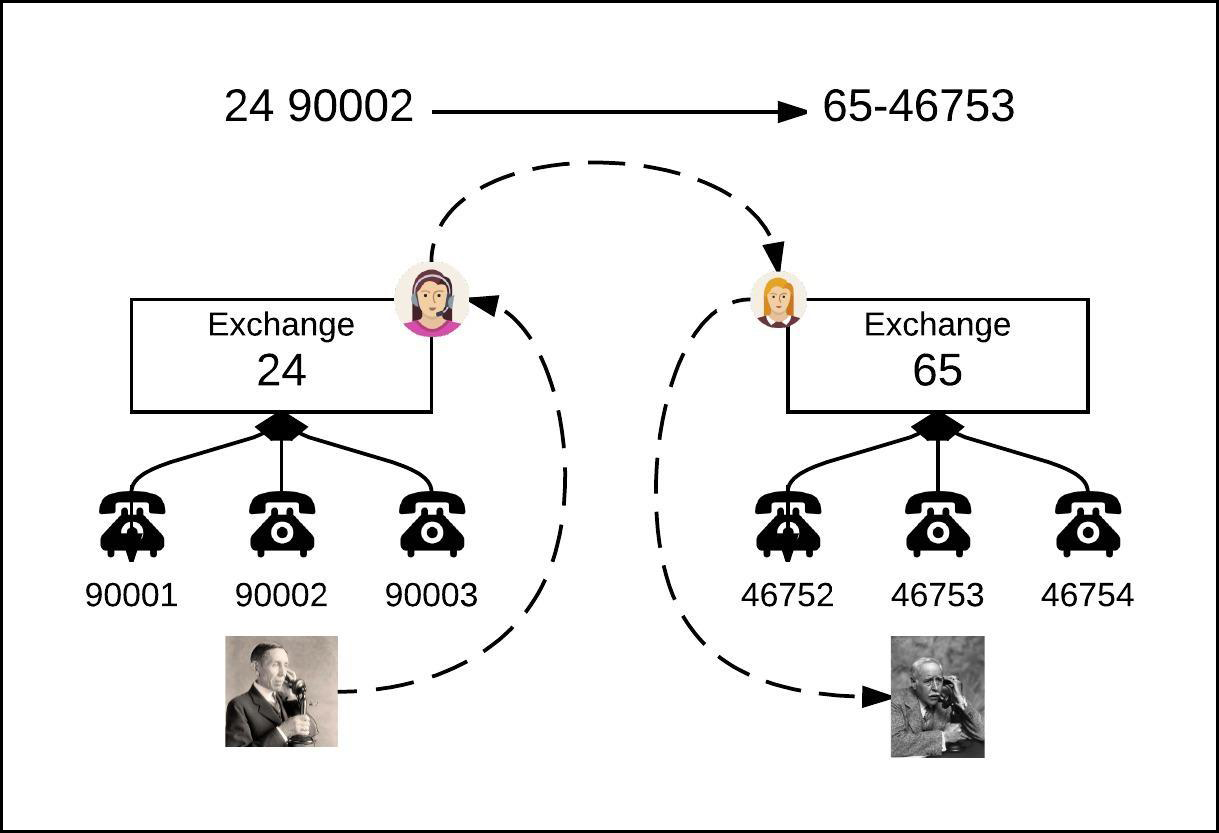 How much did it cost to make a Transatlantic telephone call in 1930?

As the telephone systems grew, from local exchanges, to area code, to country codes, the process of billing changed too. International calling involved many operators among many telephone systems. A call to from New York City to London involved both the American telephone company, AT&T and the British company, the General Post Office. In terms of billing for international calls between the US and Europe, the process was to have the American customer billed by AT&T for the call. The European telephone company, in turn, billed AT&T for the call. At the end of the month, the domestic customer made payment to AT&T. In turn, AT&T paid the European company. The profit was determined by the difference between the amount the customer paid to AT&T and the amount AT&T paid the European provider.

Eventually, automation replaced the human labor that connected the many segments of wire together required to create one continuous stretch of wire over which the human voice flows. Rotary dialing technology made it possible for a machine to figure out how to connect Jerry to Joe.

Operators were still required for national and international calls as well as special services such as collect calling where the cost of the call gets reversed from the person making the call to the person receiving the call. In fact, calls involving operator assistance were called, toll calls, a reference back to the old logging mechanism using toll tickets. National calling gets automated and followed by international calls. And as more automation come into play, the cost of calling in terms of time and money drops.

In 1915 it took 5 operators 23 minutes to make a connection between New York City and San Francisco. Today the callers connect in a second or two. The cost of that call back then was $20.70, almost $400 in today’s dollar. Today the cost of a long distance call is free, just a part of the monthly bill for your cell telephone. So, speaking of bills, let’s get back to them.

As I mentioned at the start of this piece, telephone systems were intended from inception to make money. The joke passed around by old telco guys is that the essential architecture of a telephone system is a communication network wrapped around a billing process. Thus, in order to make money, bills needed to be created and these bills were based on log entries made by the operator. Hence, the toll ticket. The toll tickets were collected at the end of each day, tallied up and entered in a ledger. Again, you can think of the toll ticket as a log entry.

At the end of the month the ledger entries, another form of logging by the way, were added up and a bill was created. A human collector took the bill and called upon the customer directly for payment. (Please see Figure 5 below.) 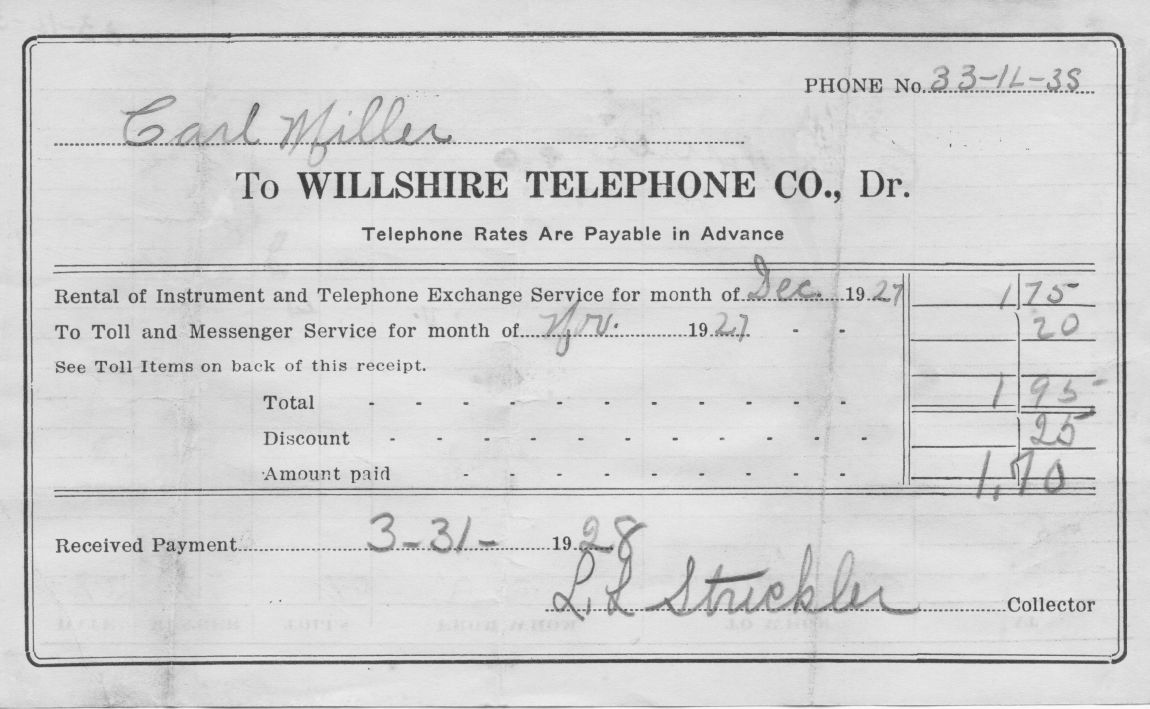 Eventually electromechanical automation in the form of  message registers replaced the manual entry of that went with creating toll tickets. A message register is a device similar to a gas meter. Only instead of measuring gas usage, the meter measured electrical pulses sent by an exchange during the duration of a telephone call. The number of pulses per second related to the cost of the call. Expensive calls sent a lot of pulses, less expensive calls sent fewer pulses. Each month a technician came by and read the customer meters, logging the number of pulses, a.k.a message units. Again, as with toll tickets, a bill was created based on a logging system.

Logging technology changed as operator free calling progressed. Message registers were no longer able to handle the volume of logging demands. Telephone switches, the automated substitute for operators, were connected to a machine that logged call activity by punching holes in a piece of paper about 5 inches wide, similar to the way a ticker tape operates. (Please see Figure 6, below) 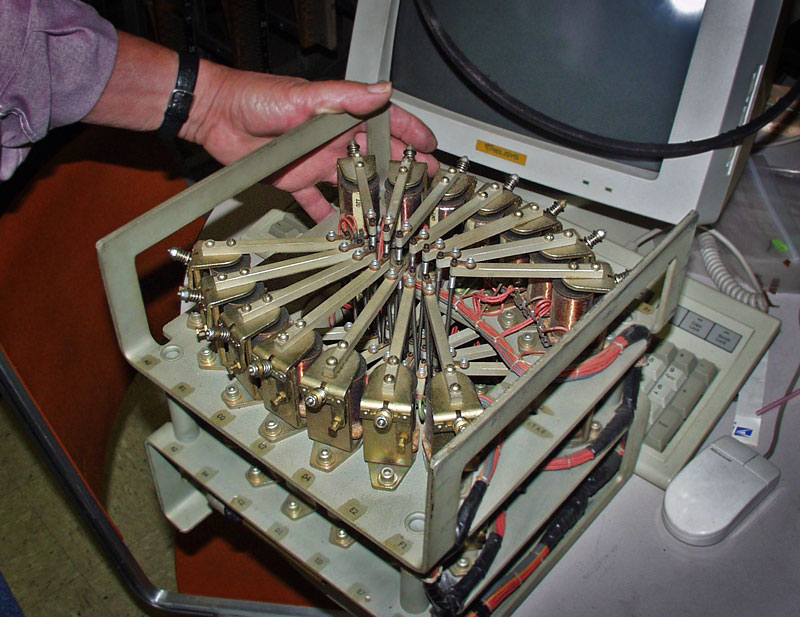 The paper in which call information was recorded is called AMA Tape. An AMA puncher machine made perforations in a Braille-like format that reported the caller, the callee and the call duration. (Please see Figure 7, below) 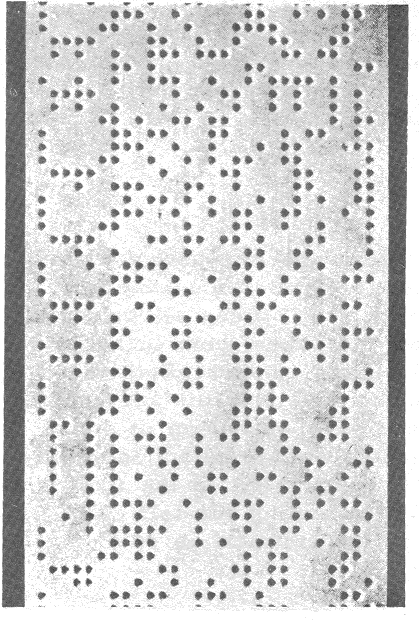 Each day a technician cut the AMA tape from the hole punching device. The tape was taken to the accounting department where the call information represented by the perforations in the tape were converted into bills. Later, as computers and magnetic storage became commonplace, magnetic tape was used instead of the paper. Switches sent the information to tape and computers did the processing. But, still as you can see, no matter the technology, when it comes to making money from telephony, logging is essential.

The fundamentals that make the Internet work today have been there since Graham called Watson in 1875, maybe even to Samuel Morse. You had a device that somehow discovered another device on a network, then once connected, information was exchanged. The need to exchange information beyond the sound of one’s voice has been with use for a very long time.

It’s my thinking that the needs of a society have been constant throughout history. The need for food, clothing, shelter, travel, communication and defense have been around since mankind roamed the plains of the savanna. Technologies emerge as a way to meet these ever present needs. Logging is no exception. We’ve always want keep track of things, particularly when it comes to matters of money. We might like to think that all those log entries being made today are special to our time. But, they’re not. We’ve been logging since before the first Roman census. All that’s changed is that today we can log faster, with more accuracy and less cost than ever before.

So the next time you are writing up some scripts to analyze your system’s log data in ways you think the world has never imagined, that you are doing something new and special, that your technology is amazing and the world is completely different because of your efforts, remember this: A hundred years ago somebody was sitting in a room with a telephone switchboard, tallying up a day’s worth of toll tickets and feeling pretty much the way you do now.