Over the last couple of years, some of the most serious and widely publicized vulnerabilities have been related to the Transport Layer Security (TLS) protocol and its predecessor, Secure Sockets Layer (SSL). Because TLS is so fundamental to keeping network communications secure, new flaws that are discovered can have a disproportionate effect on an organization's risk.

From Heartbleed to POODLE, FREAK to Logjam, system administrators dread the next vulnerability announcement with a catchy name or custom designed logo that will require patching and/or reconfiguring any services using TLS. The October 14th release of Nexpose (6.0.2) contains a number of improvements related to TLS that will make it easier for administrators to track which versions of the protocols are supported by assets, along with which cipher suites are enabled. We've also broken up our weak cipher vulnerability into multiple vulnerabilities to make it clearer why particular cipher suites are flagged as insecure. (Note that we will continue to ship the old ssl-weak-ciphers vulnerability alongside the new ones for a period of time to give customers who typically do content-only updates a chance to get the required product changes without losing coverage.)

The most significant enhancement with this release is that Nexpose now enumerates the protocol versions (SSLv2 and v3, TLS v1.0, v1.1 and v1.2) and associated cipher suites for each TLS endpoint that gets scanned. This information is stored in the service configuration, accessible by clicking on the Service Name under the SERVICES section of an asset's page:

A number of new configuration settings are available: 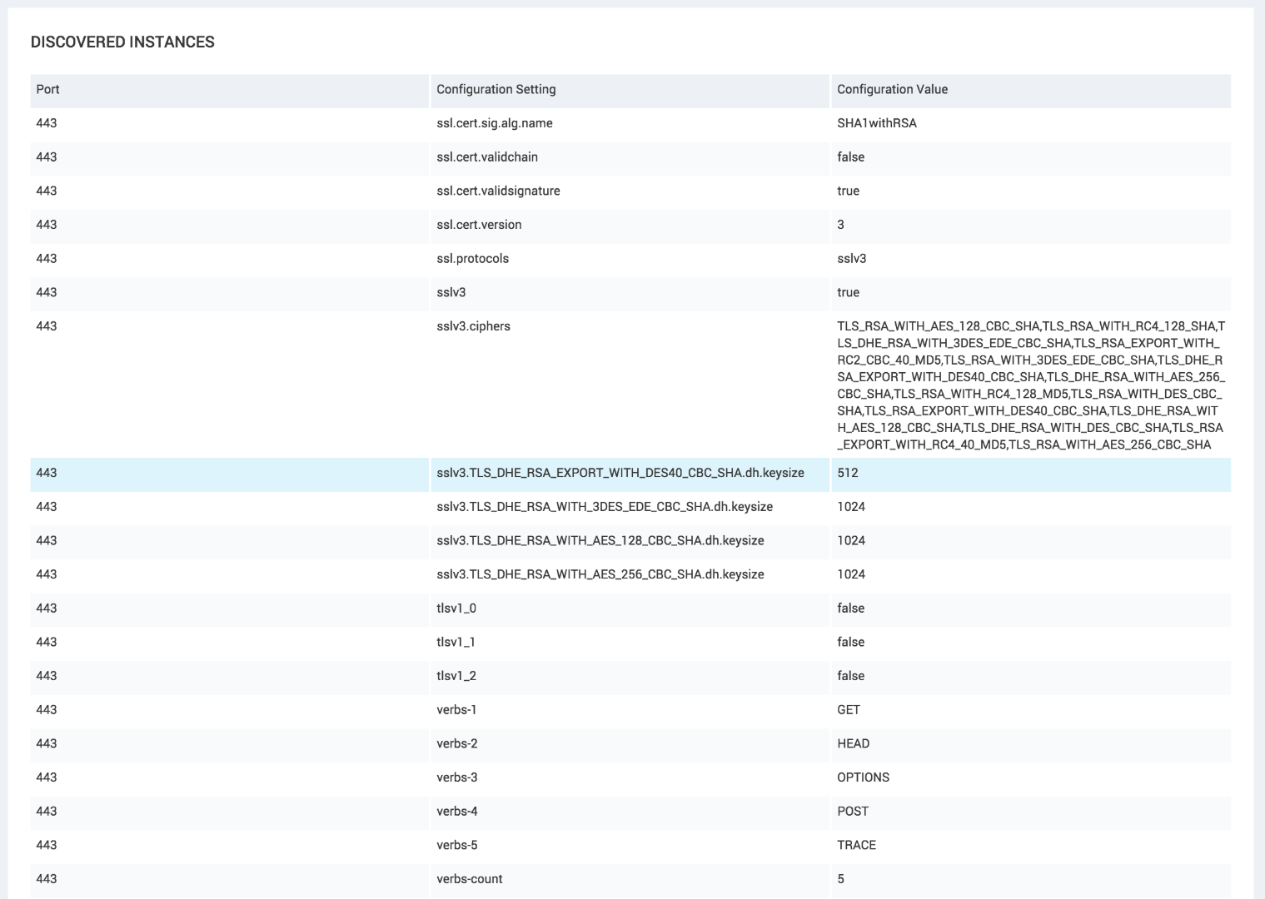 The new ssl.protocols configuration setting is a comma-delimited list of protocol versions supported by the endpoint. As a convenience, the sslv3, tlsv1_0, tlsv1_1, and tlsv1_2 settings contain "true" if that protocol is supported, or "false" if Nexpose was unable to connect via that version. In this case, we can see that only SSLv3 is supported. The sslv3.ciphers setting is a comma-delimited list of cipher suites available when using SSLv3 to connect to the service. There are also dh.keysize settings indicating the size of the key used by cipher suites that use Diffie-Hellman key exchange.

Although having all the cipher suites in the service configuration is convenient for taking a quick look at how a service is configured, it does not lend itself well to bulk or offline analysis. To facilitate this, the data can be exported as a SQL Query Export with a row per cipher suite. This is done by going to the Reports tab, choosing Create a Report, giving it a name (here "ciphersuite export"), choosing the Export tab and then the SQL Query Export template: 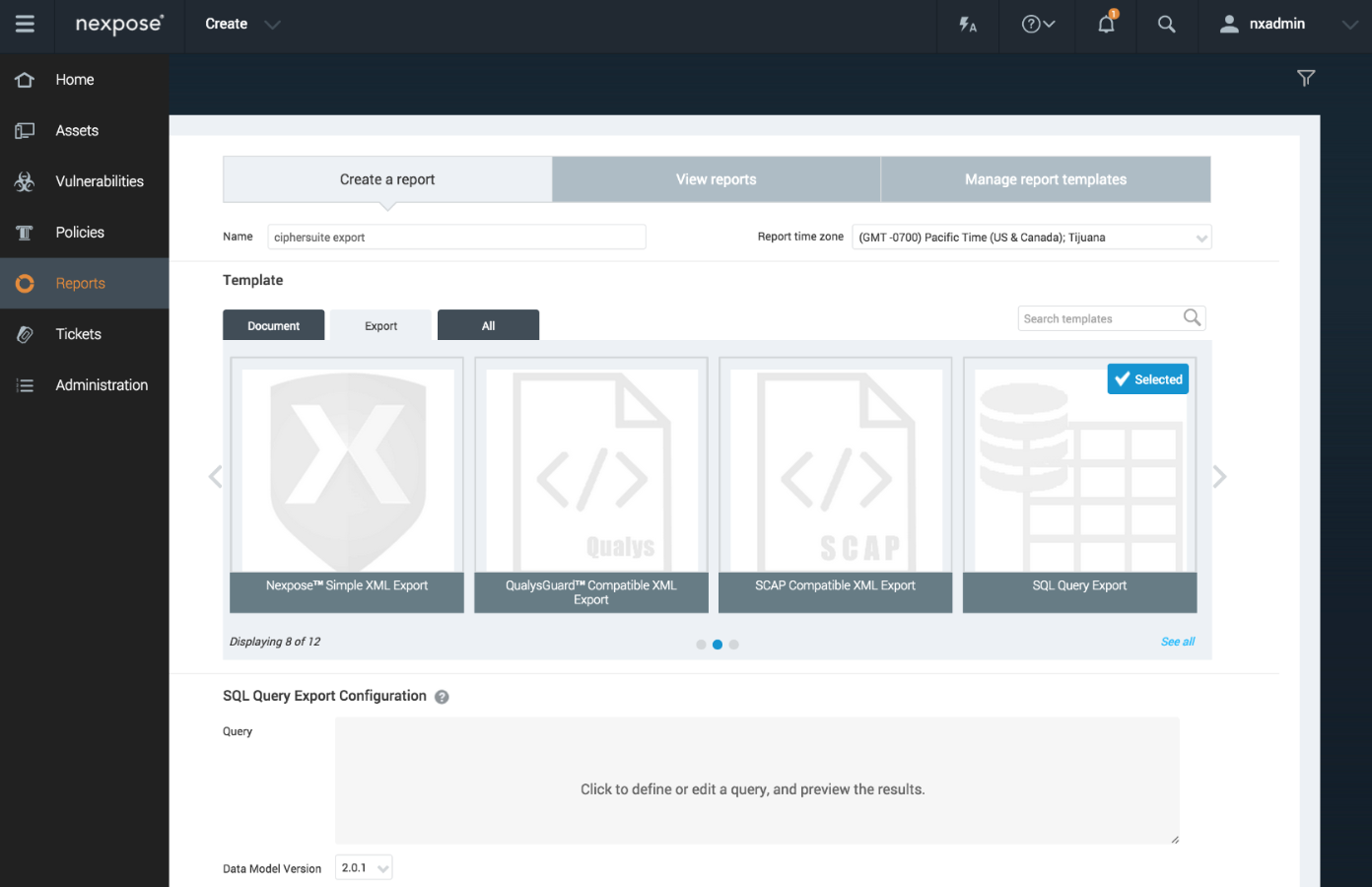 Next, define the query that will expand the comma-delimited list into individual rows:

will convert the comma-separated list into an array (string_to_array) and then expand it into a row per cipher suite (unnest).

Now, select the site and scan of interest, then save and run the report: 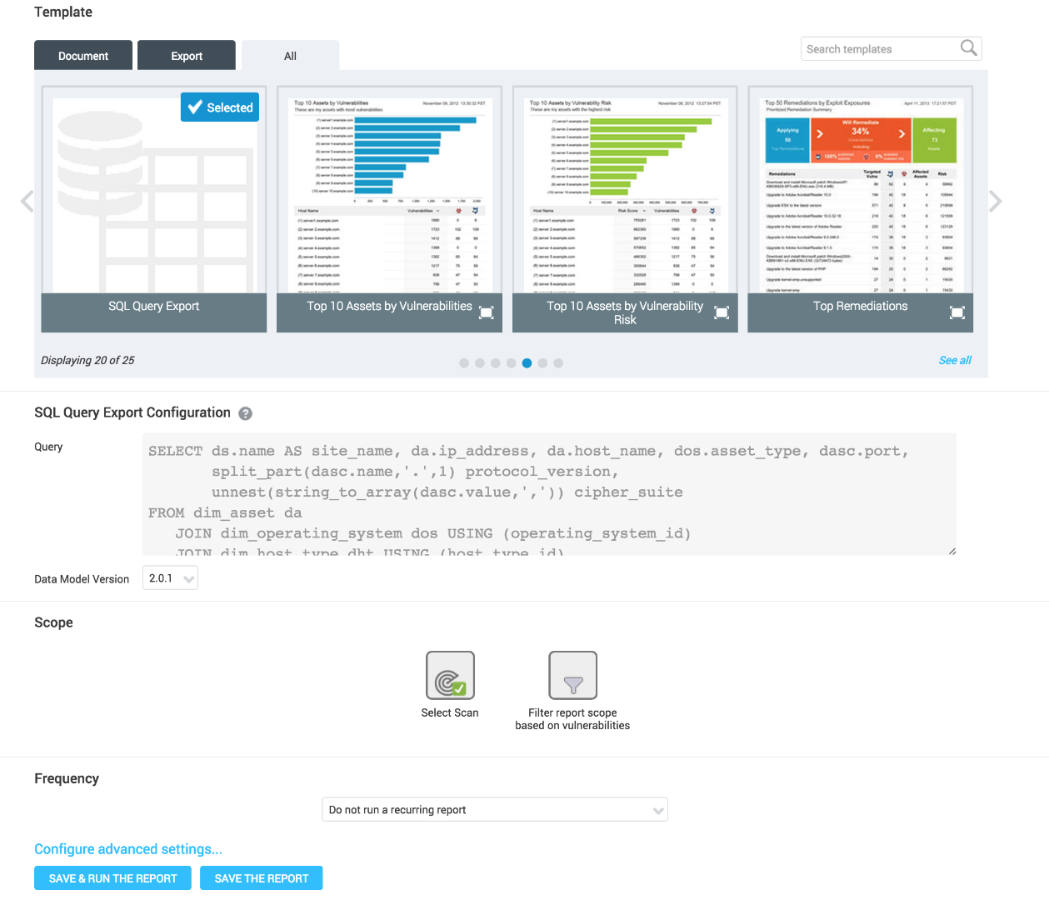 Once the report has finished, you can download it as a CSV file containing rows with the site name, host name, IP address, protocol version and cipher suite: 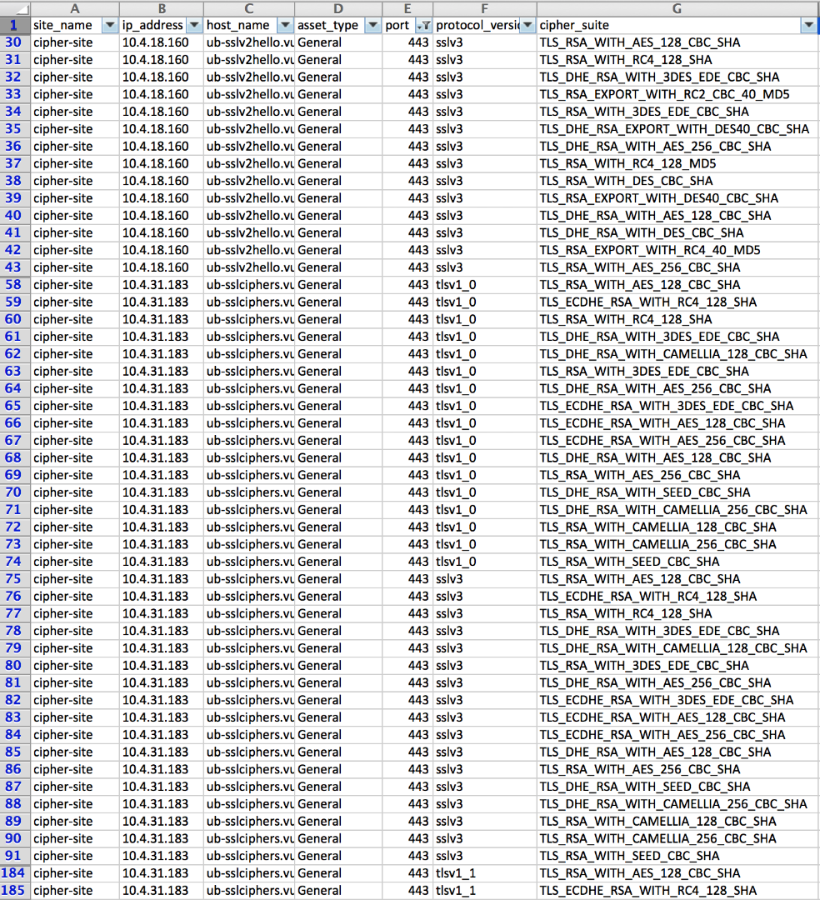 We have also expanded our three previous vulnerability checks into seven new checks.  This allows more direct explanations as to why a cipher is weak and vulnerable. To accommodate customers who will only perform content updates this release, we are shipping the new vulnerability checks alongside the old checks. This is just for a transition period and it is recommended to update Nexpose to prevent loss of coverage when the old checks are deprecated.

The seven vulnerabilities are:

Note that ssl-rsa-export-ciphers and rc4-cve-2013-2566 already exist in Nexpose. The more generic ssl-weak-ciphers vulnerability will be deprecated in an upcoming release.

Along with all these additions, this release fixes various outstanding issues with Nexpose's TLS coverage. These changes also lay the groundwork for further TLS improvements, coming soon!