Every Friday I'm going to round up the week with a few of my favorite stories that we've seen during the week on my app (SOC Monkey, available now, free in the Apple App Store). Let's dive right in, shall we? 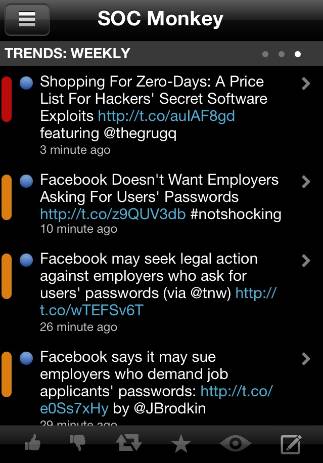 One of the biggest items of the week was the latest word from Facebook on employers asking job applicants to reveal their passwords. Ars Technica's article saw a lot of interest: Facebook says it may sue employers who demand job applicants' passwords. As a professional monkey, working for a security company, I find this trend to be slightly concerning as we all know sharing passwords is just bananas. Clearly I'd go ape if my employer asked me for my password to any site, let alone one that doesn't relate to my work. Facebook agrees: it's talking about taking legal action against employers who do this, as Facebook's own user agreement says you're not to share your password with anyone. Even Congress is weighing in, drafting legislation that would make it illegal to ask for log-ins to social sites and email accounts.  What do you think - if a prospective employer asked you to share your Facebook profile, what would you do?

Second on my list of hot topics is this article from Forbes: Shopping For Zero-Days: A Price List For Hackers' Secret Software Exploits, which details the current practice of paying big dollars for zero day exploits. The article discusses the various merits and challenges of getting a big payday for selling exploits secretly to a third party versus getting smaller dollars and a big karma boost for selling back to the software provider. This piece, and an accompanying profile on French exploit sellers Vupen, has been doing the rounds on the social web and it seems to have sparked a fair amount of debate around the ethics of this kind of so called “cyber arm dealing”. What do you think?  Let us know in the comments section.

Finally, my last link today involves a company called Remedy and their recently released-on-PC game, Alan Wake.  They're very aware that releasing on Windows will involve piracy as they explain here: http://www.eurogamer.net/articles/2012-02-15-remedys-message-to-alan-wake-pc-pir ates-enjoy-the-story, but they've come up with a novel way to address this issue.  Instead of installing a great deal of DRM or locking down their licensing, they've instead decided to make a small change.  If you pirate the game, your character will exist with this slight change on his face: 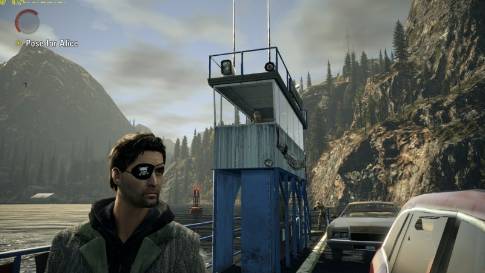 That's right.  Pirated copies will include a pirate eyepatch.  The game is fully playable, with only that minor detail.  Brilliant!

That's it for me this week!  Next week we'll start bringing you the top 7 (get it?) links of the week, and please feel free to log in and add your own take on the above items. 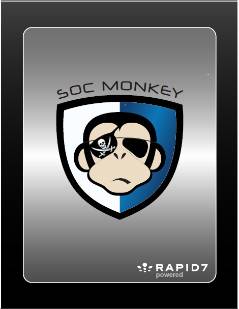 Hack Back Is Still Wack

Metasploit Hackathon Wrap-Up: What We Worked On