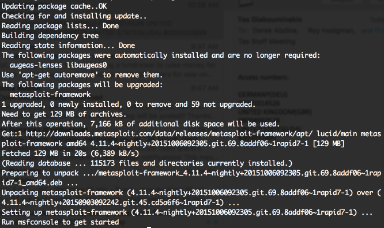 Rapid7 has long supplied universal Metasploit installers for Linux and Windows. These installers contain both the open source Metasploit Framework as well as commercial extensions, which include a graphical user interface, metamodules, wizards, social engineering tools and integration with other Rapid7 tools. While these features are very useful, we recognized that they are not for everyone. According to our recent survey of Metasploit Community users, most only used it for the open source components, preferring to use the command-line tools over the graphical ones. Also, while we do our best to ensure that Metasploit Community and Pro releases are of high quality, they are not always supplied with the latest hot new exploits and payloads available in Metasploit Framework. 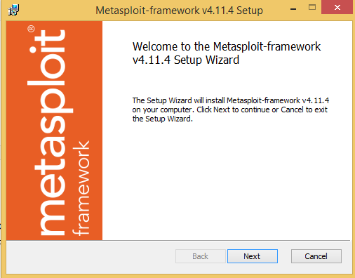 While it has always been possible to simply setup a development environment and run the latest metasploit-framework code from github directly, it can still be tricky to setup and keep up to date. Kali Linux 2.0 now publishes the open source pieces of Metasploit Framework with its distribution, but the release schedule still follows that of Metasploit Community / Pro editions, and it of course does not necessarily help those who prefer other operating systems. 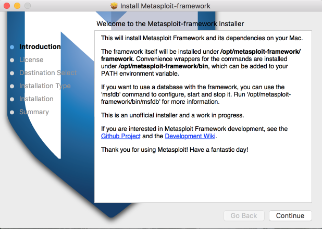 To address the needs of open source enthusiasts, those needing more frequent updates, or those simply looking for an easy way to setup a database for Metasploit Framework development use, we have created Open Source installers for Metasploit Framework for Windows, OS X and Linux x86 and x86-64 platforms. These installers utilize the Omnibus tool from chef in order to package everything needed to run Metasploit Framework, from dependent libraries, specific Ruby versions up to a built-in PostgreSQL database. The installers are easy to install and get up and running in seconds. They are also built and tested automatically each night, so you can always run 'msfupdate' and get the latest exploits and payloads without having to setup a development environment. The installers also integrate with your OSes native package manager, be it Linux RPM or DEB-based, MSI for Windows or PKG for OS X. That makes them easy to uninstall as well.