The Role of Logging in the Internet of Things

Let’s explore the importance of logging from IoT devices…

The IoT is defined as the interconnection of uniquely identifiable embedded computing devices within an existing internet infrastructure [1]. In plain English IoT is expected to enable the advanced connectivity of devices and systems, which would involve machine-to-machine communications (M2M).

The IoT is still in its early stages but some analysts predict that the IoT will boost the global economy by $1.9 trillion by 2020. This is creating an exciting atmosphere for start-ups and well established companies, both trying to grab a piece of that trillion dollar pie.

IoT devices are all around us.

Today, the most common devices are our smartphones and computers. However, the number of “things” in the IoT realm is expected to grow to 50 billion by the year 2020.

Additionally, new devices are constantly being launched; like the Belkin WeMo for example, which will accelerate legacy systems to be compatible with IoT infrastructures. This aims to retrofit existing devices not connected to a network, by allowing you to install their sensors and app controlled power outlets to control various devices in your home, like a TV or home heating.

The industrial sector is just one example of an application of IoT to the existing infrastructure.

Machines and sensors on a factory floor can be networked to create an interconnected system, which would allow for rapid manufacturing of new products, and have the ability to dynamically respond to product demands. Environmental monitoring for wind conditions, earthquakes, and tsunamis using early warning systems are critical applications that can benefit from being connected to the IoT.

Large scale deployments of the IoT are currently being deployed

One of the most impressive examples is Songdo, South Korea [4]. This city, which is one of the first to be fully equipped and wired, is nearing completion. Almost everything in the city will be connected, thereby generating a constant stream of data which will need to be managed by computers with little to no human intervention (!) 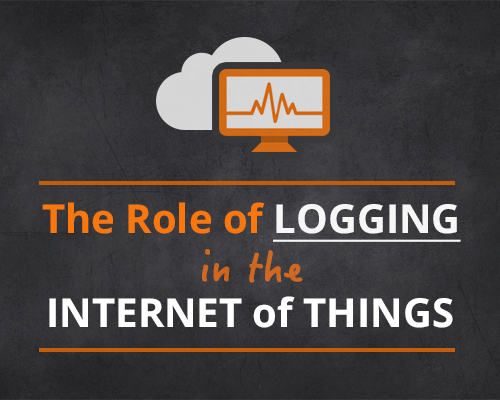 Logging and IoT: two peas in a pod?

We think so! Logging has been important across all aspects of technology ever since the dawn of computers, where logs were initially used to debug and monitor early systems. When it comes to IoT devices, and in particular M2M communications, it is vital that the system is monitored and managed to keep downtime to a minimum and resolve any important bugs or issues swiftly.

Since these devices should be able to work with little human intervention and may exist on a large geographical scale, I expect log data to play a crucial role in understanding system behavior and reducing downtime.

Since the IoT is still in its early stages, the supporting frameworks are not fully developed.

However, there is progress on frameworks enabling IoT devices to wirelessly connect and intelligently manage the flow of information among emerging IoT devices, regardless of form factor, operating system, or service provider.

[5] Traditionally, Syslog is the defacto standard used for computer message logging and transportation.

There is no current standard for the IoT log data.

This is largely due to the enigmatic nature and immaturity of the IoT space and all of the devices and possibilities it presents.

A major concern for IoT is security. Things like smart homes and local intranets are less susceptible to external attacks, but internal attacks and malicious insiders are still a real concern.

It has worked for traditional software systems and can be easily provided by using a log analysis tool that is tailored to notify the device owner of unauthorized access or an unusual reconfiguration for example.

Beyond the traditional logging use cases of IT Ops and security, machine generated log data is likely to provide insights into IoT systems from a business perspective in the same way it has done for software systems today.

The future will also bring new and interesting use cases that we cannot imagine right now.

The IoT is still in its infancy. It is fair to say that not everyone understands exactly where it is headed just yet, but people are certainly looking at the huge opportunities that it will present in the future.

Since logging plays such a huge part of computing and IT development, I expect that its role will be even more fundamental when working with the massive amount of data being generated by the IoT in the coming years.