On November 27, 2015, Stefan Kanthak contacted Rapid7 to report a vulnerability in Rapid7's ScanNow tool.  Rapid7 takes security issues seriously and this was no exception.  In combination with a preexisting compromise or other vulnerabilities, and in the absence of sufficient mitigating measures, a system with ScanNow can allow a malicious party to execute code of their choosing leading to varying levels of additional compromise.  In order to protect the small community of users who may still be using ScanNow, Rapid7 has made the decision to remove ScanNow and advises any affected users to remove ScanNow from any system that still has it.

Rapid7's ScanNow is a collection of several separate, standalone executables built over the past several years designed to give users and the community the ability to quickly audit themselves for some higher profile vulnerabilities that have made varying levels of headlines during this time:

The vulnerability disclosed to Rapid7 by Stefan is a generic vulnerability whose most official name is DLL Search Order Hijacking, but is also referred to as DLL side loading, DLL pre-loading, binary planting, binary carpet bombing, or similar names. DLL search order hijacking went more mainstream in 2010 when ACROS Security published extensive information about it here and has affected hundreds of products over the years and continues to do so.

This class of vulnerability occurs when a Windows application attempts to load a DLL or other library and does so with an unqualified search path. When the search path for the DLL is not sufficiently qualified, Windows has a predefined list of places that it will check for the library in question.  Included in that list are locations that could be untrusted or insecure, and if the library in question is found in one of those locations, it is possible that the loaded library contains malicious code which could lead to arbitrary code execution when the target executable is launched.

Upon investigating this vulnerability report, Rapid7 discovered that none of code written by Rapid7 for ScanNow utilizes any of the potentially vulnerable Windows API code for loading libraries or executing processes, let alone in such a way that allows the vulnerability to be exploitable in any scenario.  Instead, the vulnerability is present in ScanNow because of they way ScanNow is packaged and distributed, part of which includes 7-zip.  7-zip can be used for several things.  In the case of ScanNow, it is used to create a standalone self-extracting archive executable (SFX), which is basically just an executable that, when run, unpacks the actual ScanNow executable along with any resources it needs, and then runs ScanNow itself.  The root cause appears to be the same thing that affected the Mozilla Foundation in 2012 after a posting to full-disclosure.  It appears that this vulnerability remains unfixed, and another advisory posted by Stefan shortly after he contacted us indicates that in addition to 7-zip itself being vulnerable to DLL search order hijacking, all self-extracting archives created with 7-zip are also vulnerable.

When DLL search order hijacking vulnerabilities are discussed, the topic of whether or not these are remotely exploitable is an almost inevitable point that is raised and quickly detracts from the issue at hand due to the reaction it typically invokes.  While we are of the opinion that calling this a remotely exploitable vulnerability is a bit inaccurate, it is important to understand that there are "remote like" characteristics of this as shown below.

Exploiting a DLL search order hijacking vulnerability on Windows is not all that much different than exploiting LD_PRELOAD and similar style vulnerabilities in the UNIX world, namely that to exploit it, somehow a malicious library must be placed in a location that will be searched by the target application before the correct, expected library is found and loaded by an affected vulnerable application.  There are numerous ways this happens, including:

Additionally, the target system and application must be free of hardening measures designed to mitigate or prevent exploitation of this style of vulnerability.

As a trivial example of how this could be exploited, I used the following code, which simply launches the Windows calculator, calc.exe, whenever this DLL is loaded:

Then, link and compile as usual.  In this case, I used mingw: 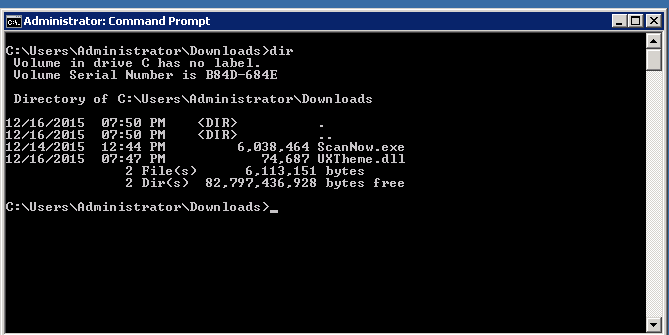 Then, when ScanNow is executed, either with an unqualified path when in Downloads or with a fully-qualified path, you can see that calc was executed, proving the existence of this vulnerability: 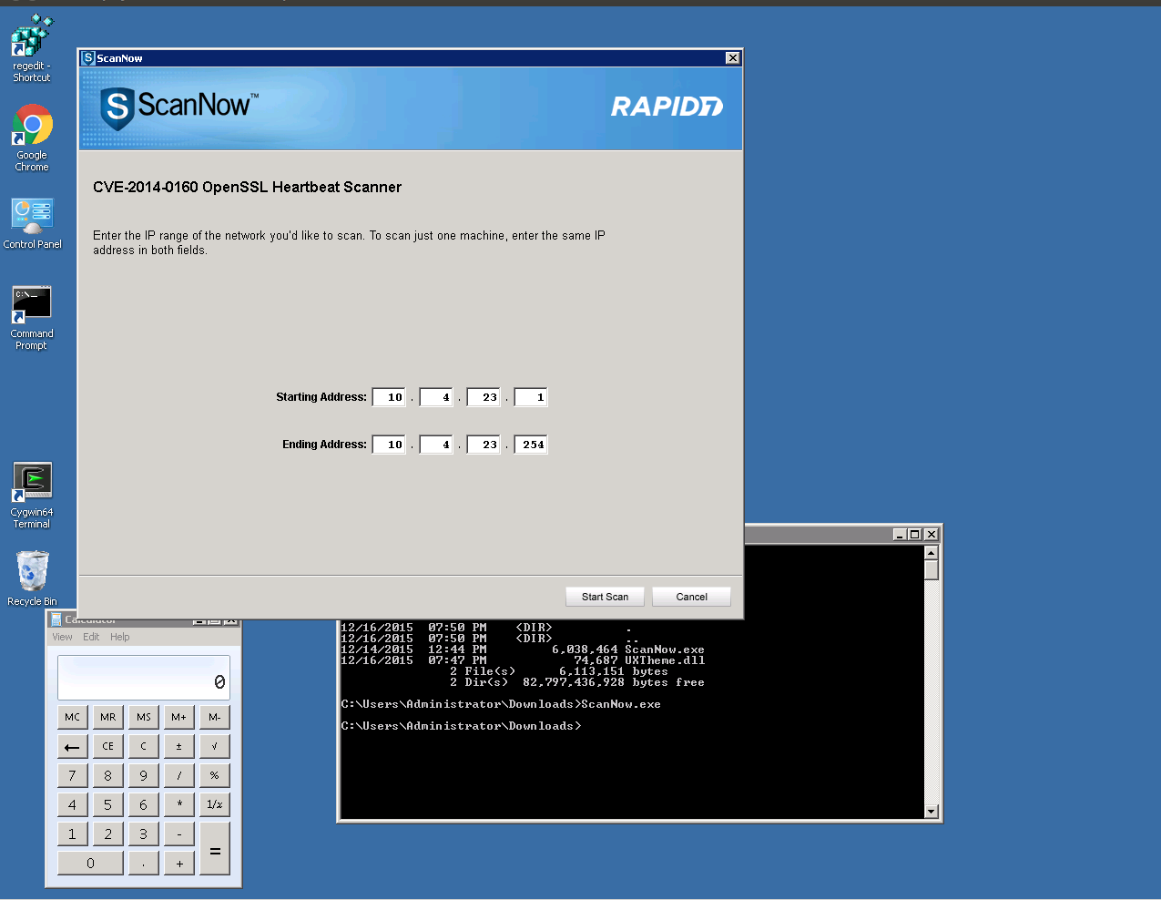 Obviously, the final part of exploiting this is getting the target system to somehow run ScanNow in a vulnerable environment which could happen with social engineering, exploiting another perhaps unrelated vulnerability or just getting lucky.

The nature of how ScanNow is built, distributed and used in combination with the particulars surrounding the vulnerability, its exploitation and the ways to mitigate it complicated Rapid7's response to this vulnerability.

It should be noted that there are various hardening techniques provided by Microsoft and others to help mitigate or prevent this class of vulnerabilities, however they are far from fool-proof and Rapid7 has experienced limited success when utilizing them to mitigate this particular vulnerability.  Some of these were:

In short, there appear to be very few workable options for the occurrence of this vulnerability in ScanNow, and it seems like this is a predicament many will have to contend with when faced with a DLL search order hijacking vulnerability.  Both of these areas may be ripe for future research.

Anyone who has downloaded ScanNow is advised to locate and remove the affected executables.  For any users who still have a need for ScanNow, both Metasploit and Nexpose have better coverage for the vulnerabilities that ScanNow previously covered.  For anyone who registered when downloading ScanNow over the years, Rapid7 will also be attempting to reach these users to advise them of the situation.

Rapid7 would like to again thank Stefan Kanthak for responsibly disclosing this vulnerability.