Digging for Clam[AV]s with Project Sonar

A little over a week ago some keen-eyed folks discovered a feature/configuration weakness in the popular ClamAV malware scanner that makes it possible to issue administrative commands such as SCAN or SHUTDOWN remotely—and without authentication—if the daemon happens to be running on an accessible TCP port. Shortly thereafter, Robert Graham unholstered his masscan tool and did a summary blog post on the extent of the issue on the public internet. The ClamAV team (which is a part of Cisco) did post a response, but the reality is that if you're running ClamAV on a server on the internet and misconfigured it to be listening on a public interface, you're susceptible to a trivial application denial of service attack and potentially susceptible to a file system enumeration attack since anyone can try virtually every conceivable path combination and see if they get a response.

Given that it has been some time since the initial revelation and discovery, we thought we'd add this as a regular scan study to Project Sonar to track the extent of the vulnerability and the cleanup progress (if any). Our first study run was completed and the following are some of the initial findings.

Our study found 1,654,211 nodes responding on TCP port 3310. As we pointed out in our recent National Exposure research (and as Graham noted in his post) a great deal of this is "noise". Large swaths of IP space are configured to respond "yes" to "are you there" queries to, amongst other things, thwart scanners. However, we only used the initial, lightweight "are you there" query to determine targets for subsequent full connections and ClamAV VERSION checks. We picked up many other types of servers running on TCP pot 3310, including nearly:

But, you came here to learn about the ClamAV servers, so let's dig in.

We found 5,947 systems responding with a proper ClamAV response header to the VERSION query we submitted. Only having around 6,000 exposed nodes out of over 350 million PINGable nodes is nothing to get really alarmed about. This is still an egregious configuration error, however, and if you have this daemon exposed in this same way on your internal network it's a nice target for attackers that make their way past your initial defenses.

5,947 is a small enough number that we can easily poke around at the data a bit to see if we can find any similarities or learn any lessons. Let's take a look at the distribution of the ClamAV versions:

You can click on that chart to look at the details, but it's primarily there to show that virtually every ClamAV release version is accounted for in the study, with some dating back to 2004/2005. If we zoom in on the last part of the chart, we can see that almost half (2,528) of the exposed ClamAV servers are running version 0.97.5, which itself dates back to 2012. While I respect Graham's guess that these may have been unmaintained or forgotten appliances, there didn't seem to be any real pattern to them as we looked at DNS PTR records and other host metadata we collected. These all do appear to have been just "set and forgot" installs, reinforcing our findings in the National Exposure report that there are virtually no barriers to entry for standing up or maintaining nodes on the internet. 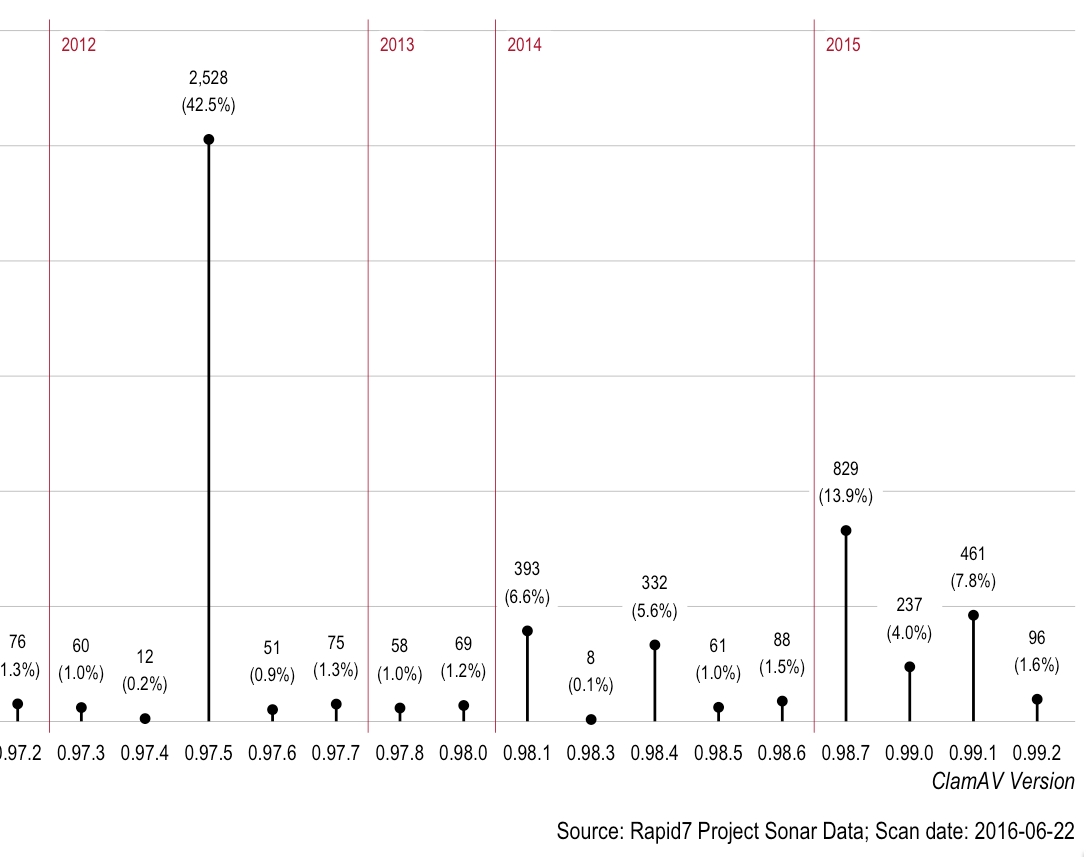 Now, not all VERSION queries respond with complete banner information but over half did and said response banner contains both the version string and the last time the scanner had a signature update. Despite the poor network configuration of the nodes, 2,930 (49.3%) of them were at least current with their signatures, but 346 of them weren't, with a handful being over a decade out of "compliance." We here at Rapid7 strive to stay within the rules, so we didn't poke any deeper to try to find out the signature (or further vulnerability) status of the other ClamAV nodes.

As we noted above, we performed post-scan DNS PTR queries and WHOIS queries for these nodes, but this exercise proved to be less than illuminating. These are nodes of all shapes and sizes sitting across many networks and hosting providers. There did seem to be a large commonality of these ClamAV systems running on hosts in "mom and pop" ISPs and we did see a few at businesses and educational institutions, but overall these are fairly random and probably (in some cases) even accidental ClamAV deployments.

As a last exercise, we grouped the ClamAV nodes by autonomous system (AS) and tallied up the results. There was a bit of a signal here that you can clearly see in this list of the "top" 10 ASes:

Over 40% of these systems are on networks within the Republic of Korea. If we group those by country instead of AS, this "geographical" signal becomes a bit stronger:

What are some takeaways from these findings?

Many thanks to Jon Hart, Paul Deardorff & Derek Abdine for their engineering expertise on Project Sonar in support of this new study. We'll be keeping track of these ClamAV deployments and hopefully seeing far fewer of them as time goes on.

Drop us a note at research@rapid7.com or post a comment here if you have any questions about this or future studies.