Firewall Egress Filtering: Why And How You Should Control What's Leaving Your Network

Most companies have firewall rules that restrict incoming traffic, but not everyone thinks to restrict data leaving the network. That's a shame, because a few easy configurations can save you a lot of headaches.

Firewall egress filtering controls what traffic is allowed to leave the network, which can prevent leaks of internal data and stop infected hosts from contacting their command & control servers. NAT alone won't help you - you actually have to restrict the ports through which your internal hosts can communicate with the outside world. Consider this interesting story on the Spiceworks Community about a company getting heavily infected with malware - and one of their lessons learned:

If you don't do any firewall egress filtering today, there are two basic directions you could go in:

The Firewall Egress FAQ from SANS is a great paper to help you with your journey. In a nutshell, here is the minimum level of traffic you should be filtering:

*Some folks will argue that blocking ICMP breaks with RFC 1812 and is generally anti-social, but it can be a good idea security-wise. Feel free to comment below if you have a point of view on this.

There is an easy way to test whether these ports are blocked on your firewall: The latest version of Metasploit Pro includes a Firewall Egress Testing MetaModule that contacts an external server on any TCP ports you specify and provides you with a report of open, filtered, and closed ports. It's so easy to use that it doesn't really require an explanation - here's a screenshot of the interface: 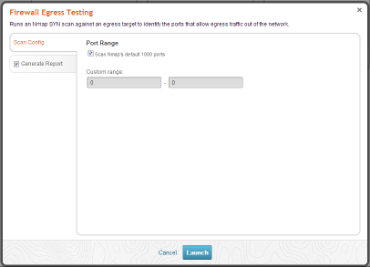 If you'd like to test out Metasploit Pro's new Firewall Egress Testing MetaModule, you can get a Metasploit trial version on the Rapid7 website.