Google No Longer Provides Patches for WebView Jelly Bean and Prior

Over the past year, independent researcher Rafay Baloch (of "Rafay's Hacking Articles") and Rapid7's Joe Vennix have been knocking out Android WebView exploits somewhat routinely, based both on published research and original findings. Today, Metasploit ships with 11 such exploits, thanks to Rafay, Joe, and the rest of the open source security community. Generally speaking, these exploits affect "only" Android 4.3 and prior -- either native Android 4.3, or apps built with 4.3 WebView compatibility. 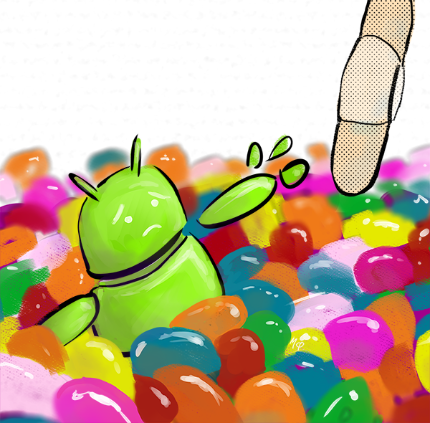 WebView is the core component used to render web pages on an Android device. It was replaced in Android KitKat (4.4) with a more recent Chromium-based version of WebView, used by the popular Chrome browser.

Despite this change, though, it's likely there will be no slow-down of these Android security bugs, and they will probably last a long time due to a new and under-reported policy from Google's Android security team: Google will no longer be providing security patches for vulnerabilities reported to affect only versions of Android's native WebView prior to 4.4. In other words, Google is now only supporting the current named version of Android (Lollipop, or 5.0) and the prior named version (KitKat, or 4.4). Jelly Bean (versions 4.0 through 4.3) and earlier will no longer see security patches for WebView from Google, according to incident handlers at security@android.com.

Up until recently, when there's a newly discovered vulnerability with Android 4.3, the folks at Google were pretty quick with a fix. After all, most people were on the "Jelly Bean" version of Android until December of 2013. Jelly Bean's final release was just over a year ago in October of 2013. This is why this universal cross-site scripting bug was fixed, as seen in the Android changelog and Rafay's blog, Rafay Hacking Articles.

However, after receiving a report of a new vulnerability in pre-4.4 WebView, the incident handlers at security@android.com responded with this:

If the affected version [of WebView] is before 4.4, we generally do not develop the patches ourselves, but welcome patches with the report for consideration. Other than notifying OEMs, we will not be able to take action on any report that is affecting versions before 4.4 that are not accompanied with a patch.

So, Google is no longer going to be providing patches for 4.3. This is some eyebrow-raising news.

I've never seen a vulnerability response program that was gated on the reporter providing his own patch, yet that seems to be Google's position. This change in security policy seemed so bizarre, in fact, that I couldn't believe that it was actually official Google policy. So, I followed up and asked for confirmation on what was told to the vulnerability reporter. In response, I got a nearly identical statement from security@android.com:

If the affected version [of WebView] is before 4.4, we generally do not develop the patches ourselves but do notify partners of the issue[...] If patches are provided with the report or put into AOSP we are happy to provide them to partners as well.

When asked for further clarification, the Android security team did confirm that other pre-KitKat components, such as the multi-media players, will continue to receive back-ported patches.

Sorry, Jelly Bean, You're Too Old

Google's reasoning for this policy shift is that they "no longer certify 3rd party devices that include the Android Browser," and "the best way to ensure that Android devices are secure is to update them to the latest version of Android." To put it another way, Google's position is that Jelly Bean devices are too old to support -- after all, they are two versions back from the current release, Lollipop.

On its face, this seems like a reasonable decision. Maintaining support for a software product that is two versions behind would be fairly unusual in both the proprietary and open source software worlds; heck, many vendors drop support once the next version is released, and many others don't have a clear End-Of-Life (EOL) policy at all. (An interesting side note: neither Google nor Apple have a published EOL policy for Android or iOS, but Microsoft and BlackBerry provide clear end of life and end of sales dates for their products).

Most Android Devices Are Vulnerable

While this may be a normal industry standard, what's the situation on the ground? Turns out, the idea that "pre-KitKat" represents a legacy minority of devices is easily shown false by looking at Google's own monthly statistics of version distribution:

As of January 5, 2015, the current release, Lollipop, is less than 0.1% of the installed market, according to Google's Android Developer Dashboard. It's not even on the board yet.

The next most recent release, KitKat, represents about two fifths of the Android ecosystem. This leaves the remaining 60% or so as "legacy" and out of support for security patches from Google. In terms of solid numbers, it would appear that over 930 million Android phones are now out of official Google security patch support, given the published Gartner and WSJ numbers on smartphone distribution).

The Economics of Upgrading

Beside the installed bases, I posit that the people who are currently exposed to pre-KitKat, pre-Chromium WebView vulnerabilities are exactly those users who are most likely to not be able to "update to the latest version of Android" to get security patches. The latest Google Nexus retails for about USD$660, while the first hit for an "Android Phone" on Amazon retails for under $70. This is a nearly ten-fold price difference, which implies two very different user bases; one market that doesn't mind dropping a few hundred dollars on a phone, and one which will not or cannot spend much more than $100.

Taken together -- the two-thirds majority install base of now-unsupported devices and the practical inability of that base to upgrade by replacing hardware -- means that any new bug discovered in "legacy" Android is going to last as a mass-market exploit vector for a long, long time.

This is great news for penetration testers, of course; picking company data off of Android phones is going to be drop-dead easy in many, many cases, and I fully expect that handsets will be increasingly in-scope for penetration testing engagements. Unfortunately, this is great news for criminals for the simple reason that, for real bad guys, pretty much everything is in scope.

Open source security researchers routinely publish vulnerability details and working exploits with the expectation that this kind of public discussion and disclosure can get both vendors and users to take notice of techniques employed by bad guys. By "burning" these vulnerabilities, users come to expect that vendors will step up and provide reasonable defenses. Unfortunately, when the upstream vendor is unwilling to patch, even in the face of public disclosure, regular users remain permanently vulnerable.

Roll Your Own Patches?

It's important to stress that Android is, in fact, open source. Therefore, it's not impossible for downstream handset manufacturers, service providers, retailers, or even enthusiastic users to come up with their own patches. This does seem to happen today; a 4.3 vulnerability may affect, say, a Kyocera handset, but not a Samsung device with the "same" operating system.

While this is one of the core promises of open source in general, and Android in particular, it's impossible to say how often this downstream patching actually happens, how often it will happen, and how effective these non-Google-sourced patches will be against future "old" vulnerabilities.

The update chain for Android already requires the handset manufacturers and service carriers to sign off on updates that are originated from Google, and I cannot imagine this process will be improved once Google itself has opted out of the patching business. After all, is AT&T or Motorola really more likely to incorporate a patch that comes from some guy on the Internet?

No Patches == No Acknowledgement

To complicate matters, Google generally does not publish or provide public comment on Android vulnerabilities, even when reported under reasonable disclosure procedures. Instead, Android developers and consumers rely on third party notifications to explain vulnerabilities and their impact, and are expected to watch the open source repositories to learn of a fix.

For example, Google's only public acknowledgement of CVE-2014-8609, a recent SYSTEM-level information disclosure vulnerability was a patch commit message on the Lollipop source code repository. Presumably, now that Google has decided not to provide patches for "legacy" Android WebView, they will also not be providing any public acknowledgement of vulnerabilities for pre-KitKat devices at all.

Google's engineering teams are often the best around at many things, including Android OS development, so to see them walk away from the security game in this area is greatly concerning.