How to leverage the command line in Metasploit Pro

"I'm more comfortable with the Metasploit command line," is an objection I often hear from long-time Metasploit Framework users who are thinking about purchasing a copy of Metasploit Pro or Metasploit Express. What many penetration testers don't know is that you can use the command line in the commercial Metasploit editions, and leverage their advantages at the same time.

Reporting: The commercial Metasploit editions include one-click reporting that includes any work you have completed on the command line. No more cutting and pasting screenshots and collecting password hashes. Simply conduct your penetration test on the command line, then generate the reports - either through the command line or the Web UI. Note that the FISMA and PCI reports are exclusive to Metasploit Pro, while all other reports such as the executive report are available in all commercial editions.

Switching between Web UI and command line: You can switch between the Web UI and the command line version of Metasploit for various tasks, depending on which tool is better suited for which task. For example, you can work with the Web UI to discover the network and import scan data, switch to Metasploit Framework to do exploitation, and keep an overview of your sessions in the Web UI. You don't have to choose interface over another - just use them as two sides of the same tool. 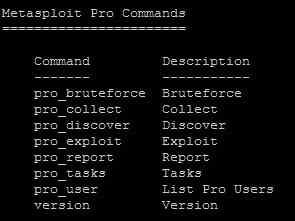 Some Metasploit Pro features are not yet implemented in the command line, such as web application scanning, auditing and exploitation as well as the social engineering campaigns.

When using the Metasploit command line with the commercial features, please ensure that you are using the stable trunk, which shares the database with the Web UI, not the development trunk. To access a console that uses the stable trunk, launch the 'Metasploit Console' link in Windows or the /opt/metasploit-4.1.3/msfpro executable on Linux. For more information, see this discussion.