A recent blog explored the importance of logging in general in terms of IoT devices. It also cited predictions that a huge number (50 billion) of IoT devices are expected to exist by 2020. While Machine to Machine(M2M) communicatio 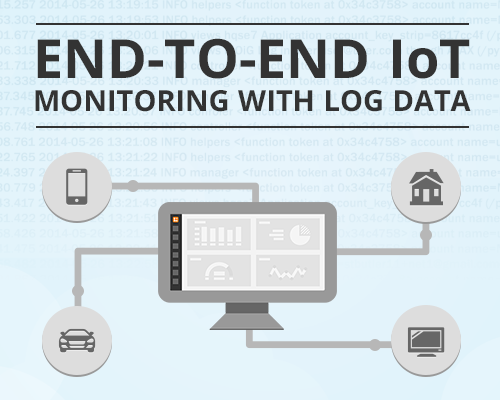 n is a related area, the IoT is all about extending the Internet to systems and even low power devices.

While there is uncertainty about the exact nature of how these devices will be networked and how their data will be used, there is no doubt that huge opportunities exist.

In our earlier post we claimed that Logs and IoT as being “two peas in a pod.” We find this to be true because:

In terms of requirements, IoT systems require the ability:

Again, this is similar to the requirements of a log system. As an illustration, the following diagram shows how the Logentries DataHub can be usedto collect logs on a customer site and send them to Logentries. If I replace “Datahub” with “WSN Gateway”, “Webserver” with “IoT device” and “Logs” with “Timestreamed Sensor data”, then I think the similarity is clear.

What areas will IoT be valuable?

Where do we begin…?

Other areas include environmental monitoring, logistics, people-centered sensing and a large number of possible use cases are discussed at http://www.wired.com/2013/05/internet-of-things-2/all/

Why is now a good time to consider IoT?

WSN devices have been around for a while and we haven’t seen huge growth yet, in spite of previous predictions, e.g. it is worth noting that The Economist’s article “When Everything Connects”  is from 2007. This is partly due to the fact that much of the focus to date has been on the cost, performance and reliability of the devices and Wireless Sensor Networks themselves. There are, however, a number of reasons that suggest this promised growth in IoT is not far away:

So progress is being made on frameworks to enable IoT devices to wirelessly connect and overcome the often limited processing capabilities and limited connectivity (to conserve battery life) of those devices.

The key point is that what is needed now are end-to-end architectures and services that can actually gather and analyze this data at scale and relatively easily. This is necessary to support the growth of new devices and particularly new use cases and applications, without requiring unduly large cost or risk.

What this means for IoT End-to-End?

One approach to handling the range of input IoT data is to try to standardize and normalize the diverse data inputs for storage using application domain knowledge or standards and semantic processing, e.g. some research projects are looking at using RDF type approaches to do this .

Another approach is to accept the diversity of devices and use an infrastructure that can handle such diversity and provide visualisation of, and analytics on, that data. This would use tools from the Big Data area to build a solution to handle the scale and diversity. A recent article on Kafka gives an overview of IoT and an example of the role Kafka could play along with other big data solutions. It shows the potential of such solutions for those with the resources and time to pursue this. A more academic example of an architecture using HBase to gather IoT data is shown at http://www.cs.ucc.ie/~cjs/docs/2013/dpmss2013.pdf

The relative immaturity of standards in this area and the diversity of devices (and commercial interests) mean that it is not clear which protocols or formats will emerge as de facto standards or what will be killer applications. Hence, IoT developers, users and applications need systems that can handle a changing range of protocols and data formats at large scale. This means that the two approaches above are not ones I favor at this point.

The similar characteristics of log data and IoT data suggested above does, however, mean that a flexible cloud based solution for logs is a good choice for sensor data too. This is even more sensible when we consider that the IoT community and early stage developers can benefit from the cost savings and convenience of using a log service shared by a large number of existing log users. It will also allow them to use the analysis and visualization tools of that service to allow them to explore their IoT application area and products more quickly, which is vital given the early stage of development of this area.