Don't Get Blindsided: Better Visibility Into User and Asset Risks with Metasploit 4.8

Not having visibility can be dangerous in many situations. The new Metasploit 4.8 gives you better visibility in four key areas:

See Phishing Exposure as One Factor of User Risk

Users are often a weak part of the security chain, exposing organizations to attacks. This has led to a change in attacker methodology from brute force system-based attacks to deception-oriented attacks.  Especially phishing has seen a rise in recent years. Many organizations already conduct end-user trainings but find it challenging to determine how vulnerable their users really are and which users pose the largest risk. 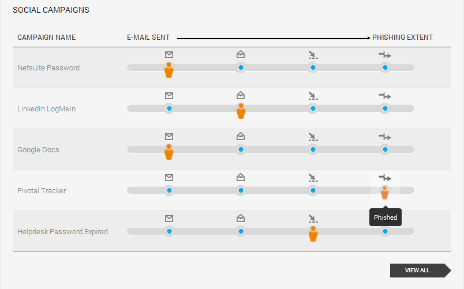 Rapid7 Metasploit Pro measures the effectiveness of security awareness trainings by running simulated phishing campaigns and integrates with Rapid7 UserInsight to provide this information in the context of a more comprehensive user risk, including network access, cloud service usage, and compromised credentials.

Metasploit Pro is the only phishing simulation solution that integrates with a solution to provide insight into user activity and risk. Unlike alternative penetration testing solutions, Metasploit Pro's social engineering reports provides conversion rates at each step in the campaign funnel, such as how many people clicked through a phishing email, how many entered username and password on a fake website, and how many systems were compromised. Only Metasploit provides advice on how to address risk at each step in the social engineering funnel.

While some phishing simulation services can only measure user awareness, Metasploit Pro can also measure the effectiveness of technical controls. If desired, phishing web pages or email attachments can contain exploits that test patch levels, security configurations, and network-based defenses.

See which vulnerabilities pose the biggest risk to your organization 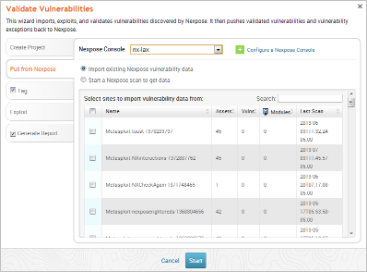 Vulnerability scanners can determine installed software and its vulnerabilities but not whether it poses a real risk in the context of your network. This is dangerous and wasteful because IT teams need to fix all vulnerabilities with equal priority.

Vulnerability validation helps you to determine if a vulnerability poses a high risk to your environment. It focuses on vulnerabilities with known public exploits that provide an easy way into your network - even for less experienced attackers.

Nexpose and Metasploit Pro seamlessly integrate to streamline the vulnerability validation workflow. It creates a closed-loop security risk assessment solution so that you can find potential vulnerabilities, exploit them, and identify the security flaws that pose a real threat to a network. 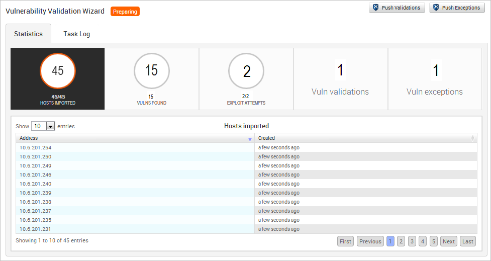 Unlike other solutions, that require a manual XML export and import of vulnerability data, Metasploit Pro can pull existing scan data directly from Nexpose, through a supported API.

If you're interested to hear more about vulnerability validation and see a live demo, join our free webcast "Don't Trust, Validate! How to Determine the Real Risk of Your Vulnerabilities."

Have all host information at your fingertips when doing a pentest

While penetration testers are used to bending technology to suit their needs, solving difficult tasks is not an end it itself. Especially in large penetration tests, it can be challenging to manage a lot of data efficiently and without losing the overview. These difficulties can quickly cause longer work hours and overdue projects.

Metasploit Pro makes it easier to carry out standard tasks and to manage the vast amount of information collected during a penetration test. This directly translates into time savings and a reduced training need for new staff. For example, Metasploit Pro manages data by tracking active projects, importing results from other sources, and now allowing manual input.

Metasploit Pro makes it much easier than Metasploit Framework to handle large penetration tests and bring new staff on board.

First off, we have 128 new modules since 4.7's release back in July (and you get bonus secgeek points if that count makes you a little nervous). That comes in at just about one and a half new modules a day, every day, since July 15. These modules are all over the place, since most of them come in unannounced to be cleaned up and put to work like so many Dickensian orphans. However, some themes did shake out with what we pursued in exploit-land for this release.

We have eight new modules targeting SOHO routers and access points, from Michael Messner, Craig Heffner, Brandon Perry, and Juan Vazquez. SOHO router hacking has been a focus for Metasploit for about a year now, and we're still championing the idea that if you have work-from-home employees, or even high-priority targets like the CFO's laptop, SOHO routers like these should be in scope for your engagement. It's a discussion worth having, and the availability of Metasploit modules can help a penetration tester make his case.

There are 24 new modules that exploit ZDI-disclosed vulnerabilities, 20 of which saw a bunch of work from Juan Vazquez, who I swear doesn't have it in for HP. It just so happens that over half of these ZDI vulns are targeting HP enterprise server software, including StorageWorks, LoadRunner, IMC, and Procurve Manager. ZDI bugs are great targets for exploit developers, because they represent popular software that you're likely to find in the enterprise, so penetration testers get a lot of mileage out of these.

This release was unique among most in that there are some really neat new payloads; we now have new shell bind and reverse shell payloads in Lua and Node.js from xistence and Joe Vennix, respectively. These go along with our usual bash, VBS, Perl, Python, and assorted other language shells. If your client's IDS/IPS/AV vendor isn't paying attention, these new shell spawners might slip past their tried-and-true defenses. That said, I have to say that the most exciting new payload is a Python implementation of Meterpreter from Spencer McIntyre. This brings more Meterpreter functionality to pretty much any standard Linux build, and is getting much more active development than our old C-based POSIX Meterpreter.

Oh, yes, and there's good old Windows Meterpreter. We've made huge improvements there, thanks to some phenomenal focused effort from OJ "TheColonial" Reeves. OJ has brought Meterpreter (sometimes kicking and screaming) to the modern era of C development, with a completely revamped build environment (using the free edition of Microsoft Visual Studio 2013) and continuous integration platform. Along the way, he smashed a huge pile of bugs and annoyances, both internally and externally reported. What this all means to users is that Meterpreter is slightly smaller and *much* more stable now, *and* it's totally amenable to open source C development. The days of having to incorporate every change with the tribal knowledge of James "Egypt" Lee and HD Moore are pretty much over.

For exploit developers, we have a bunch of new brand new libraries for use: FireFart's WordPress manipulation API makes WP-specific assessments much easier, and Meatballs' WDSCP protocol library takes advantage of insecure Windows Deployment Services (are there any other kind?) to get a quick foothold in a WDS-imaged enterprise. Meatballs also contributed a handful of new binary templates for use with payload generation, including templates for PowerShell, VBA, MSI installers, and more, all of which complicate Metasploit's relationship with the various anti-virus vendors.

Of course, that's not all, but those are the headline features for Metasploit Framework 4.8.0. We landed over 2,300 commits since mid-July; the summary above and the modules below represent the most visible changes. But with nearly a hundred non-Rapid7 people who got commits into the master repository for Metasploit Framework, it's really pretty impossible to give a complete rundown of every cool new thing that hit; for that, you can start by looking at the last four or five months' worth of blog posts, or even better, peruse the git shortlog (from your nearest git clone, type 'git shortlog 4.7.0...4.8.0').

So, thanks to all the volunteers listed below for all your commits (and commitment!) to our collective open source security product, sorted by commit count, then alphabetically by first name or handle. You guys make Metasploit go.

And It's All Available Now