Rapid Fire returned for the third time to the UNITED Security Summit and once again brought together the infosec community to join the spirited debates. With great questions and participation from the audience, the Rapid7 team would like to first thank everyone who attended this evening – from our customers and UNITED attendees, to the Boston infosec community.

Our panel this year featured: 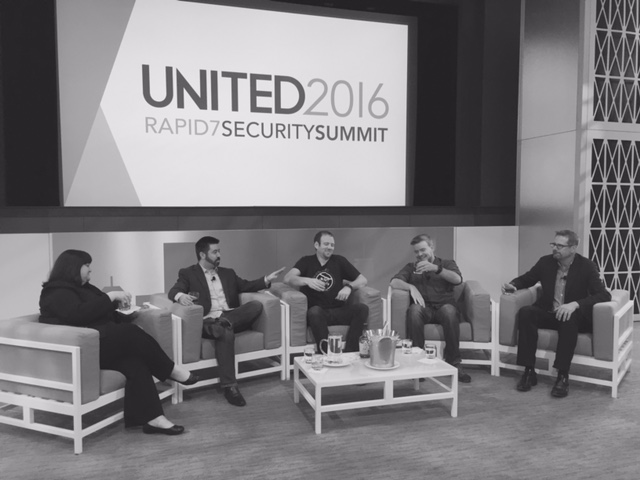 What exactly is Rapid Fire? It's a lively debate between some of the brightest minds in the security industry where divisive topics are thrown out and panelists must then create a convincing argument for or against the statement – regardless of their (or their employer's) actual opinion. Since someone is inevitably arguing against himself, it makes for a few amusingly awkward moments and only gets more entertaining as the night goes on as the audience votes on who argues most convincingly and the loser has to drink. (Drink of choice this year: Buffalo Trace bourbon). In an added twist the audience played along by filling out ”buzzword Bingo” cards, checking off the box anytime a panelists spouted words like “machine learning,” “encryption,” ”SSH,” and more.

Here's a sampling of some of the questions our panelists were tasked with arguing this year:

The audience contributed a few controversial topics as well. Some of these included:

As the rounds went on (both debate and beverage), the arguments got more interesting although less convincing. More than once panelists would ask “What side am I arguing again?” One thing was clear from these debates: all of the panelists on stage know their stuff and are helping drive the important conversations within the security industry.

Check out a clip featuring some of the funniest moments from Rapid Fire below and be sure to follow #UNITEDSummit for more highlights from the conference.