This blog post was previously published on VentureFizz and was written by Christina Luconi, chief people officer at Rapid7. It is part of an ongoing series on how Rapid7 leadership approaches—and upholds—company culture.

This is a start to a rough travel week. I woke up, left for the airport at 4:10 a.m., and spent the day in our D.C. office, which included a town hall and a ribbon-cutting to celebrate our beautiful new space. After, I hopped in an Uber with two others and rushed to the airport to catch our flight. Delayed. Put on standby for an earlier flight. Another delay.

My exceptionally thoughtful CEO was the only person elected from the standby list to board. He gave me his seat so I could get home to my kids. One and a half hours later, and I was still stuck on the tarmac, and all routes to Boston were shut down because of the weather. And I get to go to NYC this weekend and London on Monday. Yup, business travel is not at all glamorous.

However, with every rainy cloud that prevented me from getting home at a reasonable hour comes a silver lining. Tonight, my gratitude comes from a deep appreciation for the people I work with. Typically, it’s not lost on me how great they are, but tonight, one simple observation turned my travel frown upside down.

First, let me explain our executive team. The average tenure of people on our executive team at Rapid7 is 5.6 years (I removed our co-founder, Tas Giakouminakis, from this average, as he’s been here since the start and would throw the numbers waaaay off). Often asked why a self-proclaimed startup junkie would stay put for more than eight years, my response is simple: “The people.”

Sure, I work with almost 1,400 smart, talented, and committed people. However, at a gut level, I have two teams that keep me inspired: our incredible people strategy team (whom I have the honor of leading), and our executive team, with whom I share company leadership. Tonight, I write about the latter.

The long tenure of this team, I believe, is a significant indicator of how committed to Rapid7 and each other we all are—not just in a “please take my standby seat” way (which is arguably the kindest thing anyone has done for me in a long while), but in a more meaningful “Hey, we are on this journey together, so let’s make the most of the ride” kind of way. With all that time spent together, we’ve supported career milestones and challenges. We’ve lived through each other’s increased responsibilities and scope, as well as stumbles and the inevitable missteps that come with our rapid growth. And because we spend so much time together, we’ve also seen each other through divorces and health scares, as well as the more joyous victories of our children’s accomplishments and the purchase of that car we had dreamed about and worked our butts off to finally earn.

In other words, these are my people. We have a shorthand with each other, and even though we are all different in significant ways, they are just as much family to me as my own blood. When I have a bold idea, they are the people who jump in and help me advance it further, rather than roll their eyes at me. When I am struggling with a problem, they are my trusted advisers I look to for their sound counsel. When I have a win, they are the first to cheer me on. As we each take turns on the high wire, the rest form the safety net below. I am unabashedly my true self with them, without reservation.

Any person would be lucky to work on a team that brings out the best in each other. However, the fact that this crew forms our company’s leadership team is even more significant to me. Of course, we aren’t perfect, and sometimes we drive each other crazy. More often than not, though, we can be found pushing each other to do our best work. For every high-five that comes with a win, we will also take the time to share constructive feedback to aid each other along. Rather than watch our backs in fear that someone is going to backstab us, we actively seek out each other’s opinions because we know it will result in a better outcome. This mode of operating is deeply rooted in trust, and a whole lot of time spent building something we all care passionately about. And because we all behave this way, we model it for the rest of our company. The bar is set for what healthy teaming looks like, and not surprisingly, we hold each other and our teams accountable for that as well.

Tonight, I sat at an airport restaurant table with two of these cherished colleagues/brothers/friends, waiting to learn the fate of our flight home. As we ordered dinner and shared ideas, we mindlessly munched on a communal bowl of chips and salsa. We were in the middle of a conversation about how insecurity leads to risk avoidance, and how detrimental those traits can be in leaders of growing companies.

Then, Corey looked down and said, “That’s the mark of a good team.”

Lee and I likely looked at him like dogs with their head cocked to the side, trying to figure out what he was talking about.

“Look at the chip bowl,” he explained. “This is why we are a good team. All that’s left in the bowl are a bunch of broken chip pieces and one good last whole chip. We are all nibbling at the crumbs, and we all avoided that last chip, rather than take it for ourselves.”

With all the work I’ve done studying teams and leadership, that last chip observation kind of summed up this team perfectly. It’s all about the “we,” not the “me.”

As I sat on the tarmac, eager to get home and sleep in my own bed, I reflected on just how fortunate I am to work with such an incredible team. We all have strengths, as well as flaws, but somehow, we just seem to bring out the best in each other. That is a huge reason why I’ve stayed at Rapid7 for eight years—that, and the fact that when we all got up to head to the gate, the single remaining chip was still in the bowl.

Interested in joining our herd? Find the right position to kick-start or further your journey at Rapid7!

Christina Luconi is the Chief People Officer at Rapid7. She has a leading approach to HR and a strong commitment to recruiting stellar talent, corporate culture, and acquisition integration. 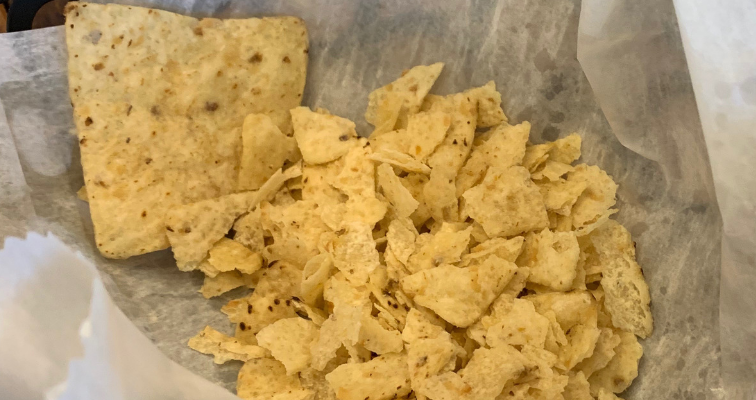