As one of Heroku’s beta users I had the chance to check out the new Heroku button gallery last week. I must say I was very pleasantly surprised.

Over the past few years, it’s fair to say Heroku have nailed their PAAS offering. They are one of the few PAAS providers to truly succeed in providing developers both an easy to deploy platform, and a full ecosystem of add ons. This allows you as a developer to get on with what you do best.

Yes, you can actually spend your time developing your apps. 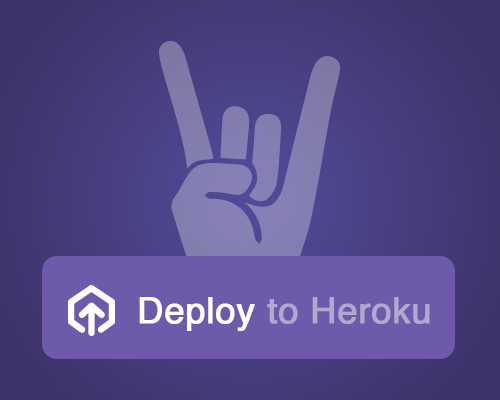 An email arrived in my inbox last week, asking me as a beta Heroku customer, to check out their new heroku button gallery. Less than 5 mins later I had deployed 2 new Heroku apps.

10 mins later I had deployed 2 Heroku add ons (naturally one of these was Logentries – the other was New Relic as I also wanted to check out our new integration) and was looking under the hood of my new apps checking out exactly what was going on. I was building graphs, had created some nice visualizations … after 15 mins… my level of excitement was starting to worry my co-workers….

‘Think about it,”  I proclaimed, “how powerful is this?”

Within the click of a button you can have custom apps deployed to the cloud, publicly facing, with all your add-ons hanging off them, measuring what is going on, who is using your new app, what features are being used, what the performance looks like… and not a developer in sight…

Checking out my app performance using the Logentries Add-on

I had to admit, it made me feel pretty good – in 15 mins… I had 2 new apps deployed and usable by the world, had my monitoring and metrics set up (via some add ons), had checked out some cool new tech and it was only 7:15 ET on a Tuesday morning….

After the dust settled, I got thinking about this, and am really interested to see where this ends up.

This is something that I have been looking for such a long time.

Selfishly, so many times I need some sample apps to kick off tests to look at the logs and to showcase to a customer or prospect and what ALWAYS gets in the way is the effort to spin up an AWS instance, setup some app running on tomcat/nginx/jboss etc. hook up a DB etc. before I can do any meaningful tests/experiements/demo.

Once upon a time, I could do this in about 10 mins and it wasn’t a big hurdle, but once you are out of practice, remembering how to deploy the jar/war file on a given web server, finding the right folders, configuring some XML can take you a few hours and you often end up calling up one of the dev team to assist…. Those days are now gone…

It's a one button set-up!

I have to think if this solves my selfish (and somewhat menial) use case, this is going to be super powerful for companies that need to bring up and down new apps regularly for their clients.

I’m looking forward to seeing how this kicks off – but my gut tells me this is going to be big!

If you want to give it a try just click the button below.