WannaCry Update: Vulnerable SMB Shares Are Widely Deployed And People Are Scanning For Them (Port 445 Exploit)

Last week the WannaCry ransomware worm, also known as Wanna Decryptor, Wanna Decryptor 2.0, WNCRY, and WannaCrypt started spreading around the world, holding computers for ransom at hospitals, government offices, and businesses. To recap: WannaCry exploits a vulnerability in the Windows Server Message Block (SMB) file sharing protocol. It spreads to unpatched devices directly connected to the internet and, once inside an organization, those machines and devices behind the firewall as well. For full details, check out the blog post: Wanna Decryptor (WannaCry) Ransomware Explained.

Since last Friday morning (May 12), there have been several other interesting posts about WannaCry from around the security community. Microsoft provided specific guidance to customers on protecting themselves from WannaCry. MalwareTech wrote about how registering a specific domain name triggered a kill switch in the malware, stopping it from spreading. Recorded Future provided a very detailed analysis of the malware's code.

However, the majority of reporting about WannaCry in the general news has been that while MalwareTech's domain registration has helped slow the spread of WannaCry, a new version that avoids that kill switch will be released soon (or is already here) and that this massive cyberattack will continue unabated as people return to work this week.

In order to understand these claims and monitor what has been happening with WannaCry, we have used data collected by Project Sonar and Project Heisenberg to measure the population of SMB hosts directly connected to the internet, and to learn about how devices are scanning for SMB hosts.

Part 1: In which Rapid7 uses Sonar to measure the internet

Project Sonar regularly scans the internet on a variety of TCP and UDP ports; the data collected by those scans is available for you to download and analyze at scans.io. WannaCry exploits a vulnerability in devices running Windows with SMB enabled, which typically listens on port 445. Using our most recent Sonar scan data for port 445 and the recog fingerprinting system, we have been able to measure the deployment of SMB servers on the internet, differentiating between those running Samba (the Linux implementation of the SMB protocol) and actual Windows devices running vulnerable versions of SMB.

We find that there are over 1 million internet-connected devices that expose SMB on port 445. Of those, over 800,000 run Windows, and — given that these are nodes running on the internet exposing SMB — it is likely that a large percentage of these are vulnerable versions of Windows with SMBv1 still enabled (other researchers estimate up to 30% of these systems are confirmed vulnerable, but that number could be higher).

We can look at the geographic distribution of these hosts using the following treemap (ISO3C labels provided where legible): 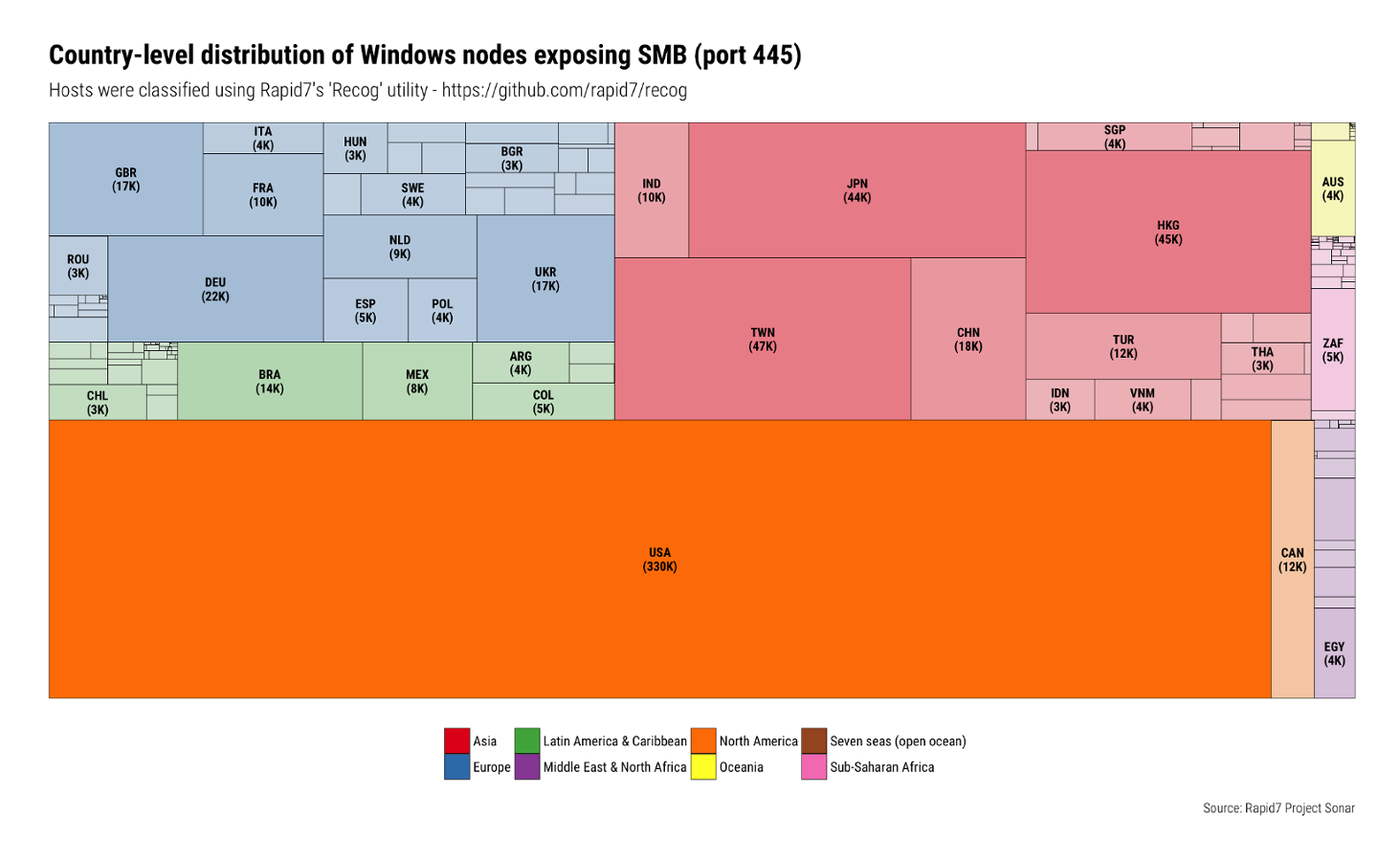 The United States, Asia, and Europe have large pockets of Windows systems directly exposed to the internet while others have managed to be less exposed (even when compared to their overall IPv4 blocks allocation).

We can also look at the various versions of Windows on these hosts: 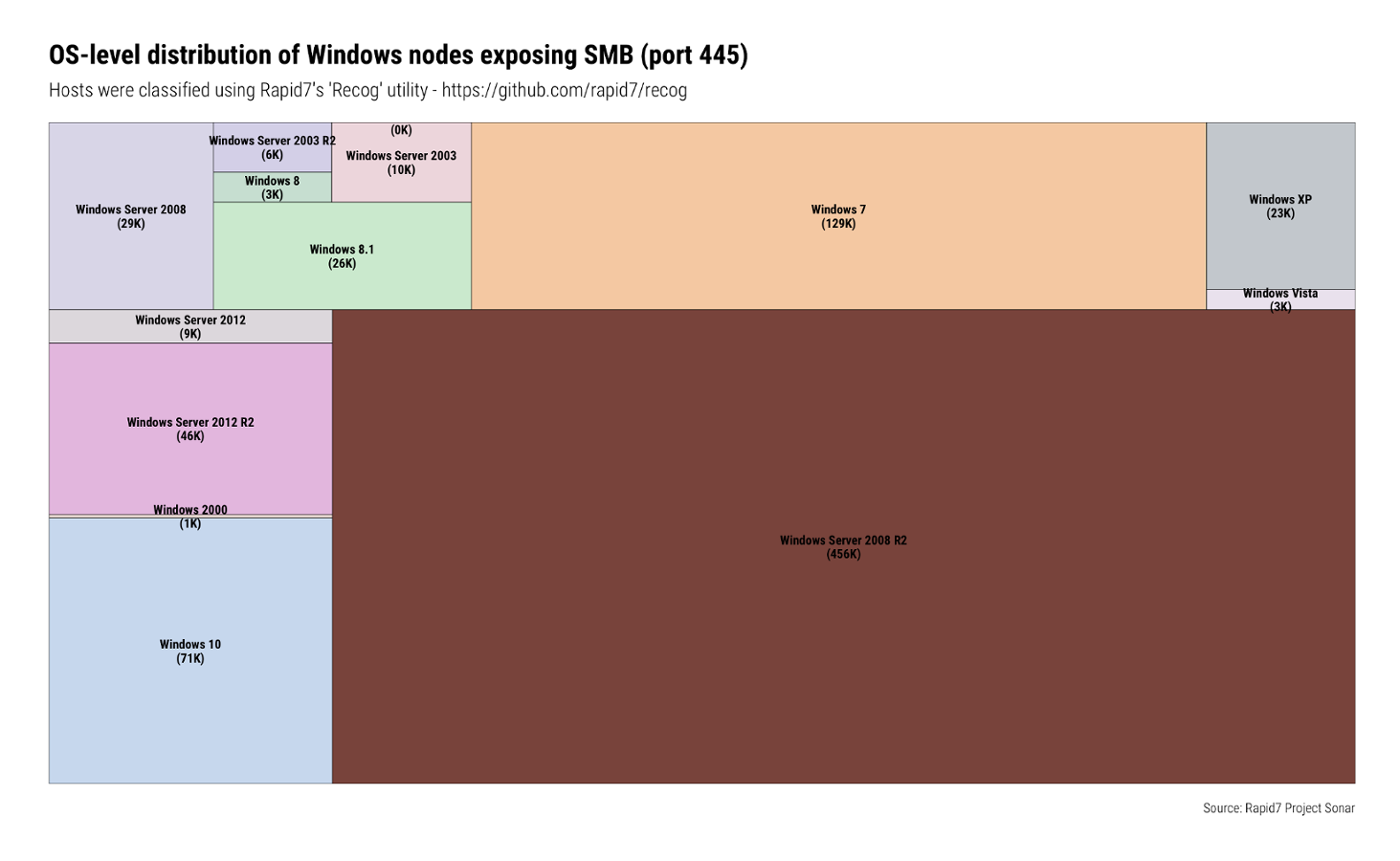 The vast majority of these are server-based Windows operating systems, but there is also a further unhealthy mix of Windows desktop operating systems in the mix—, some quite old. The operating system version levels also run the gamut of the Windows release history timeline: 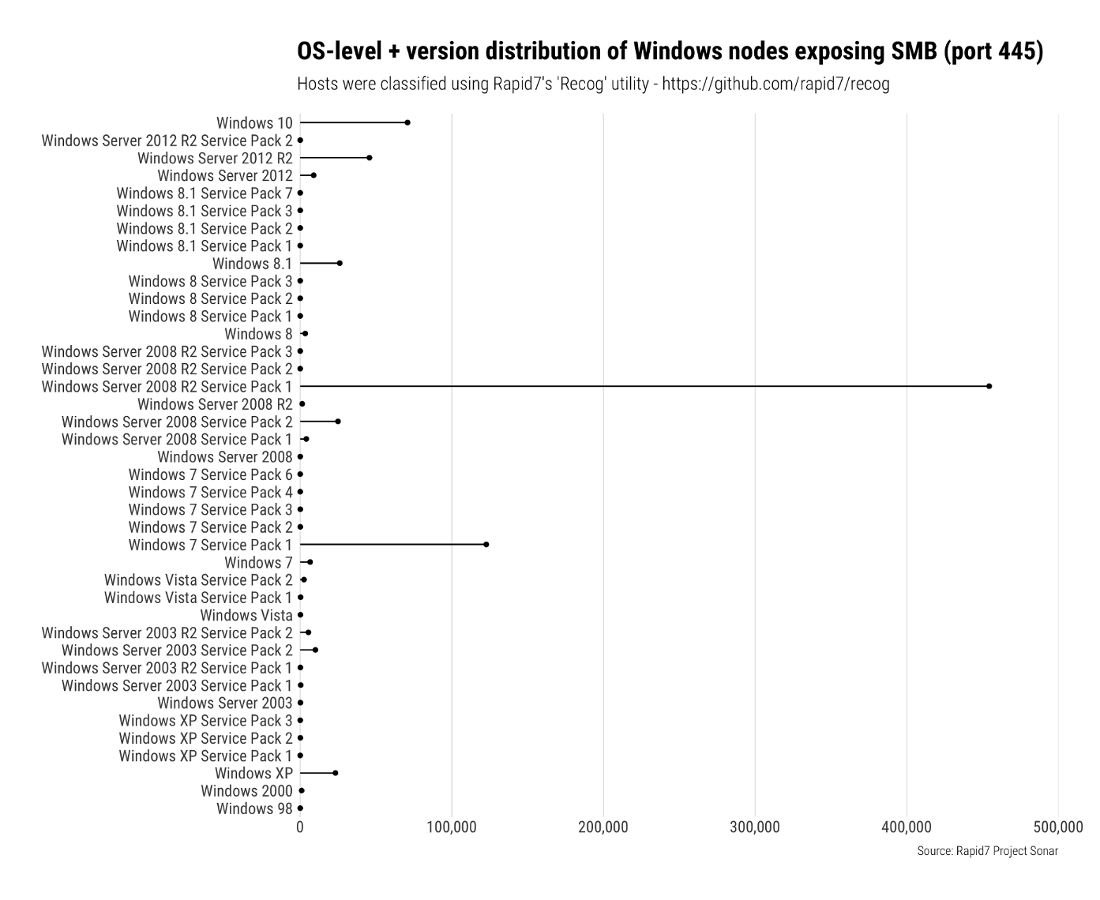 Using Sonar, we can get a sense for what is out there on the internet offering SMB services. Some of these devices are researchers running honeypots (like us), and some of these devices are other research tools, but a vast majority represent actual devices configured to run SMB on the public internet. We can see them with our light-touch Sonar scanning, and other researchers with more invasive scanning techniques have been able to positively identify that infection rates are hovering around 2%.

Part 2: In which Rapid7 uses Heisenberg to listen to the internet

While Project Sonar scans the internet to learn about what is out there, Project Heisenberg is almost the inverse: it listens to the internet to learn about scanning activity. Since SMB typically runs on port 445, and the WannaCry malware scans port 445 for potential targets, if we look at incoming connection attempts on port 445 to Heisenberg nodes as shown in Figure 4, we can see that scanning activity spiked briefly on 2017-05-10 and 2017-05-11, then increased quite a bit on 2017-05-12, and has stayed at elevated levels since. 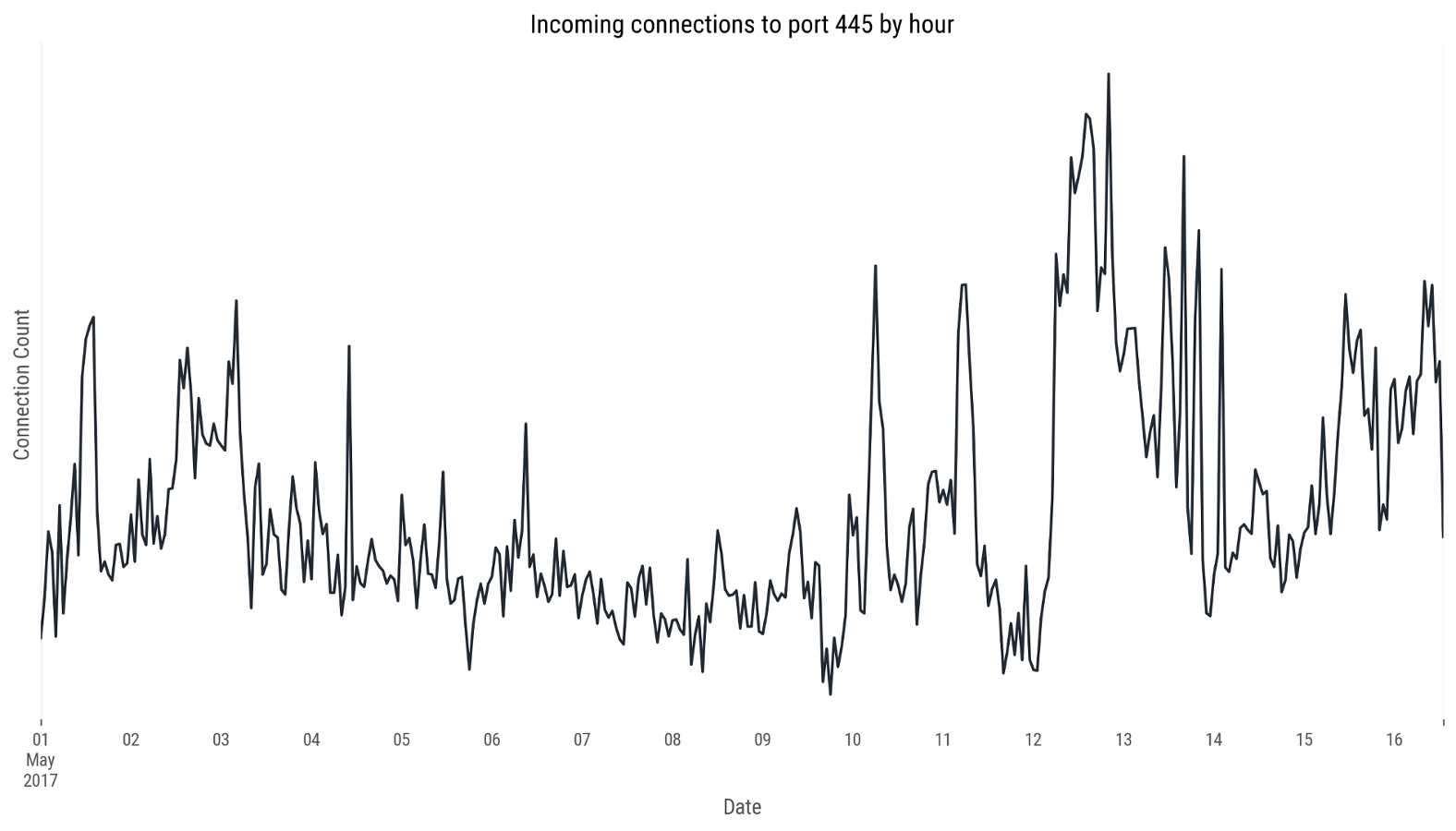 Not all traffic to Heisenberg on port 445 is an attempt to exploit the SMB vulnerability that WannaCry targets (MS17-010). There is always scanning traffic on port 445 (just look at the activity from 2017-05-01 through 2017-05-09), but a majority of the traffic captured between 2017-05-12 and 2017-05-14 was attempting to exploit MS17-010 and likely came from devices infected with the WannaCry malware. To determine this we matched the raw packets captured by Heisenberg on port 445 against sample packets known to exploit MS17-010. 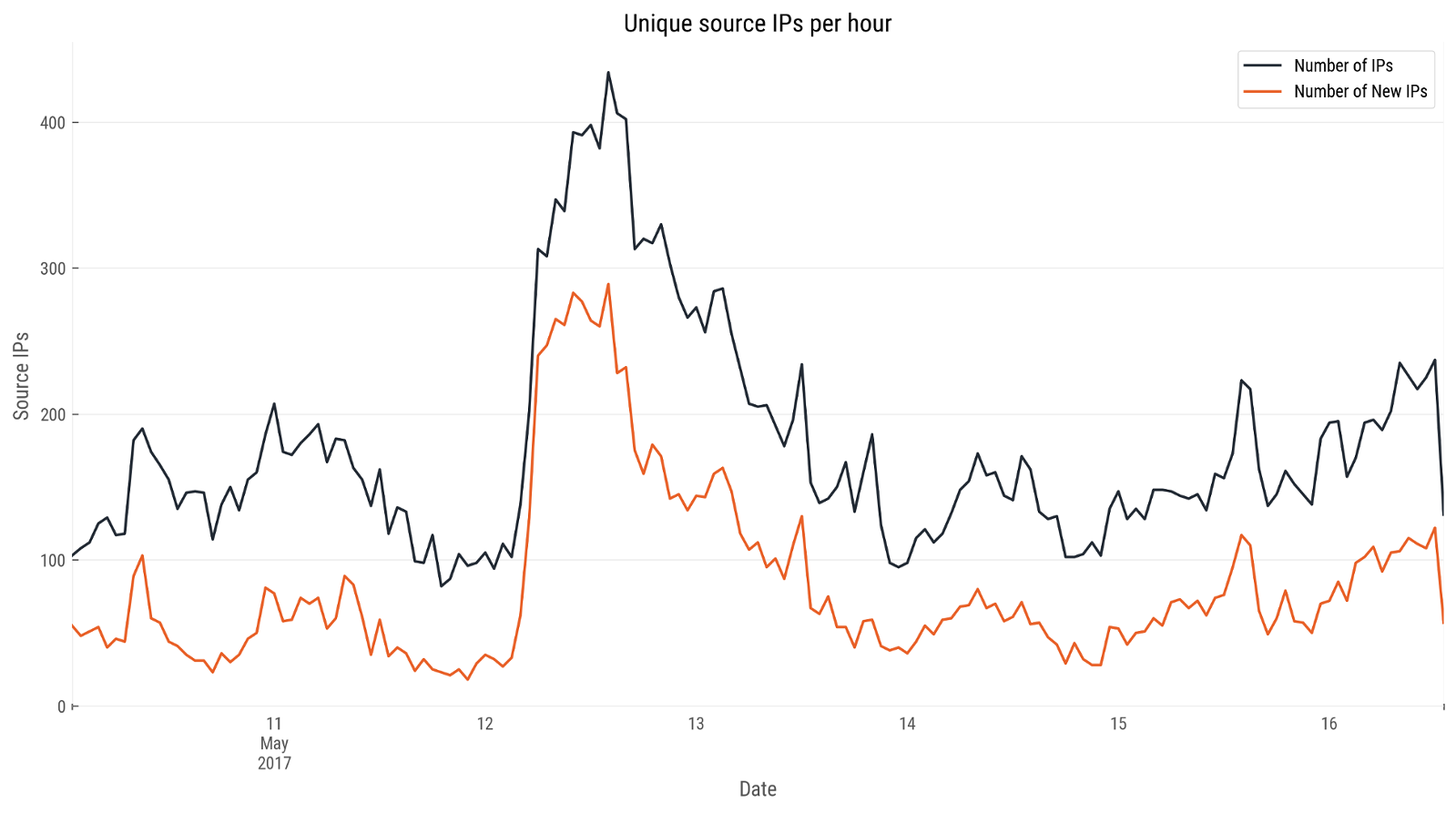 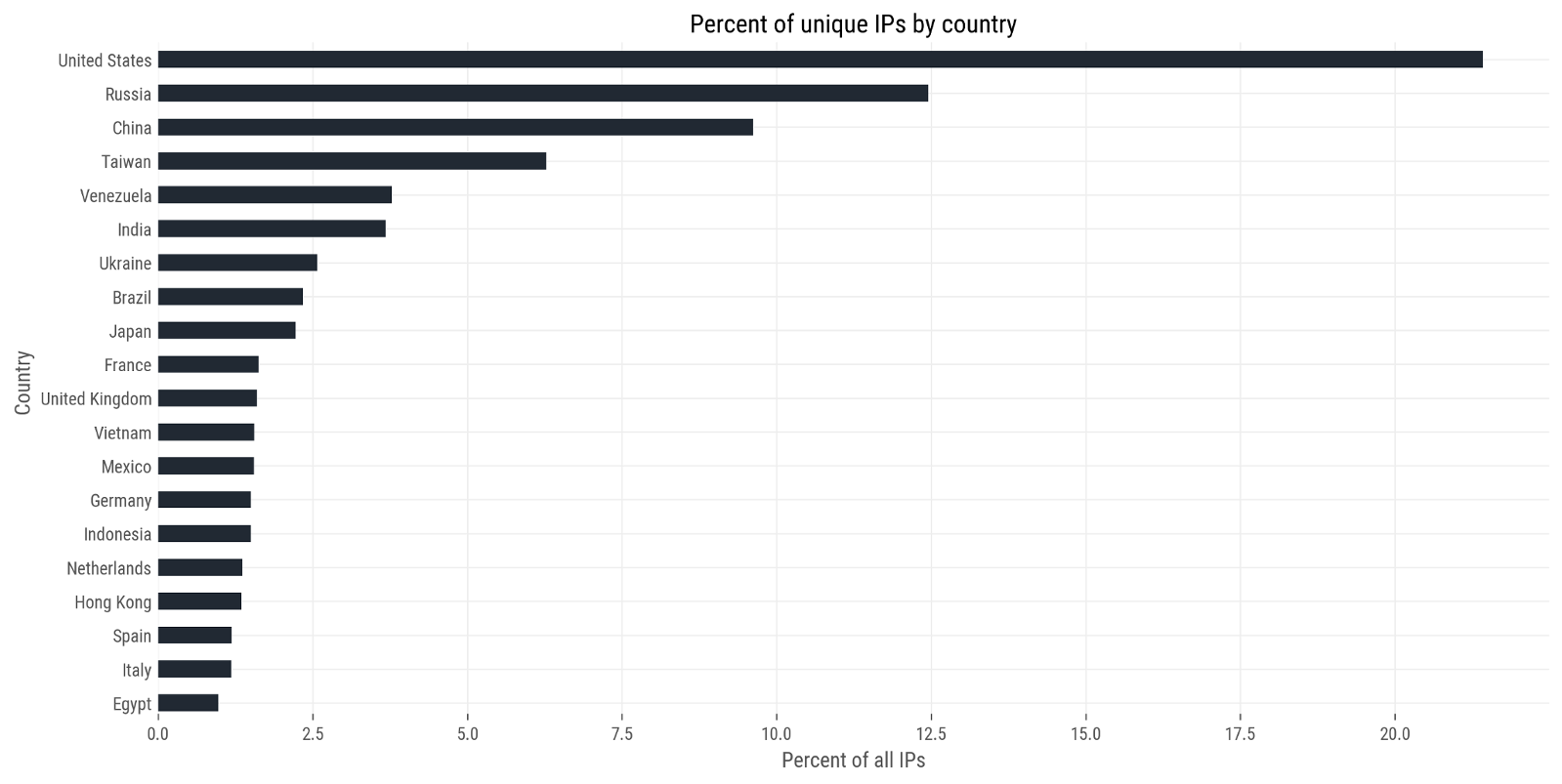 While we have seen the volume of scans on port 445 increase compared to historical levels, it appears that the surge in scanning activity seen between 2017-05-12 and 2017-05-14 has started to tail off.

Using data collected by Project Sonar we have been able to measure the deployment of vulnerable devices across the internet, and we can see that there are many of them out there. Using data collected by project Heisenberg, we have seen that while scanning for devices that expose port 445 has been observed for quite some time, the volume of scans on port 445 has increased since 2017-05-12, and a majority of those scans are specifically looking to exploit MS17-010, the SMB vulnerability that the WannaCry malware looks to exploit.

MS17-010 will continue to be a vector used by attackers, whether from the WannaCry malware or from something else. Please, follow Microsoft's advice and patch your systems. If you are a Rapid7 InsightVM or Nexpose customer, or you are running a free 30 day trial, here is a step by step guide on on how you can scan your network to find all of your assets that are potentially at risk for your organization.

If this sort of information about internet wide measurements and analysis is interesting to you, stay tuned for the National Exposure Index 2017. Last year, we used Sonar scans to evaluate the security exposure of all the countries of the world based on the services they exposed on the internet. This year, we have run our studies again, we have improved our methodology and infrastructure, and we have new findings to share. 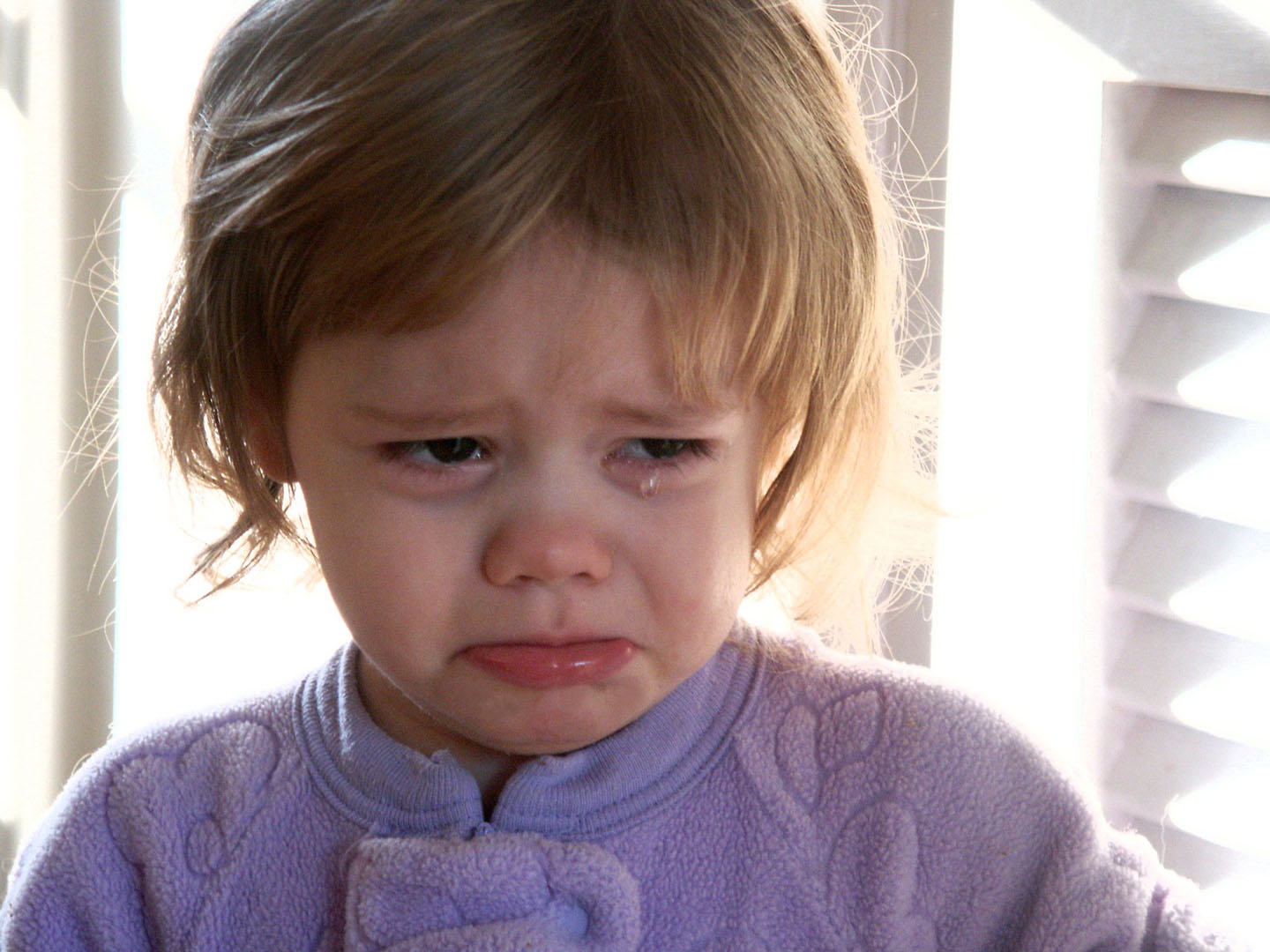 Increasing The Sting of HIVE Ransomware